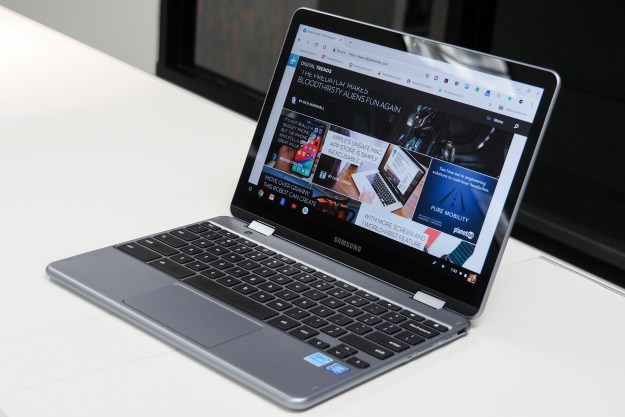 “The Chromebook Plus V2 is a ho-hum Chrome OS entre just as more exciting machines are arriving.”

Samsung is one of the more successful Chromebook makers, with a popular line of Chrome OS notebooks including one of our favorites, the Chromebook Pro. That lineup includes a close cousin of the Pro, the Chromebook Plus, which was recently updated to utilize a faster Intel CPU compared to the previous version’s ARM processor.

We looked at the $500 Chromebook Plus V2, a 2-in-1 that comes equipped with a 12.2-inch IPS display, a Celeron 3965Y, 4GB of RAM, and 32GB of eMMC storage. That’s a common Chromebook configuration with a price point that straddles the fence between budget and premium territories.

There’s a new wave of more innovative and higher-end Chromebooks coming soon, putting the Chromebook Plus V2 in an unenviable competitive position. Does it have any standout features that give it an edge?

The Chromebook Plus V2 looks a lot like its more premium sibling, the Chromebook Pro, but it doesn’t boast quite the same level of material quality. Its lid is aluminum, but Samsung constructed the keyboard deck and bottom with a slightly flexible plastic. It’s plenty solid, but you can spend just a little more money for something like the HP Chromebook x2 and enjoy a more granite-like solidity.

The Plus V2 is a 360-degree 2-in-1, meaning that the display flips all the way around to work as a slightly thick tablet. That gives it four modes in total, including clamshell, multimedia, tent, and tablet, and the Chromebook Plus V2’s hinge is up to the task. The hinge is smooth as you swivel the display but firm enough to hold it in place with only a little wobble, including when you use the pen to tap on the display.

The keys have a pleasant and soft snappiness to them, but they’re a bit shallow and do bottom out.

Regarding its size, the Chromebook Plus V2 once again plants itself in “good but not great” territory. It’s around 0.70 inches thick, which isn’t nearly as svelte as the Chromebook Pro’s 0.55 inches, and it’s a relatively heavy 2.93 pounds compared to its sibling’s 2.38 pounds. The bezels are rather large at the top and bottom, making the notebook’s overall dimensions larger even though it sports a slightly smaller display.

And compared to the Chromebook x2’s tablet portion that’s only 0.33 inches thin and 1.62 pounds, the Chromebook Plus V2 makes for a chunky slate indeed.

One area where Samsung’s pseudo-budget Chromebook stands out in a positive sense is in its connectivity. You get two USB-C ports supporting data, display, and charging, along with a USB-A 3.0 port for legacy devices and a microSD slot for storage expansion. Of course, there’s the usual 2×2 MU-MIMO 802.11ac Wi-Fi and Bluetooth 4.0 radios, and a 3.5mm combo audio jack.

The Chromebook Plus V2 utilizes a typical island keyboard with black chiclet keys and white lettering. It’s not backlit, which seems to be a theme among Chromebooks — neither the similar keyboard on the Chromebook Pro nor the superior version on the Chromebook x2 are backlit — and it’s also a little cramped. The relatively small keys have a pleasant if soft snappiness to them, but they’re a bit shallow and they do bottom out a tad too quickly.

The Plus V2’s display is in the upper echelon for such an affordable notebook.

The touchpad is functional but a little small. It swipes and multitouches without complaint, which is something we can’t quite say about the touch display. We found that to be a little finicky, sometimes responding to a light tap as if we were pressing and holding, giving us extraneous right-clicks when we least needed them.

The Samsung pen worked well, though. It’s the usual small Samsung affair that slides into a slot on the side of the notebook, and we tended to find it slightly less than natural compared to the larger pens provided by the Pixelbook and the Chromebook x2. It was responsive, however, and it was fine for taking quick screen snippets and jotting down short notes. And it’s included, which is a plus compared to many Windows 2-in-1s like Microsoft’s Surface Pro.

A very good display for the money

The Chromebook Plus V2 has a 12.2-inch IPS display in an unusual 16:10 aspect ratio at 1,920 x 1,200 resolution. It’s just slightly taller than the usual 16:9 Chromebook display, although not as tall as the 3:2 ratio on the Chromebook x2, Chromebook Pro, and Pixelbook. The only difference you’ll likely notice is some minor letterboxing in video.

As far as colors go, the display is clearly in the upper echelon for such an affordable notebook. We can’t test it with our colorimeter, but it appears as colorful and accurate as notebooks that cost twice as much or more. Contrast seems good as well, with black text standing out nicely against a white background.

Our only complaint is with gamma, which seems to be a bit low and thus video is brighter than it should be. The effect isn’t significant, and so Netflix is still enjoyable on the Chromebook Plus V2, but it’s something to keep in mind.

Audio quality is just average, though. The two small speakers on the bottom of the 2-in-1 are good enough for the occasional YouTube video, with decent mids and highs and the usual complete lack of bass. But, you’ll want external speakers or headphones for music or a better movie and TV show experience.

Performance that’s falling behind the curve

Samsung swapped out a slower ARM processor for an Intel Celeron 3965Y in the second version of the Chromebook Plus. If this were a Windows 10 machine, then we’d be thoroughly unimpressed with the exchange, but this is Chrome OS. Google’s lightweight operating system just doesn’t place the same demands as does Microsoft’s more feature-complete version.

Nevertheless, we can’t give the Chromebook Plus V2 very high marks, particularly compared with the Chromebook Pro and Chromebook x2. Both of those notebooks use a much faster Intel Core m3 processor, the Samsung a 6th-gen version and the HP a 7th-gen. In both cases, these slightly premium Chromebooks are significantly faster than the Plus V2.

Whether we’re running a bunch of tabs in Chrome or a few Android apps, the Chromebook Plus V2 feels sluggish in ways that slightly more expensive Chromebooks do not. It’s not actually slow, mind you, it’s just that with too many tabs and apps open, you’ll start noticing some annoying delays that make you want to limit how you use the 2-in-1.

With too many tabs and apps open, you’ll start noticing some delays that make you want to limit how you use the 2-in-1.

If you’re looking for some light gaming, then note that the usual casual Chrome OS and Android games ran well on the Chromebook Plus V2. While the majority of games performed well, the most demanding action games were a bit of a stretch. Asphalt 8, for example, was playable but somewhat choppy at times.

Leave the AC adapter at home

There are 39 watt-hours of battery capacity packed away inside the Chromebook Plus V2’s smaller chassis. That’s not a lot in general, but Chrome OS devices usually get great battery life, and the Celeron processor isn’t all that demanding.

We weren’t that surprised, then, when the Chromebook Plus V2 proved itself to be an all-day performer away from a plug. To begin with, it scored a strong four and a half hours on our most demanding Basemark web benchmark test, right in line with the HP Chromebook x2’s excellent score. Only a handful of notebooks are as good or better.

On our web browsing benchmark, the Chromebook Plus V2 managed around seven and a half hours, a good but not great result that’s around two hours less than the HP. And in our video test that plays an Avengers trailer until the battery runs out, the Plus V2 ran for just under nine hours compared to the Chromebook Pro’s almost 10 hours.

Overall, you’re likely to get through your obligatory eight-hour workday without needing to plug in. Gaming will reduce that score, of course, as will running too many apps that stress the CPU. But if you mostly work in Chrome, then you’ll find the Chromebook Plus V2 to be an all-day productivity machine.

You can spend just $100 more and score Samsung’s own Chromebook Pro. That’s a significantly faster machine with a more productivity form-factor, and that makes it a more viable choice. The same goes for the HP Chromebook x2, which is also faster, longer-lasting, better-built and only $100 more.

The Google Pixelbook is another good option, albeit a more expensive one. It’s a better-looking 360-degree convertible 2-in-1 with class-leading build quality, and it’s in another dimension when it comes to performance.

If you want a Windows 10 machine and hanker for a 2-in-1, then, of course, you have several great options to consider. The Microsoft Surface Pro is just one among many, and you’ll pay for the privilege of a faster and more robust detachable tablet at $800 for a Core m3 processor, 4GB of RAM, and a faster 128GB PCIe solid-state drive (SSD). The $130 Type Cover keyboard and $100 Surface Pen are extra, though, so budget for those as well.

The Chromebook Plus V2 is well made for the money, and will likely last for a few years. It’s a bit behind in the CPU department, though, and it might become too sluggish for comfortable use as Chrome OS continues to progress. The one-year warranty is the industry standard.

No. There’s just no compelling reason to choose the Chromebook Plus V2 over its closest competitors. Do yourself a favor and spend the extra $100 on the Samsung Chromebook Pro or the HP Chromebook x2.