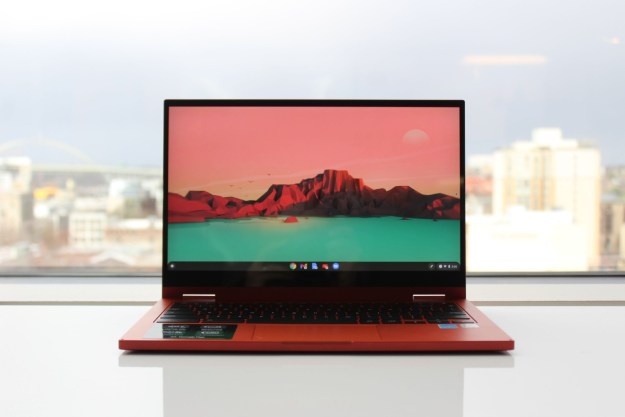 “The Samsung Galaxy Chromebook 2 isn't as fun as the original, but is far more practical.”

Each year, we expect technology to be faster and better than in the previous year. Samsung did the opposite with the Galaxy Chromebook 2.

It has a lower-resolution screen, it’s thicker and heavier, and it doesn’t come with a built-in S Pen slot. It even uses a slower processor. What kind of a sequel is that?

Well, the Galaxy Chromebook 2’s name may be a misnomer, but the device hits a sweet spot for Chromebooks in terms of price at $550. It’s a far more palatable price than the $999 of the original Galaxy Chromebook. But has Samsung sacrificed what made this laptop special to get the price down?

The Samsung Galaxy Chromebook had two unmistakable features: The insane thinness of its profile and the bold red color of the chassis. The color remains, though there’s now a more generic silver option as well.

Its size, unfortunately, has grown. The original was a breathtaking 0.39 inches thick — and just 2.29 pounds. It’s still one of the lightest you can buy. The sequel is a much more conventional 2.71 pounds and 0.55 inches thick. That’s not overly large by any means, but it’s now slightly thicker and heavier than the Pixelbook Go. It’s also in step with the Asus Chromebook Flip C436, another premium Chromebook.

That’s not to say this is a bad-looking laptop in the slightest. The Fiesta Red color is as fun as ever, and the build quality is exceptional. I miss the CNC cut sidewalls, but it’s still one of the prettiest Chromebooks you can buy. That is, before I got my fingerprints over the lid. It’s a bit of a fingerprint magnet.

But overall, I much prefer the sharper angles and edges to the overly round style of the .

One feature of the design that hasn’t changed is the bottom bezel. In the past year, though, we’ve begun to see a shift toward taller screens with slimmer chins, whether that’s 16:10 or 3:2. Even Chromebooks like the Acer Chromebook Spin 713 have moved to the boxy 3:2 aspect ratio, which I’ve come to prefer over the squat 16:9.

This is, of course, because the Galaxy Chromebook 2 has a 360-degree hinge. The heftier size and lack of a built-in stylus limit the usability of the device as a tablet, but that’s unlikely the reason you’re buying a Chromebook anyway.

The color of the keycaps is the most notable change to the keyboard. They’re now black, which is a bit more conventional. And also a bit more boring.

It’s still a delightful keyboard to type on though, so long as you can get familiar with the low travel. The keys are clicky while remaining quiet, and I found myself happily typing along in just a few minutes at my normal speed.

The touchpad isn’t as nice of an experience. It’s spacious, but the surface isn’t as smooth as I’d like, which leads to awkward clicks and drags and finger skips.

The original Samsung Galaxy Chromebook had an OLED screen. That’s practically unheard of for a Chromebook. As gorgeous as it was, its impact on battery life didn’t feel worth the extra pixels. The 1080p QLED screen Samsung has gone with here is a much better choice. Samsung’s patented QLED screen tech has produced great results in like the Galaxy Book Flex.

It’s not as bright as a MacBook Pro or Surface Pro 7, but the Galaxy Chromebook 2’s 13.3-inch screen makes up for it in colors. Images and videos really are colorful but without ever appearing oversaturated. You can thank the quantum-dot tech for that kind of color reproduction, which is rare to find outside of panels.

All of that would make for a great multimedia experience — that is, if these speakers sounded better. They’re pointed down instead of up at your face, with the grills flat against the bottom of the chassis. Most downward-pointing speakers are least built into the raises edges, in order to bounce sound off tables and desks. But these are flat, which causes them to be both muffled and too quiet. If you have them on a pillow or soft surface, they can become nearly silent.

The purpose I assume is to have them pointed at you when in tent mode, but that doesn’t feel like a worthwhile trade-off.

The sound of the speakers would be decent if they hadn’t been located where they are. What a shame! The is still the unabashed winner in audio.

Measuring performance on a Chromebook is tricky. Any Intel Core or AMD Ryzen processor is going to make a laptop like this fly. That held true with the Samsung Galaxy Chromebook 2, which had the Intel Core i3-10110U processor, 8GB of RAM, and a 128GB SSD. This is the more expensive configuration, which costs $699. The starting Celeron-powered configuration is not the one you want, especially since it comes with only 64GB of eMMC storage.

You can’t configure the quite exactly the same, but aside from storage, the is $50 cheaper. I’ll call it a wash in value.

Both use a dual-core processor — the with the 8th-gen Core m3 and the Galaxy Chromebook 2 with the 10th-gen Core i3. Neither are the newest chips that can show up in a Chromebook. Intel announced 11th-gen processors for Chromebooks at CES that feature the improved 10nm architecture and Intel Iris Xe integrated graphics.

When they eventually make it into the first Chromebooks, you can expect a more meaningful jump in gaming performance and creative tasks. The measly Intel UHD integrated graphics here are barely enough to play some of the more intense 3D Android games like Asphalt 9: Legends.

Like working with dozens of tabs open at once? Not a problem.

But despite only having two cores and four threads, the Samsung Galaxy Chromebook 2 feels snappy and responsive. I tested this further using Speedometer 2.0, which measures how fast the system can reload a JavaScript application. With a score of 118 runs per minute, the Galaxy Chromebook 2 won’t slow down any of the web apps or apps you depend on.

Like working with dozens of tabs open, including streaming audio and video all at once? Not a problem. That likely won’t have been true of the Intel Celeron model, which doesn’t have quite the multitasking ability. I ran the Galaxy Chromebook 2 through the version of Geekbench 5, which scored the system 1,003 in single-core and 2,179 in multi-core. The quad-core options in either the or Asus Chromebook Flip C436 will beat it, but it fares well against similarly-priced configurations.

Battery life is arguably the most important test for Chromebooks. It’s often one of their greatest strengths over similarly-priced Windows notebooks. That was a problem from the original Samsung Galaxy Chromebook, and it hasn’t completely been solved in the second generation.

Samsung promises 13 hours of battery life, which isn’t all that ambitious to begin with. The M1 MacBook Pro promises 17 hours of web browsing and 20 hours of video playback.

It does have a 45-watt battery life, which is marginally larger than last year’s. But the results didn’t blow me away. It lasted just under 9 and a half hours in light web browsing and just 13 hours in local video playback. It was a couple hours behind both the . It was neck-and-neck with the Asus Chromebook Flip C436 in video loop, but was an hour behind in web browsing.

Still, the Galaxy Chromebook 2 will last you through the majority of a workday, and ultimately that’ll be enough for most people.

The Galaxy Chromebook 2 isn’t a better laptop than its predecessor. However, it is a better Chromebook. It fits the mold of what people are looking for in a Chromebook, and is finally affordable enough to recommend.

But missing some of the distinctive features of the original, the Galaxy Chromebook 2 ends up much less interesting than it once was. However, the QLED screen is a stand-out, performance is great, and it’s an undeniably attractive design.

Google’s is the main alternative to the Galaxy Chromebook 2. It has longer battery life, a 1080p webcam, better speakers, and is more portable. It’s the better option for most people, and even costs $50 less when similarly configured.

These days, you can expect a Chromebook to last a few more years than a Mac or Windows laptop. The Samsung Galaxy Chromebook 2 comes with a standard one-year warranty.

Yes, especially if you love the design and color of this laptop. I could see someone picking up the $550 base configuration as a light computer for web browsing and the occasional Zoom call. The has better battery life and a few higher-end features, but the Galaxy Chromebook 2 is one of the better Chromebooks to come out in the past year.

Topics
All of Samsung’s videos from today’s Galaxy Unpacked event
The Galaxy Book 3 Ultra is Samsung’s most powerful laptop ever
Samsung Galaxy Book 3 Ultra vs. MacBook Pro 16-inch
Best HP laptop deals: HP Envy, HP Spectre x360, and more
The best PC power supply for 2023
ChatGPT has a new way to detect its own plagiarism
Nvidia may have another monster GPU in the works, and the price could be outrageous
AMD’s Ryzen 9 7950X3D pricing keeps the pressure on Intel
What is ChatGPT Plus? Everything we know about the premium tier
ChatGPT Plus to bring priority access during peak times — at a hefty price
Usually $3,879, this Lenovo laptop is down to $1,479 today
Get this Asus gaming laptop with an RTX 3060 while it’s $400 off
Best 2-in-1 laptop deals: Save on Dell, Lenovo, HP and more