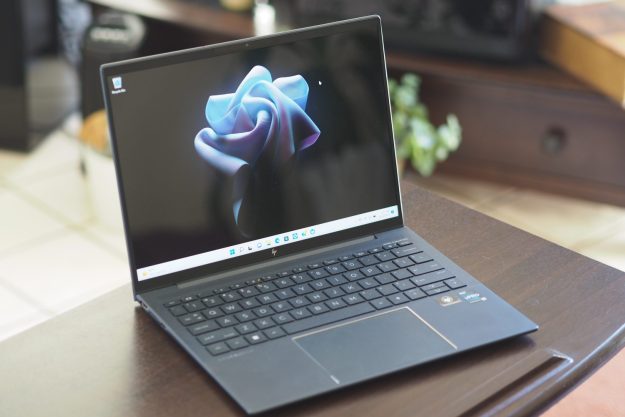 “The HP Elite Dragonfly G3 is fast enough for business users and offers superior battery life, along with an elegant and mostly solid build.”

When it comes to business laptops that don’t feel like business laptops, HP’s Elite Dragonfly laptops lead the way. The usual security measures are in place, but these laptops aren’t afraid to stand out in a crowd.

I reviewed the third generation of the Elite Dragonfly, which has morphed from a convertible 2-in-1 into a traditional clamshell laptop. It’s an incredibly well-designed and attractive little laptop that hits the sweet spot for businesspeople who want to stay classy on the road.

Before a laptop can go off and be extra, it needs to take care of the basics. The Elite Dragonfly G3 does just that, offering an Intel vPro CPU to support enterprise-level security and management features and HP’s Wolf Security suite to protect against malicious attacks in both hardware and software. The Elite Dragonfly G3 matches other business-oriented laptops like Lenovo’s ThinkPad and Dell’s Latitude when it comes to supporting large businesses.

With that basic threshold met, what else do business users want? Well, they want laptops designed for the long haul, given that businesses tend to milk every dime out of their investments — which means holding onto for longer than many consumers hold onto theirs. So, a business laptop needs a solid build, even if it sports a thin and light design.

The Elite Dragonfly G3 is constructed of magnesium and aluminum, giving it both light weight and a mostly sturdy build. There’s a tiny bit of bending in the lid and some flexing in the keyboard deck, but nothing egregious.

The design is also quite comfortable, with rounded edges along the side of the lid and chassis that make for comfortable use, not to mention an elegant look and feel. The design is minimalist but quite attractive, and the chassis is available in either a Slate Blue (my review unit) or a Natural Silver color scheme. The display bezels are lined in plastic, which detracts a little from the premium feel, but they’re small enough to enable a nicely sized machine. The hinge opens with one hand, quite the feat given the light chassis bottom, and it holds the display firmly in place.

Overall, the laptop provides the kind of quality aesthetic and comfortable build that any user would appreciate. The 2.19-pound weight helps considerably, making the Elite Dragonfly G3 one of the lightest laptops we’ve reviewed, and its 0.64-inch thickness makes it an easy laptop to slide into a bag.

Business users will also appreciate the connectivity, which is extensive for such a small laptop. Wireless connectivity meets the latest standards, with optional 5G WWAN support for always-connected internet.

The typical businessperson depends on running applications like Microsoft Office, Slack, Teams, Outlook — often all at the same time. Today’s most common CPUs provide more than enough productivity performance, whether we’re talking about Intel’s 12th-gen Core processors or AMD’s Ryzen 6000 chips. The only exceptions are business users who run demanding scientific, engineering, or creative applications like AutoCAD or Adobe’s Creative Suite — but in those cases, they won’t be choosing thin and light laptops like the Elite Dragonfly G3.

It’s not a machine that’s tuned for high performance, especially since its Core i7-1265U processor runs at only 15 watts. But even similar laptops with the same chip score a bit better in benchmarks. The Dell Latitude 7330 UL is the best example, which outperforms the HP Elite Dragonfly G3 in Geekbench 5 and Handbrake.

With competent if not impressive business performance out of the way, the next question is how long does the Elite Dragonfly G3 last on a single charge of the battery? That’s incredibly important to businesspeople, who are more apt to take their laptops on the road. When flying from one side of the country to the other, you want a laptop that will make it all the way without worrying about whether the airliner provides the power you need.

Here, the HP did much better. In fact, it’s a class-leading laptop when it comes to battery life, demonstrating that HP created a solid compromise between performance and longevity. There are 68 watt-hours of battery capacity tucked away inside the laptop’s diminutive chassis, which is a fair amount for the 13.5-inch 3:2 WUXGA (1,920 x 1,280) low-power IPS display. The Elite Dragonfly G3 makes great use of its battery capacity and lower performance tuning to turn in some impressive battery life scores.

It’ll last just under 12.5 hours in light web browsing and nearly 19 hours in local video playback. For actual work, you’ll get less, but there’s no doubt it will last a full business day of work on a single charge — and then some.

The ThinkPad X1 Yoga Gen 7 is the only of its rivals to come close to competing with it here, and it’s still a couple of hours behind.

HP paid great attention to creating a laptop that is incredibly comfortable to use. That includes the keyboard, which has large keycaps, excellent spacing, and light, snappy switches that make for fatigue-free typing.

It’s one of the better keyboards on a business-class machine. The touchpad is large with plenty of space on the palm rest thanks to the 3:2 display, and its glass surface is smooth and precise with confident yet quiet button clicks. A touch display is optional and not included in my review unit.

HP built in some nifty privacy features, starting with an electronic shutter for the webcam that’scontrolled by a key on the keyboard. There’s also user presence detection, which can lock the laptop and put it to sleep when the user walks away and wake it back up when the user returns. It worked well during my testing and, in fact, I needed to turn off the feature to conduct my battery tests.

Colors were right at the premium average in terms of sRGB and AdobeRGB gamma and accuracy, which results in a display that’s plenty colorful for productivity work and media consumption. Brightness was well above our 300-nit threshold at 398 nits, and contrast was excellent at 1,610:1, smashing through our preferred 1,000:1. While creators want wider colors, business users will find this display quite pleasant.

Two downward-firing and two upward-firing speakers provide a surprising amount of volume for such a small laptop, with clear mids and highs and a touch of bass. The audio system is more than good enough for videoconferencing, augmented by two-way AI-control noise reduction, as well as the occasional Netflix bingeing session.

Speaking of videoconferencing, the webcam is a high-resolution 5MP model with an infrared camera, and HP built in several tools to make for the highest-quality video and the best experience during videoconferencing sessions. There are the usual lighting adjustment and background blur capabilities, along with an Appearance Filter to smooth out the rough edges and Autoframe to allow the user to move around while still remaining centered in the video.

Finally, Windows 11 Hello passwordless login is provided by both facial recognition and a fingerprint reader. Both methods worked quickly and reliably.

The HP Elite Dragonfly G3 is a business laptop masquerading as an elegant, premium consumer laptop. It has everything a business needs and everything a business user wants. It’s not the fastest laptop, but it’s fast enough, and its battery life is stellar. The fact that it’s incredibly thin and light is just icing on the cake.

The ThinkPad X1 Carbon Gen 10 is Lenovo’s own attempt at a more premium business laptop, but it still holds onto the classic ThinkPad DNA. But the HP Dragonfly G3 has better battery life and a more modern design, without the trappings of an older era of business.

The Elite Dragonfly G3 is one of the most elegant and comfortable business laptops you can buy, and it’s the best example of the next generation of business .

Topics
The best cheap printers for 2023
HP Dragonfly Pro vs. Apple MacBook Pro 14: a solid alternative?
The best Dell laptops for 2023
The best laptops for college for 2023
Best Gaming PC Deals: Save on RTX 3070, 3080, 3090 PCs
The 6 biggest problems with ChatGPT right now
Pro users are already unhappy with the upcoming Mac Pro
How to schedule an email in Outlook
15 years later, the MacBook Air could soon have its best year ever
How to watch Super Bowl 2023 on your computer
Microsoft Word vs. Google Docs
Turns out DirectStorage isn’t killing frame rates in Forspoken after all
Best laptop deals: Save on Apple, Dell, HP and Lenovo