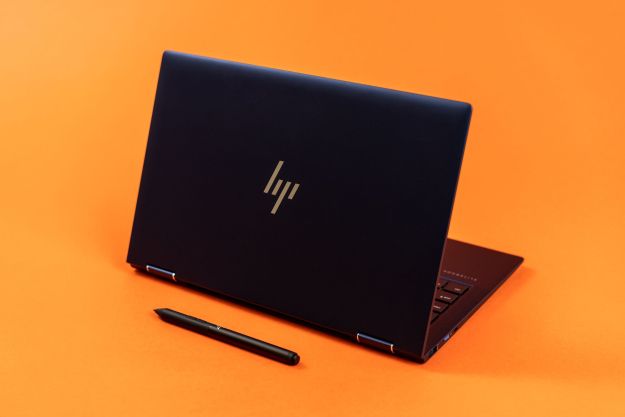 “Lightweight and stylish, the HP Elite Dragonfly is almost too sleek to be considered purely a business laptop.”

This review was updated by Digital Trends writer Mark Coppock on May 6, 2020, with new Tile and Sure View Reflect features.

You hop on your six-hour flight with the ambitious goal of getting some work done. You’re prepared. You have a laptop. A charger. You’re even willing to pay for the expensive in-flight Wi-Fi. It’s time to Get. Work. Done.

Between fussing with the charger below your seat, fighting for elbow room with your fellow passengers, and trying to cram a laptop on an airplane tray, it’s not easy. And if you’re packing a clunky “business laptop,” well, it’s near impossible.

HP thinks its new Elite Dragonfly is the solution. The company claims it has the security features business people need, without the stereotypical design problems. So, is this $2,079 business laptop worthy of first-class travel?

The Dragonfly is designed from the ground-up for taking your work on the go. At 2.2 pounds, it’s significantly lighter than like the XPS 13, HP Spectre x360, and MacBook Air. HP says it cut weight from every element of the laptop to make it this light without losing structural integrity. Even a super-light business laptop like the ThinkPad X1 Yoga is a full 0.8 pounds heavier.

That effort really paid off. Pack it in your backpack or briefcase and you’ll hardly notice the extra weight as you race through the airport attempting to find your gate. It’s a tiny laptop. Yet its bold navy colorway, touches of gold trim, and sharp edges feel made to match your fitted suit and wristwatch. It’s downright decadent.

Holding it one-handed as a tablet is still out of the question due to the size.

When you take your seat and whip out the Dragonfly to do work, it’ll fit well on your tray table. Its overall footprint is quite small, so it might even work in economy class. This is another area the Dragonfly has over its competitors. It matches the XPS 13 in size, but it’s three quarter of an inch smaller than the X1 Yoga in height and width. When you’re in a tight space like a plane, every millimeter counts.

For a better view, you can flip the keyboard around for note-taking or movie-watching. Tablet use is possible but, like other 2-in-1 devices of this size, uncomfortable. It’s just a bit too large and a bit too heavy.

Sitting next to the XPS 13 2-in-1, the Dragonfly’s screen does look a bit dated. The bezels aren’t massive, but they’re a little chunky next to the larger 16:10 screen of the XPS 13 2-in-1. The new Spectre x360 has smaller bezels, too, and I wish they’d made their way over to the Dragonfly. The 1080p screen isn’t as impressive as the high-contrast, insanely bright XPS 13 2-in-1, either. A version will be offered for better image quality, but it’s not currently available.

We also tested HP’s latest privacy screen, Sure View Reflect. It’s the 4th generation of the company’s technology that renders the screen unviewable from an angle — meaning nobody but you can see your display unless they’re standing directly behind you. In “sharing” mode, that is, with Sure View Reflect turned off, the display is very bright and has tons of contrast, as well as accurate color width and accuracy. It’s a good display for productivity users. When in privacy mode, with Sure View Reflect turned on, brightness, contrast, and colors drop off but it works as intended — a copper “coating” is applied to the display, making it illegible from the sides.

The size of the bezels (and size of the keyboard deck) allows for a large-enough touchpad for tracking and gestures. The glass is smooth, and the click mechanism is quiet.

The small footprint, though, does have a compromise in keyboard width. It’s a bit cramped, especially on the function row, which features itty-bitty keys that are easy to accidentally press. HP took it a step further by trying to add a pair of upward-facing speakers right on the keyboard deck.

I’d normally applaud such a choice, but in this case, I would have preferred a larger keyboard like the one on the X1 Yoga. That’s especially true since the speakers here still don’t sound great.

Fortunately, the typing experience is enjoyable. The keypresses have enough travel, (especially compared to the XPS 13 2-in-1 or MacBook Pro), and are quiet enough to not wake up the person sleeping next to you on the plane.

The stylus, which comes bundled in the box, is a lightweight pen that feels great in the hand and recharges over USB-C. With 4,096 levels of sensitivity, it’s perfect for note-taking and illustrating. The only problem is it doesn’t come with a case or any way to attach it to the laptop. You’ll have to rely on your own devices to keep the pen on you, and if you’re on the road, that can be troublesome.

When you arrive at your destination, the Dragonfly has plenty of tricks up its sleeve to keep your computing needs met. Port selection is a good place to start. Despite being just 0.63 inches thick, HP has included both a USB-A and full-size HDMI port. Both aren’t common in this thin, with like the XPS 13 going all-in on USB-C.

The Dragonfly features a USB-C 3.1 and Thunderbolt 3 port for your modern accessories and connections as well, but then gives you options for those legacy ports that still come in handy. They’re key for those moments when you show up at a meeting, frazzled by a day of travel, and need to plug into a TV or monitor through HDMI. It also means you can leave (most) of your dongles at home.

If it’s a short trip (or you’re feeling gutsy), you might dare to leave your charger at home, too. The Dragonfly’s battery life is that good. It lasted just under 10 and a half hours in light web browsing, meaning you’ll get well over a full day of work. Your coast-to-coast flight is covered, whether you’re working or catching up on The Mandalorian. The Sure View Reflect display doesn’t hurt battery life, either.

I was a little annoyed by the power button, which is located right next to the ports on the left side. It leads to a lot of accidental presses when picking up the laptop, or simply moving it. It does make sense when the 2-in-1 is used as a tablet but, as mentioned, the Dragonfly’s size means tablet use isn’t ideal.

In 2020, HP added built-in Tile support, which means users can now locate their laptop using the Tile app. The Tile circuitry is built-in, specifically sliding into the M.2 slot usually used for the optional LTE support — that means it’s Tile or LTE but not both. Tile works well, even when the laptop is turned off — you can at least see where you last connected to the laptop via Bluetooth, and if you’re lucky, someone with the Tile app will be in range and you can see the laptop’s location in real time. It’s a great feature for anyone who’s worried about leaving their laptop behind.

When business features are a hassle

HP is proud of the security features it’s stuffed into the Dragonfly. It has a fingerprint scanner, Windows Hello facial recognition, a physical camera cover, suppressed noise cancellation for Skype calls, extended Wi-Fi range, and three microphones (two front-facing, one “world”-facing). These are all touches that business users will appreciate.

It goes deeper, though. HP Sure Start is also included for a secured boot-up and BIOS protection. HP even sells a separate model with its Sure View darkened screen for privacy while traveling.

This isn’t just software. HP’s own endpoint security controller is located on the board itself. HP says it’s isolated and cryptographically secure. There’s more here than even on a business-first laptop like the ThinkPad X1 .

We all want our computers to be safe, but that’s likely more than what the average person needs. Some the security suite feels like bloatware, especially if you’re keen on using third-party software for malware protection. HP’s security will make IT managers happy, however, and that’s what the company is banking on.

Performance is…ok. The use of Intel’s 8th-gen processors is unfortunate. It’s not HP’s fault, of course. Intel doesn’t support vPro in its newest generations of processors yet, which is (among other things) an important tool for IT departments and remote management.

It’s the same hang-up you’ll find in other business like Dell’s Latitude series or the ThinkPad T-series. Note that the less expensive, $1,629 Intel Core i5 Dragonfly doesn’t have vPro, so you lose the performance bump from newer processors without any of the benefits.

HP decided to play it safe with the Dragonfly. You likely won’t notice a drop in performance compared to the XPS 13 2-in-1 or Spectre x360, especially not with the Dragonfly’s 16GB of RAM, 512GB SSD, and 32GB Intel Optane Memory H10. It hurts the longevity of the laptop, though, and will make you question the high price-tag.

The Dragonfly is a great fit for an on-the-go business person who cares about security, portability, and build quality. The Dragonfly will make that person happy, especially if their employer is footing the bill.

If you’re anyone else, you’ll be wondering why the laptop is so small, doesn’t turn on quickly, or doesn’t have the latest-generation processors. Despite its attempt to impress a broader audience, the Dragonfly’s feature set means it’s still best for a very specific user.

The closest alternative is the ThinkPad X1 Yoga, which is a few hundred dollars cheaper. The Yoga also includes options for a wider range of configurations, including panels and 10th-gen processors. It’s not as portable as the Dragonfly, though.

The Dell Latitude 7400 2-in-1 is also a good alternative with its ultra-thin bezels and plethora of security features. For a similar configuration, the Latitude is $100 more expensive and isn’t quite as small as the Dragonfly.

Non-business options like the HP Spectre x360 or XPS 13 2-in-1 are fantastic, though you’ll be missing a lot of the security features you might need.

The Dragonfly comes with an excellent three-year warranty, which will be attractive to businesses. Barring any accidents, the laptop should last you that long given its hardware and excellent build quality. You can even add on an additional HP CarePack for extended repair and replacement services.

Yes. Those outside the business world shouldn’t cross over, but for the right person, the Dragonfly is the perfect travel companion.

Topics
Best microSD cards in 2023: top picks for your computer, camera, or drone
The best Chromebooks for 2023
Best laptop deals: Save on Apple, Dell, HP and Lenovo
Best Gaming PC Deals: Save on RTX 3070, 3080, 3090 PCs
Wi-Fi not working? Here’s how to fix the most common problems
The best game-streaming services for 2023
Ranking all 12 versions of Windows, from worst to best
If you think PCs are dying, you haven’t been paying attention
What is ChatGPT Pro? Everything we know about its response to capacity issues
I built a couch gaming PC that puts the PS5 to shame — and you can too
AMD Ryzen 7000: availability, pricing, specs, and architecture
ChatGPT: how to use the viral AI chatbot that’s taking the world by storm
Save $600 on Alienware gaming PC with an RTX 3080 Ti today