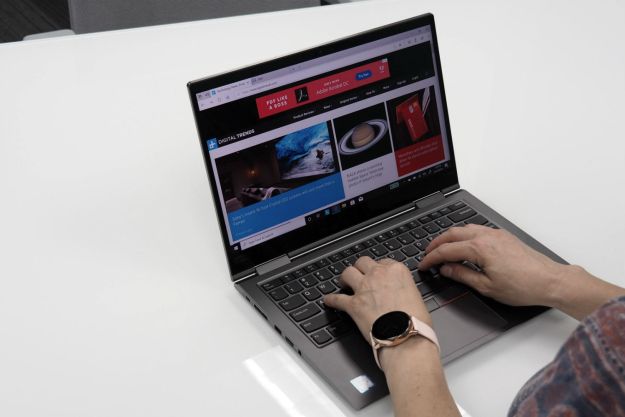 “The ThinkPad X1 Yoga Gen 4 is the ThinkPad you know and love with a dose of cold, hard metal.”

No, your eyes aren’t deceiving you. That svelte, gunmetal gray laptop with the all-aluminum chassis actually is a ThinkPad. Lenovo took a hard turn away from the classic ThinkPad look and feel with the X1 Yoga Gen 4 to appeal to a market that’s wider than the ThinkPad fanbase.

The ThinkPad X1 Yoga has a look that’s unusual for the brand, but does it retain the ThinkPad soul?

That soft touch is gone, replaced by cold, hard metal

The ThinkPad line has for years now maintained a certain easily-recognized design philosophy, especially the X1 models that have used magnesium alloy and carbon fiber in their chassis. This gave them plenty of strength and durability, with only a hint of flexing. The ThinkPad X1 Carbon, for example, had a lid that gave in a bit to flexing under less pressure than I like to see.

The ThinkPad X1 Yoga, on the other hand, feels more solid in hand. The lid is much more rigid, and neither the keyboard deck nor the chassis bottom shows any flexing without unreasonable pressure. This didn’t surprise me — Lenovo’s other all-aluminum laptops are equally rock-solid, with the Yoga C930 being the standard-bearer.

At the same time, I admit to missing the ThinkPad soft-touch feel. The ThinkPad X1 Yoga is harsher and colder, presenting a compromise between build quality and pure comfort.

So, how does it look? Simply put, the ThinkPad X1 Yoga is a conservatively attractive laptop. If you’re looking closely at the lid, you’ll note the ThinkPad logo with the blinking red dot and the X1 logo in the opposite corner, but from a distance, the X1 Yoga won’t be mistaken for one of its siblings. I like the 2-in-1’s design, but admit that it doesn’t give off the same aura as other ThinkPads. Again, the X1 Carbon is a more classic example of the line, and I prefer its aesthetic.

Whether you like the new look and feel or not, one thing is indisputable: The new X1 Yoga is smaller than the last version thanks in part to smaller bezels. It’s over an inch less wide, half an inch less deep, and 0.59 inches thick versus 0.67 inches. The result is a laptop that’s a bit lighter at 2.99 pounds versus 3.08 pounds, despite being constructed of heavier metal.

That doesn’t make the X1 Yoga a great option in tablet mode — nearly three pounds is just too much — but it’s very nice as a clamshell laptop and in media mode for watching movies. And that’s a great experience, which we’ll get to in a bit.

Being thinner does mean the 2-in-1 lost out in the connectivity department. In fact, connectivity mimics the X1 Carbon, with two USB-C 3.1 ports. Along the left-hand side, you’ll find two USB-C ports with Thunderbolt 3 support (and anti-fry protection to guard against bad chargers). One of the ports sits next to an Ethernet and proprietary docking extension (though you’ll need to buy the appropriate dongle, alas). There’s also a USB-A 3.1 Gen 1 port, a full-size HDMI 1.4b port, and an audio jack.

On the right-hand side, there’s a second USB-A 3.1 port, a Kensington lock port, and the slide-out pen slot. Wireless connectivity is provided by an Intel Wireless-AC 9560 chip with 802.11ac Wi-Fi and Bluetooth 5.0. A cellular connection is optional.

The same beautiful display as its cousin

Just like the X1 Carbon, the X1 Yoga has a very nice 14-inch 4K UHD display option — along with the X1 Carbon, a first for ThinkPads with 14-inch displays. Both laptops are clearly using the same panel, with my colorimeter giving similar results across the board. The X1 Yoga’s display is bright at 436 nits and has a wider than average color gamut at 100 percent sRGB and 82 percent AdobeRGB (the typical premium display comes in at 72 percent). The colors aren’t terribly accurate at just 2.59 (1.0 or less is excellent), and contrast is average at 870:1 (1,000:1 is our preferred premium cutoff).

But set all of that aside. Unless you’re a creative professional who demands absolutely accurate colors (in which case, pick up the ThinkPad X1 Extreme), you’ll love this display. That’s especially true if you keep on flipping the X1 Yoga into media mode.

Fire up Netflix and binge away with excellent Dolby Vision HDR400. Just don’t toggle the “Play HDR games and apps” switch in the Display settings or you’ll have a reduced experience overall. Even with that switch toggled off (actually, especially with that switch toggled off), you’ll be able to make out even the darkest scenes in shows like Netflix’s Sabrina the Teenage Witch. That’s my benchmark for how well a laptop can stream HDR, and only an OLED screen like the one on the HP Spectre x360 15 offered a better experience.

Toss in the same audio upgrades as I enjoyed in the X1 Carbon, and the X1 Yoga rounds out as an excellent Netflix binging machine. With four Dolby Atmos speakers, including two tweeters firing up from just beneath the display and two woofers firing down below the chassis, the X1 Yoga pumps out superior sound. It’s more than good enough for casual music, TV, and movies that you won’t feel yourself hankering for a pair of headphones — and that’s true even in media mode, where the speakers are inverted.

The usual ThinkPad input goodness, with some extras

Once again, the X1 Carbon serves as a template for the X1 Yoga. As with the clamshell, Lenovo’s 2-in-1 also suffers from a keyboard with slightly less travel (1.5mm vs 1.8mm) than we’re used to seeing with the excellent ThinkPad keyboard. That’s not a bad thing, given that many thin-and-light laptops have keys with far less travel than 1.5mm, but if you move from an older ThinkPad to the X1 Yoga you’ll notice the difference. It’s still a precise mechanism that touch typists will love, but it’s not quite the same.

The touchpad is a Microsoft Precision version and supports all the Windows 10 gestures, as usual. The red TrackPoint nubbin is right there in the middle of the keyboard where it belongs, with the obligatory buttons that hog a little space from the touchpad. And as a 2-in-1, the X1 Yoga sports a very responsive touch display with the excellent — albeit small — Lenovo active pen that slides into its port to charge.

Windows 10 Hello is well-supported. There’s an infrared camera up top for facial recognition, which is disabled when you use the ThinkShutter to physically cover the webcam. For those occasions, there’s also a fingerprint reader with match-in-sensor technology for extra security. Both methods were reliable for logging in during my testing.

Performance is limited, in what’s looking like a trend

I don’t want this review to turn into a comparison between the X1 Yoga and the X1 Carbon, but there are too many similarities to ignore. Looking at the 2-in-1’s performance, I see very similar results to the clamshell. Specifically, this laptop also benchmarks a bit slower than average.

The X1 Yoga was plenty fast in my testing, but then again other than benchmarking, I don’t push the CPU very often. I used the 2-in-1 in my usual workflow and it was plenty quick. I doubt that the typical user would disagree, and if you use the Windows 10 slider to move to “Best Performance” then there’s a greater uptick in performance than I’m used to seeing. Thermals were well under control, with the fan rarely spinning up and the chassis remaining relatively cool to the touch. If that’s the trade-off Lenovo has made — cool and quiet operation unless you crank up the power — then I support the decision.

Note that the X1 Yoga will gain Intel’s 10th-gen CPUs in a few months, specifically the Comet Lake versions. These should provide a nice increase in processor speed over the 8th-gen CPU in this version, especially the top-end six-core model. With that, the X1 Yoga should be able to churn through demanding tasks like video editing a bit faster.

Oh, by the way. Don’t even bother gaming on this laptop. It’s not worth the trouble, given the Intel UHD 620 integrated graphics. Had Lenovo opted for Intel’s Ice Lake CPU with its enhanced Iris Plus graphics, that might be different, but future buyers will have to live with faster CPU performance instead.

That 4K display is a battery killer

No surprise here. Equip a laptop with a 4K display, and battery life takes a dive. That’s certainly the case with the X1 Yoga, just as it was with — you guessed it — the X1 Carbon. The X1 Yoga also has just a 51 watt-hour battery, which isn’t a lot given the specs. That’s down from 54 watt-hours in the previous version whose highest resolution display option was 1440p.

In our video looping test, the X1 Yoga lasted over seven hours, while it died after six and a half hours in our web browsing test. That means you’ll need your power brick for a full workday, but that’s not horrible for a 4K laptop.

1080p laptops last a lot longer than that. I also tested the low-power Full HD version of the X1 Yoga with a Core i5, and it roughly doubled battery life across the board. If making it through a full working day on a charge is a requirement, you’ll want to consider Full HD instead.

The X1 Yoga is a welcome update to the ThinkPad line, adding a new aesthetic and design philosophy thanks to its all-aluminum construction. It’s fast, feels great in hand, and offers some awesome display options.

Business laptops abound, including some excellent 2-in-1s, giving the X1 Yoga some severe competition. And frankly, I prefer the Dell Latitude 7400 2-in-1 with its more svelte design and equally good build quality. And if you don’t need a 14-inch display, then Dell’s updated XPS 13 2-in-1 is a compelling option.

Check out the best laptops of 2021 for more options.

The X1 Yoga feels plenty robust to last for many years, certainly as long as you’ll want to keep using it. As always, we’d prefer a warranty that stretched longer than a year, especially for a business-class laptop in this price range. The one component that is the slightest bit dated is the CPU, and if that matters, then you’ll want to wait for the refresh to 10th-gen CPUs.

Yes. If you’ve been craving that ThinkPad durability and class without the plasticky body, the ThinkPad X1 Yoga is for you.