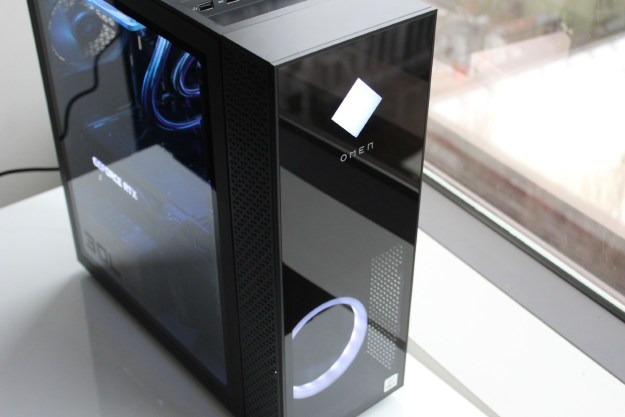 “The HP Omen 30L Gaming Desktop is the most beautiful gaming desktop you can buy.”

Everyone wants to build their own PC these days. The problem? Finding affordable components these days is nearly impossible. More than that, if it’s your first rodeo, putting one together from scratch can be daunting.

HP built its new Omen 30L Gaming Desktop with that exact audience in mind. Using all industry-standard upgrades and a DIY-friendly setup, it’s unlike anything you’ll in an Alienware or ROG desktop.

Did I mention that this thing is absolutely gorgeous? It is. And it’s fairly affordable too, with a starting price of $1,100. Of course, that’s not the configuration anyone should buy. You’ll pay over $2,000 to get a model with the new RTX-30 series graphics, which is the one you want.

If you’re able to snag one, you’re in for a treat.

The aesthetic of the HP Omen 30L is perfectly suited to my tastes. The case is simple and refined, not unlike something from NZXT or Lian-Li. Edges are straight, vents are small, and even the lighting is tasteful. Don’t even bother comparing this to a desktop from ROG or Predator.

Even the branding is minimalist. A simple diamond shape adorns the front, glowing in bright white like some kind of alien obelisk. Call it the mid-century modern of gaming desktop design.

Call it the mid-century modern of gaming desktop design.

Still, HP has included some touches that make this stand out from the standard PC case you can buy off the shelf. The front is made of tempered glass, giving you a view of the RGB-lit fan inside, punctuated by the pattern of triangle-shaped vents along the side. It feels like being at a museum and looking in at an ancient relic. HP charges extra for it, but I love the ultra-reflective look.

The vent design is also found along the top panel, which is made entirely of machined aluminum. Like every other surface of the tower, it feels extremely rigid. On the top, you’ll also find a number of ports, including a headphone/microphone combo jack and two SuperSpeed USB-A ports. I like to see a USB-C port offered here, which options like the Asus ROG Strix GT35 and Falcon NW Talon include.

Despite all the metal and glass, HP managed to keep the system fairly light. It weighs 28 pounds, which is lighter than the 30-pound Lenovo Legion Tower 5i and the 35-pound Falcon NW Talon. The Omen 30L does stand a bit taller, though, thanks to the large rubber feet underneath. HP says this empty space significantly increased airflow coming from below.

The tempered glass is also used for the side panel, which gives you a clear look into your hardware. A string of RGB lights is hung near the top, casting the internals in a gorgeous bath of color. Again, it’s a touch that resembles what many custom PC builders opt for.

The Omen 30L Gaming Desktop uses a custom micro-ATX motherboard, which is typical for this size of tower. The circuit board is even matte black, which is a nice touch. The Falcon NW Talon does use a full-sized ATX board, which gives it some extra features but can make the internal layout feel a bit cramped. The Omen 30L is nice and roomy.

The board allows for one additional M.2 SSDs, as well as two SATA drives in the available storage bays.

The cable management is a little sloppy.

I wouldn’t call it clean, though. The cable management is a bit sloppy, especially if you’re coming from a boutique PC maker like Origin or Falcon NW. They criss-cross in every which direction and would be quite a mess to untangle and reroute. That’s a part of the DIY aesthetic that’s better avoided in a prebuilt system.

Fortunately, access to the internals is completely tool-less. The textured button on the back pops up the side panel. It’s an extremely simple and user-friendly design. I even prefer it to the door hinges that swing open like on the Falcon NW Talon, which can be inconvenient if you keep your tower on your desk.

The other side panel, meanwhile, can be removed with just one screw. That’s also true of the graphics card, which is held in place by a plastic brace to prevent sag and ensure safe delivery. The Omen 30L features plenty of space for cards even as large as the massive Nvidia GeForce RTX 3090.

My review unit was a water-cooled system, though the base model uses a standard air cooler. Either way, HP partnered with Cooler Master for all the thermals, including the front intake and rear exhaust fan. There isn’t much room for additional fans, though HP mentioned there might be room to install a larger radiator up top. The 750-watt power supply is also provided by Cooler Master. Unfortunately, it doesn’t include a manual power-off switch.

Lastly, the RGB memory sticks in my review unit are from HyperX, a company that HP now owns outright. My system had 32GB of Fury DDR4, which is the max amount you can get.

With options ranging from Intel, AMD, and Nvidia, the performance you get will vary. As it turns out, your selection of these processors and GPUs is also a crapshoot. Third-party manufacturers are having an issue with stock as well. HP says eventually an RTX 3060 configuration will also be available.

If you can get a hold of a configuration similar to mine, though, you won’t be disappointed in its performance. It came with an Intel Core i9-10900K, an Nvidia RTX 3080, and a 1TB M.2 SSD.

In 3DMark Time Spy, the Omen 30L fell right in between a couple of its closest rivals. With a score of 16,108, it lands 11% ahead of the Lenovo Legion Tower 5i and 5% behind the Falcon NW Talon. Both systems were also equipped with the RTX 3080. The lead over the Legion Tower 5i was lessened to just 3% in the older DirectX 11 benchmark, Fire Strike.

The RTX 3080 is meant to be a 4K-capable card, so I connect it up to my 4K 144Hz monitor to see what it could handle. It could play every game I tested in 4K at well over 60 fps (frames per second) with max settings, except for Assassin’s Creed Valhalla. That title’s in-game benchmark spit out an average of 52 fps.

It’s the one game where I preferred the 1440p experience, where it averaged a faster 70 fps. It was between 5% (1080p, High) and 15% (4K, Ultra High) behind the Falcon NW Talon at different graphics settings and resolutions, which was a performance disparity the other games I tested too.

At the highest fidelity, the Omen 30L often traded blows with the Talon. But in 1080p, it fell behind the Talon. The clearest example was Civilization VI, which is already a more CPU-dependent game than the others. The Omen 30L averaged 158 fps in 4K at Ultra, but that’s 11% behind the Falcon NW Talon. That lead was extended to 22% at 1080p Medium, showing how much the CPU is bottlenecking the Omen in comparison.

There were occasions when the fan noise was very loud. Like scary loud.

That was also true in Fortnite, where the Omen was faster than the Talon and Legion in 4K (95 fps) but was 10% behind the Talon in 1080p. I’m guessing most gamers won’t be too offended by the disparity, but it’s worth noting if you’re trying to get the absolute fastest frame rates out of your system.

It’s hard to blame the Omen 30L too much, especially since there were games like Battlefield V where it was a much more even fight between the three systems, without deviations more than 5 fps. Regardless, playing the game in 4K at a smooth100 fps feels fantastic, displaying just how game-changing the RTX 3080 really is.

The more serious issue with the Omen 30L was the fan noise. During most games, it wasn’t too bad — but there were the occasions when it was very loud. Like scary loud. During my 3DMark Time Spy, I also noted occasional spikes in CPU temperatures up to 97 degrees Celsius, which is not what you want to see. The system leveled out at around 73 degrees for most of the load, but between the temperature spikes and fan noise, the thermals could have used some more tinkering.

Gaming is the priority for the HP Omen 30L, but there’s no reason you can’t take it for a spin in creative applications, such as Adobe Premiere or Blender. The CPU performance is good, though you’ll obviously get more multi-core juice if you opt for AMD’s Ryzen platform.

The Ryzen 5950X I tested in the Falcon NW Talon, for example, ran circles around the Core i7-10900K in both the PugetBench Premiere Pro and Blender benchmarks. PugetBench tests important tasks like 4K playback and video encoding, and that’s why the multi-core prowess of the Ryzen-powered Talon beat the Omen by 18%.

Still, the HP Omen 30L is a capable creative workstation, especially when you can put that monster GPU to use.

The HP Omen 30L Gaming Desktop is the most beautiful gaming desktop you can buy — hands down. Boutique options like the Falcon NW perform a bit better and come with far tidier cable management. But for the price, the HP Omen 30L is my favorite prebuilt gaming desktop in its category.

The two obvious choices are the Lenovo Legion Tower 5i and the Alienware Aurora R11. The Legion Tower 5i is a good option, though you can’t currently configure it with RTX 30-series cards yet, so forget it.

Both the Alienware Aurora R11 and Asus ROG Strix GT35 are both larger and more performant than the Omen 30L, but they’re also more expensive. And nowhere near as good-looking.

The HP Omen 30L will last as long as you’ll have it. That’s the beauty of desktops that are easily upgradable. Everything can be swapped out, even if you run into technical issues.

HP’s protection plan isn’t great though. It comes with only a standard one-year warranty.

Yes. If you can manage to find one of the higher-end configurations, you won’t find a better prebuilt gaming desktop.

Best HP laptop deals: Get a new laptop for $330
HP unveils new IPS Black monitor with one key new feature
The best all-AMD gaming PCs in 2022
The best gaming desktops
Save $160 on the HP Envy x360 2-in-1 laptop in the HP Day sale
Don’t miss your chance to get this Lenovo gaming laptop for $730
Google Japan’s bizarre new keyboard can also catch (literal) bugs
This new PC case might be the weirdest one I’ve ever seen
This HP Workstation laptop is over $2,300 off (seriously!)
Best MacBook deals and sales for October 2022
More status options coming to Twitter, including ‘don’t @ me’
Edit Tweet feature is finally rolling out to Twitter Blue subscribers
Adobe Free Trial: Try Creative Cloud for free