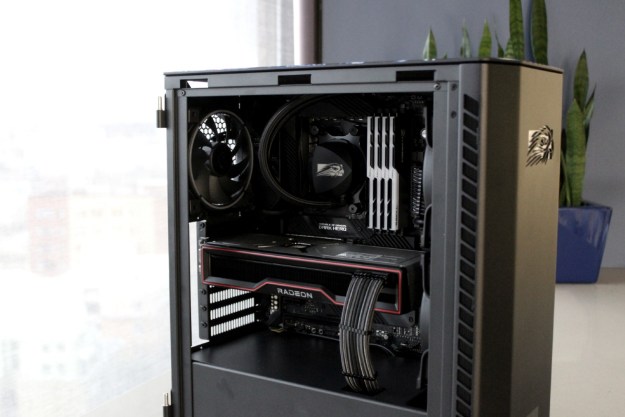 That’s unless you buy it in a blinged-out, premade system like the Falcon Northwest Talon. This PC will cost you many thousands of dollars — my unit costs $5,593 — but let’s not forget that the GPU alone costs $1,000 alone.

But if you can get your hands on something like this, I can say without hesitation that you won’t be disappointed.

The goodness starts with the Talon case, which is the 20th anniversary edition. Falcon Northwest takes a subtle approach to the aesthetic with a plain, matte black exterior featuring simple lines and edges. It’s not gluttonous in its use of lighting, either. The tasteful lighting primarily comes from the components inside, such as the glowing G.Skill TridentZ sticks and ARGB lighted fans.

But as Falcon Northwest would say, the case itself is a mere “blank canvas.” You can get it decked out in a custom paint job like we did, with everything from a simple logo on the glass to full-color artwork or designs sprawled across the top and side panels. The customizations you can make to a boutique gaming PC is what helps brands like Falcon Northwest stand out from the other premade system builders out there.

Beyond the custom artwork, you can opt for the logo to glow in different colors, switch out the aluminum side panels for tinted glass, add different case fans, and so on.

Regardless of what you choose in terms of the finer details, what you get is a supremely well-built and nicely configured gaming PC. The case uses a 4mm layer of aluminum, ensuring there isn’t a hint of flex.

For convenience, the Talon includes some accessible ports on the top panel, including a headphone jack, two USB-A 3.0, and one USB-C 3.1, as well as a glowing power button. It’s a preferred location if you plan to keep your tower on the floor beneath your desk. In the back, the Talon offers a standard array of inputs and outputs provided by the motherboard and graphics card.

For a midsized tower like this, you’ll be impressed by everything Falcon Northwest is able to squeeze in without the setup ever feeling cramped inside. It’s just 17 inches by 9 inches, which will feel compact if you’re coming from a full-sized tower. That does make it a bit larger than the Origin Neuron, for example, which is just 16.3 inches by 6.8 inches. The Neuron is one of the other large system builders that currently support these new AMD processors and GPUs.

But unlike the Neuron, Falcon Northwest’s Talon is a bit more full-featured and future-proofed. It uses the Asus ROG Crosshair VII Dark Hero motherboard, which provides six SATA ports, two M.2 slots, onboard Wi-Fi 6, and two PCIe 4.0 expansion slots, each with 16 lanes. Fitting a full ATX motherboard into a midsized tower can get tricky, but Falcon Northwest pulls it off gloriously. The Origin Neuron, on the other hand, only gives micro-ATX options, which have fewer PCIe lanes and less overclocking potential. It’s a similar story with the Alienware Aurora R11.

That’s not as huge of a deal as you might think — especially since the Neuron also supports up to 128GB of . The advantage of its Micro-ATX board is both a smaller case and a bit more room inside for cooling and tooling around.

Falcon Northwest makes its tight setup work beautifully, though, thanks to some immaculate cable management that simplifies upgrading down the road. The one caveat is the , which requires a separate bracket to hold it in place. You’ll need to remove a number of screws to pop it off, and it’s a bit of a hassle.

But honestly, if you’re laying down serious cash for a desktop like this, you want to make sure you’re pumping it up with the latest componentry from the get-go. And that’s exactly what you can do with the Talon.

It’d be easy to look at the Falcon Northwest Talon as nothing more than a vehicle for the latest AMD parts. That’s fair, considering how quickly these processors and have sold out. You can, of course, also build the Talon around Intel parts with the Z490 chipset. But let’s be real — these AMD components are the hot, new components everyone is talking about.

Ideally, I’d want to compare the Talon against similar configurations of the Origin Neuron and Alienware Aurora R11, both of which can be similarly configured with the Ryzen 9 5950X. The way these different systems build and cool their components will impact performance, though you shouldn’t expect a huge variation in frame rates or rendering times.

Falcon Northwest pairs the CPU with an all-in-one liquid cooling system from Asetek that includes quite a large radiator with a pair of 140mm fans mounted to it. In all my testing, neither the GPU or CPU ever rose above 73 degrees Celsius, and the system stayed surprisingly quiet too.

As you might expect, the Ryzen 9 5950X absolutely dominates in benchmarks. It scored an insane 23,539 in multi-core and 1,537 in single-core. Intel’s measly 10-core chips get stomped in multi-core performance, and the upcoming move to 8 cores in its 11th-gen Rocket Lake-S chips won’t improve the situation.

Again, I haven’t tested this chip in other systems, but as the only 16-core mainstream CPU you can buy, don’t expect another chip to beat it in multi-core scores.

Now, having this much performance won’t have a massive effect on your day-to-day activities. It’s only marginally faster in tasks like word processing, web browsing, and videoconferencing than the latest you can buy.

Content creation is where those 16 cores and 32 threads start to show their potential. It can complete tasks like video encoding lightning fast in applications such as Adobe Premiere Pro and Handbrake, especially if you’re upgrading from an older quad-core or six-core processor. It encoded a movie trailer to H.265 in just 49 seconds — a new record among the systems we’ve tested. To put things in perspective, it also performs 60% better in Premiere than the M1 Mac Mini.

As fast as it is in Premiere, the Radeon RX 6900 XT holds back performance from being the absolute best. Tested in PugetBench, the Nvidia RTX 3080 actually outperforms by 10% the Radeon RX 6900 XT, which was also tested in the Falcon Northwest Talon. That’s not a good look, especially given the $300 price difference between the two.

I also tested the GPU-based rendering of the RX 6900 XT against the RTX 3080 in the Blender benchmark. Here, the two GPUs trade blows on the different tests. It’s not the outright win for AMD it ought to be for the price, but don’t count the Radeon RX 6900 XT out just yet. Gaming is the biggest test for a , and that’s where the RX 6900 XT doesn’t disappoint.

Let’s begin with 3DMark, which starts things out strong for the gaming potential of the AMD-powered Talon. It surpasses the RTX 3080 — again, tested in the same exact rig. But it’s not by much. It’s only 2% faster in the DX12 test, called Time Spy, and 6% faster in the older DX11 test, Fire Strike.

I didn’t have access to the RTX 3090 to test in the system, but a quick look at the benchmarks out there show that the $1,399 card has a healthy lead over the RX 6900 XT. In actual games, though, the RX 6900 XT handles 1440p and resolutions quite well. Just make sure you have a monitor that can handle frame rates this high.

Assassin’s Creed Valhalla is a newer title that can really test the raw graphics performance of a system, and it proved to be a worthy challenge for the Talon. The RX 6900 XT was really impressive here, averaging 69 fps in Ultra High. But in 1440p, the game really shined, hitting 116 fps with graphics quality maxed. It’s not a game you need twitchy frame rates for, but being over 60 fps regardless of the resolution is an achievement.

Civilization VI was the only game I tested where the RTX 3080 beat the RX 6900 XT. In 1080p Medium and 1440p Medium, the RTX 3080 was as much as 7% ahead. But for a game that light, it’s not at all noticeable in those lower resolutions. The game still averaged 184 fps at on Ultra settings. The impressive gaming results spell good things for AMD. In the past, systems with Intel and Nvidia were stronger gaming PCs, but AMD has finally caught up in this regard.

Now, that doesn’t mean I’d necessarily recommend this particular configuration for everyone. Strictly for gaming, the RX 6900 XT clearly outperforms the RTX 3080 — and by a healthy amount in some games. It’s not quite as fast in content creation as Nvidia’s cheaper offering, though. Nor does it offer the same level of capability. That might not be a deal breaker now, but in a few years, it could easily become a must-have feature. That’s especially true since there’s a slight markup on the AMD part, which costs $381 more than the RTX 3080 (rather than $300).

If you’re already spending over $5,000 on a gaming PC, which is where my configuration landed, the extra cost might not phase you. More power to you! But for my money, the RTX 3080 offers a better overall value. That’s also true of both the Alienware Aurora R11 and Origin Neuron, both of which can be similarly configured for upwards of $1,000 less. That’s a lot of cash. The step up in quality and extra features make it worth your money, though, especially if you plan to make use of the extra expansion slots.

If you want a piece of the AMD action, the Falcon Northwest Talon is a great way to dive in. It’s one of the few systems that support these powerful new components, and does it in a highly customizable way. There are cheaper options out there, but the Talon’s immaculate build and tidy setup make it a winner.

Many of my favorite gaming desktops haven’t yet announced support for AMD’s Ryzen 5000 platform, such as the HP Omen 30L Desktop.

The Origin Neuron is the closest competitor to the Falcon Northwest Talon. I haven’t yet tested its performance, but Origin offers a similar configuration in a smaller and cheaper build. The other brand that offers the Ryzen 9 5950X in a gaming PC is Alienware with its Aurora R11. It’s also cheaper, but only offers Nvidia graphics options.

Falcon Northwest also sells its smaller Tiki desktop with up to the Ryzen 9 5950X, though the configuration options are quite limited at the moment.

The Falcon Northwest Talon should last at least five years with its current components, and much longer if you’re willing to upgrade it yourself. That’s the beauty of desktop PCs. The Talon also bundles in an extensive three-year warranty, which covers both parts and labor.

Yes. It’s the perfect vehicle for the amount of power behind these new AMD components.

Topics
Best graphics cards 2023: finding the best GPU for gaming
Best gaming laptop deals: save on Alienware, Asus and more
The best tablets in 2023: which should you buy?
You can buy this LCD mod for one of the best PC cases now
Here’s why people are saying to avoid the entry-level M2 Pro MacBook Pro
The best Chromebook for students for 2023
The best VR headset might be one you’ve never heard of
Why you need to order LG’s 240Hz OLED gaming monitor
2 ways the new MacBook Pro may be worse than the 2021 model
Hackers dug deep in the massive LastPass security breach
HP Dragonfly Pro vs. Apple MacBook Pro 14: a solid alternative?
I can’t believe I’m recommending Forspoken on PS5 over PC
The best ergonomic keyboards for 2023