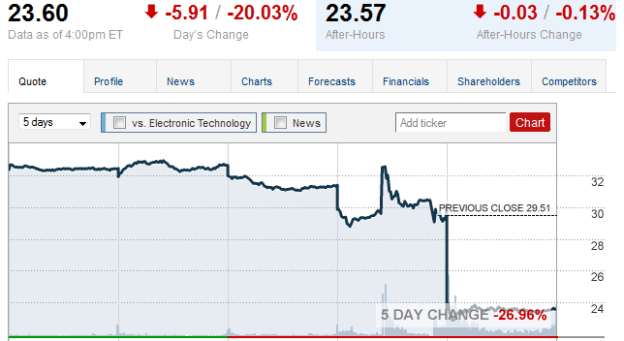 It has been an exciting two days for HP. First it announced it was stopping production of webOS hardware, and then said that it wanted to separate its consumer PC division. Today there was a drastic reaction to the announcements, the company’s stock plummeted 26 percent. At the close of market HP’s stock fell $5.91 down to $23.60.

This is the lowest HP’s stock has been since August 2005, months after Carly Fiorina was ousted as CEO. So clearly investors don’t have much faith in the direction that HP wants to go in the coming years. You can’t blame investors for being worried, when it seems as though HP isn’t even sure of its plans. It is already back pedaling from its webOS announcement, but is it too little too late?

The future of HP is very unclear for the time being, but you can bet we will be keeping a close eye on them. One possible bright spot from all this news is that if HP is planning on being a software company maybe they will keep webOS alive. Just because it isn’t planning on selling any future webOS hardware going forward that does not rule out licensing out the webOS software to others.

Topics
Video-editing app LumaFusion to get a Galaxy Tab S8 launch
This HP Chromebook deal drops the price to under $300 this week
The best places to buy a laptop online in 2023
CES 2023: HP’s Dragonfly Pro Chromebook is the most advanced Chromebook I’ve eve seen
2-in-1 laptop Black Friday deals: Dell, HP and Microsoft from $99
This 8K monitor has 3D tech that can be viewed from all angles
Microsoft continues its unabashed embrace of ChatGPT and AI
Don’t fall for this Mac Mini M1 deal — buy this instead
AMD ‘undershipping’ GPUs signals weak PC market
Best Gaming PC Deals: Save on RTX 3070, 3080, 3090 PCs
Don’t miss this Samsung Galaxy Book 3 Ultra pre-order deal
Experts fear ChatGPT will soon be used in devastating cyberattacks
Lenovo’s Surface-style Chromebook just got a big price cut