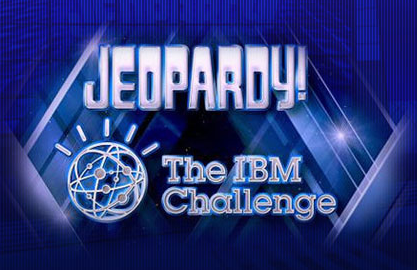 Its may only have been a practice match, but Watson has proven to be a serious competitor to the likes of Jennings and Rutter. Watson is IBM’s Jeopardy-playing supercomputer. And Ken Jennings and Brad Rutter — both Jeopardy champions — served as human competition today during a preliminary Jeopardy match with the machine.

IBM took four years to develop the supercomputer so that it would be capable of mastering the subtleties of the language-based trivia that defines Jeopardy. To get Watson at the Jeopardy-smart level, engineers scanned over 200 million pages of information into its memory.

Watson, named after IBM founder Thomas J. Watson, is made up of 10 racks of IBM Power 750 servers and runs Linux as its operating system. It also has 15 terabytes of RAM, and 2,880 processor cores. That makes Watson able to scan the millions of pages of data stored in its memory in a quick three seconds. Oh, and it won’t fit on a desktop — it’s the size of 10 refrigerators.

Watson is considered to be the next big step forward in artificial intelligence that could soon be applied to areas outside of games. Watson’s creators suggest the machine’s abilities may be useful in the health care industry in the future. In 1997, IBM supercomputer Deep Blue defeated Gary Kasparov in a chess match that ignited the public’s fascination in human-computer competition.

Despite some categories that seemingly only a human could comprehend (“Chicks Dig Me” for one), Watson triumphed in today’s practice round, but not by enough to signal an imminent Watson is ready to lead machines in a world-takeover. Watson finished with a score of $4,400 and Jennings came in second place with $3,400 and Rutter was last with $1,200.

Today’s practice round held in Yorkston Heights, New York set the stage for a series of Jeopardy matches with Watson to be held in February.

In this video, IBM explains why they chose Jeopardy to test its latest supercomputer.

Lambda’s machine learning laptop is a Razer in disguise