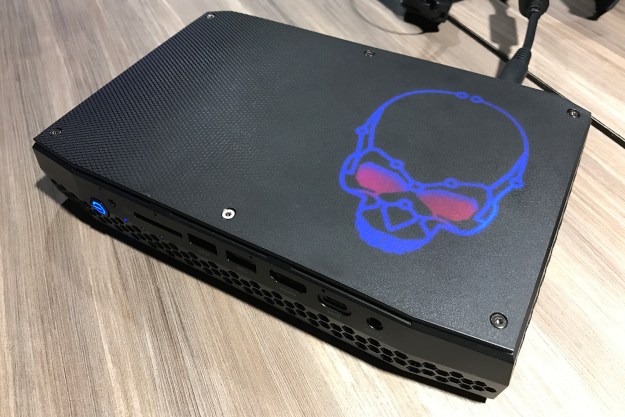 “‘Hades Canyon’ is the most powerful NUC yet, but Intel’s driver support has something to prove.”

At CES 2017, we saw Intel’s first NUC built for gamers. Called Skull Canyon, the NUC combined an Intel quad-core with the company’s most powerful Iris integrated graphics. It was supposed to be a showcase of Iris’ potential – but it didn’t quite work out. Our review found performance left much to be desired, and driver woes meant some games never launched properly.

Intel is back at CES 2018 with another gaming-focused NUC, Hades Canyon. But this year, it’s not using its own integrated graphics, but instead features Intel Core i7-8809G. That’s the most powerful version of Intel’s 8th-gen Core with AMD Radeon RX Vega M graphics, and while we haven’t tested it yet, its specifications look promising. The Vega GPU includes 24 compute units. The Vega 56 graphics card, as its name suggests, has 56 – and it can play some games at 4K resolution. Intel’s own data suggests the i7-8809G will compete well with Nvidia’s GTX 1060. Intel even says Hades Canyon will be able to handle VR. Given its specifications, it may just meet the minimum requirements for most headsets – but even that would be impressive.

That makes Hades Canyon instantly look like a winner. Yes, the size of the system has more than doubled over last year, but it’s still only 1.2 liters. That’s smaller than the Alienware Alpha, or any of Zotac’s pint-sized gaming desktops. Size aside, its has kept a broad, rectangular look that gives plenty of space to cram in ports. A lot of ports. That includes a dual DisplayPort, dual Thunderbolt, and dual Ethernet. Up to six displays can be connected simultaneously, which is an incredible number for such a small system, and twice as much as last year’s Skull Canyon NUC.

Like other NUCs, Hades Canyon supports a surprising amount of customization. Removing six screws lets you lift off the top, providing access to the RAM, two m.2 hard drive slots, the Wi-Fi card, and a few other minor ports. The RAM slots were filled on the unit we saw, but there was room to add a second hard drive. The Intel 8th-gen Core with AMD Radeon RX Vega M graphics is soldered on, of course, so it can’t be replaced, but the system’s upgradability is otherwise much better than you might expect.

And there’s one more cool touch – a light-up skull. The new NUC may not be called Skull Canyon, but Intel has kept the cool skull logo. This time, though, its backlit – which makes it twice as awesome, of course. It also makes the logo customizable. Want to change the color? You can do that? Want to turn it off entirely? You can do that, too. I’m sure some will think it silly, but I think it’s a nice touch that most gamers will enjoy.

On paper, the Hades Canyon NUC sounds good. It has a fast processor, reasonably fast graphics, and gobs of connectivity, all in a small form factor. Yet there’s still reason to be skeptical. Great hardware needs great drivers. While the driver interface will be identical to AMD hardware – only branded as Intel – we’re told driver releases will come from Intel. We’ll just have to wait and see how that goes. AMD releases drivers frequently, of course, and we’d like to see Intel deliver at a similar cadence, but that hasn’t happened in the past.

Intel will need to get serious about drivers if it hopes for Hades Canyon to stand a chance in hell, but the project otherwise looks promising. And if Intel does prove reliable, this NUC could inspire a new wave of small, console-like gaming PCs. That would be a win for everyone.