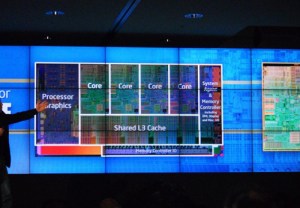 Last week a flaw was discovered in Intel’s new combo CPU/GPU Sandy Bridge processor, a faulty SATA controller, which is where devices like hard drives and optical disc drives plug into the chip. Shipments were halted immediately and several prominent computer and hardware manufacturers, notably Dell, Hewlett-Packard, MSI and Gigabyte, put a hold on all sales of affected products. The flaw, is specific to Intel’s Series 6 chipset, codenamed Cougar Point, is currently being addressed, but the company has now announced that shipments will resume, albeit in a limited capacity.

“Both Intel and its customers are focused on delivering the highest quality PC systems based on Intel 2nd Generation Core Processors,” the company said in a statement. “As a result of these discussions and specific requests from computer makers, Intel is resuming shipments of the Intel 6 Series Chipset for use only in PC system configurations that are not impacted by the design issue.”

To be clear, it seems that Intel will be shipping out the affected chips to PC manufacturers due to the high demand for Sandy Bridge. Systems will only be sold in configurations which are known to be unaffected by the design flaw. SATA ports 0 and 1, which is what a computer’s hard drive and optical drive are typically plugged into, are unaffected and deemed “safe.” Anything with a more elaborate configuration, such as systems with multiple hard drives (including RAID arrays) and/or optical drives, is susceptible. SATA ports can be added with a PCI-Express card, but anyone with plans of installing additional peripherals to their newly purchased desktop computer will probably want to hold off on any Sandy Bridge purchases for now.

Intel has also promised refunds to those caught unaware or affected in some way by the design flaw. The company is also working quickly to address the flaw directly as well, with new, fixed chips already being manufactured, with plans to ship them in mid-February.

Intel Innovation 2022: live coverage of Raptor Lake launch and more
Samsung’s slidable PC display makes foldables seem archaic
Alienware Aurora R15 now comes with Nvidia RTX 4090, Intel 13th-gen
Intel Unison is yet another attempt to make PCs and phones work together
AMD Ryzen 7000: Everything we know about Zen 4 CPUs
Apple’s October event may have been canceled before it began
Developer says it can turn your AMD 6800 XT into an Nvidia 3090 Ti
Best MacBook deals and sales for September 2022
Best gaming chair deals for October 2022
This new Windows 11 feature will help you protect your passwords
HP flash sale: Pavilion x360 2-in-1 laptop just got a $130 price cut
Save $550 on this HP gaming PC with an RTX 3070 today
Hurry — Dell XPS 13 is $550 off in Dell’s monster clearance sale