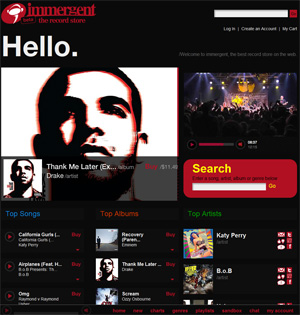 Much of the buzz around digital music is focused on Spotify’s plans for the United States, Rdio’s new subscription service, and what Apple’s anticipated cloud-based music service will look like.

But while streaming music services are capturing the most attention, two other entrants in the digital music market are betting there’s still opportunity in selling digital downloads.

In May, new digital retailer Immergent.com flipped the switch on its public beta, boasting more than 8 million songs from the four majors and independent labels. On June 8, music startup ScatterTunes.com released its latest round of multimedia “V-Album” releases, including editions of Taylor Swift’s “Fearless” and Reba McEntire’s “Keep On Loving You.” ScatterTunes also runs a download store with 3 million songs from all the majors and leading indies.

Back when HMV opened its first two stores in New York in 1990 or when Amoeba Music expanded beyond the Bay Area to Los Angeles in 2001, the major labels welcomed the moves.

Today, you would think labels would applaud the fact that someone is investing in selling music.

However, label executives have been largely indifferent, probably because so far no one has managed to lay a glove on iTunes. Walmart, the largest retailer in the world, is a digital nonentity: Its download store commands a meager 0.17% share of the U.S. market, according to Billboard estimates. Amazon may be making its presence felt in selling digital album downloads, but it hasn’t exactly lit up the scoreboard, so far capturing a market share of 1.4% through its MP3 store.

While the industry had high hopes for both of those digital efforts, Walmart has done zilch in the way of promotion and Amazon’s marketing seems limited to selling digital music alongside CDs and loss-leader sale pricing, apparently hoping that customers shopping for other products will stumble into its MP3 store.

Given that disappointing track record, jaded label executives may wonder how Immergent and ScatterTunes intend to succeed where Walmart and Amazon have fallen short.

Immergent is banking on its social networking functions to distinguish itself with music consumers, such as the ability for registered customers to build playlists that others can purchase. Immergent expects to be cash-flow positive in 18 months and break even in two years, according to Immergent founder/CEO John Trickett, the former head of now-dormant 5.1 Entertainment Group, which included the Immergent, Silverline and Myutopia record labels. The company participated in the major-label consortium that developed the DualDisc format.

Meanwhile, ScatterTunes is striving to distinguish itself by aligning with labels and artists to help promote the site through its V-Album format, which, like the iTunes LP, attempts to bring back the album cover experience of old. For consumers who already have a regular digital copy of a V-Album title, the company also sells “V-Wraps” that contain all the multimedia content included in a V-Album, including lyrics, photos and videos. The company is the brainchild of CEO Witt Stewart, whose music background includes artist management (Carole King, Jerry Jeff Walker, Joe Ely) and co-ownership of Freeflow Productions, which developed and produced Christopher Cross’ debut album, among other releases.

Unlike Apple, which charges artists and labels to construct an iTunes LP, ScatterTunes builds the V-Wrap around an album for free, and within 48 hours, once the necessary materials are provided, according to ScatterTunes COO Christopher Gentile.

While ScatterTunes prices most albums at $9.99, with V-Albums ranging from $9.99 to $19.99 and V-Wraps, when available, sold separately for $2.99. To help promote the release of the V-Album edition of “Fearless,” ScatterTunes has been giving away 100,000 V-Wraps of the album to capitalize on the fact that it had already sold 5.9 million units in the United States, according to Nielsen SoundScan.

V-Wraps contain links to an artist’s website and to other online vendors where customers can purchase merchandise or concert tickets. If the customer leaves the site to buy merch elsewhere, ScatterTunes gets a commission that it splits with labels.

Like iTunes, the ScatterTunes store requires customers to download software to access it. All ScatterTunes downloads are unencrypted, 320 kbps MP3 files and can be imported into iTunes.

“We are not necessarily competing with iTunes but rather being compatible to them with all of the products that we deliver,” Gentile says.

How to sync content from a Mac to an iPhone or iPad
Nvidia’s 40-series GPUs could be seriously delayed — here’s why
TweetDeck (for Mac) is dead. Here are some alternatives
How to use the TV app on a Mac
Lenovo is practically giving away this 2-in-1 laptop today
Lenovo Legion i7 gaming PCs and laptops both got massive discounts
Lenovo’s ThinkVision ultrawide curved monitor is 40% off today
When is the best time to post on Facebook?
The classic Macintosh was just redesigned by AI — and it’s beautiful
How to use clipboard history in Windows
Best gaming monitor deals for October 2022
How to add external games to your Steam library
Nreal’s Air AR glasses head to the U.S., ready to rock with iPhones