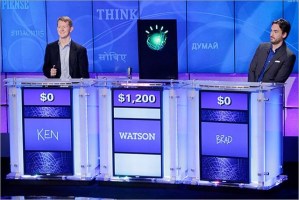 Round two of the Jeopardy! IBM Challenge continued last night as past champions Ken Jennings and Brad Rutter returned to face off against the trivia-spouting supercomputer, Watson. The first round ended with Rutter and Watson tied at $5,000 and Jennings trailing at $2,000. Last night’s showdown played out very differently as the IBM creation pulled far ahead of its meatbag competitors over the course of the episode.

Despite making a few flubs on key questions, a high bid Daily Double and the Final Jeopardy question in particular, Watson ended the second of three rounds with $35,734, more than triple second-place contender Rutter’s $10,400 and miles ahead of Jennings’ $4800. The human competitors are going to have their work cut out for them in the final faceoff tonight, though looking at Watson’s overall performance in round two, this contest is pretty much over.

The supercomputer tripped up a couple of times last night, notably when it bid $6435 on and got the response wrong after misreading the clue. “In May 2010 5 paintings worth $125 million by Braque, Matisse & 3 others left Paris’ museum of this art period,” the clue read. Watson replied “Picasso,” naming one of the three other artists whose paintings were stolen (the other two were Amedeo Modigliani and Fernand Leger) when, of course, the response being sought was the rest of the museum’s name, “Modern Art.”

Twice last night the supercomputer repeated a wrong answer delivered by a quicker-to-the-buzzer competitor. Watson also had trouble in general with the art-related clues. Didn’t Star Trek: The Next Generation‘s android Data struggle with such things as well? Computers and creative thinking clearly do not go well together.

Watson also failed to answer correctly during Final Jeopardy, a clue asking them to name which U.S. city has one airport named after a World War II hero and another named after a World War II battle. “Toronto?????” the computer replied, which isn’t even a U.S. city. It bet only $947 though, which kept the final money tally far ahead of the other two competitors. Tonight’s third and final round will give Jennings and Rutter one last opportunity to gain the upper hand, but for now it’s looking like a victory for the machines of the world.

I took Nvidia’s $20K System Latency challenge, and I was shocked by the results