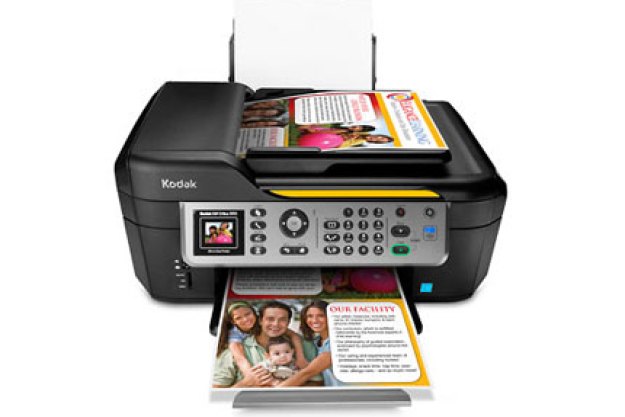 “It seems like Kodak banks on the 2170’s worth because of its cost-saving ink, but it falls a little short on other important functionalities.”

The Kodak 2170 is a home office dream that photo fanatics will love. Considering its features, it’s a compact machine that boasts productivity as well as a creative side. While it stops short of fulfilling your every corporate need and might seem a tad pricey at $149.99, the technology behind the 2170 will make it a staple for many small businesses and general households.

Right out of the box, the 2170’s most impressive element is the ability to print easily from your iOS or BlackBerry devices. All you have to do is download Kodak’s free app, pull from your photo library, and send the image via Wi-Fi to the printer (if you have a Kodak digital frame, you can also send it here). The only drawback is the absence of an Android app, although Kodak hasn’t ruled out developing one. The 1.5-inch, color LCD display makes it easy to connect to the network and determine format. The printer obviously includes a SD card slot and USB port for printing purposes as well.

Kodak also outfits the 2170 with a slew of productivity features: It comes with a 150-sheet paper tray, impressive for its comparably compact size and a paper sensor that auto-adjusts and aligns based on paper type. The 2170 seems primarily like a photo printer with its various image-friendly features, but Kodak doesn’t skimp on text needs: Its Perfect Page technology corrects tough-to-scan text (think yellow paper, pencil, etc).

But back to those photo features. Kodak jumps on board with the 3D trend, including a very unique take on the technology. With a pair of classic 3D glasses (yes, those blue-and-red paper ones) and the included software, you can forgo buying a 3D camera and create your own images. We got a quick look at this feature at CES, and at first glance thought it to be a little gimmicky, but Kodak says that amount of interest was huge. Still, we’re not entirely certain how many people would take advantage of the software just to momentarily look at their 3D picture. And remember that you can’t just randomly pull favorite photos and make them 3D: You have to take an image, and then move three inches and take it again. Luckily Kodak doesn’t bank on the feature as its big draw, nor does it skimp on the more important elements, so it doesn’t take away from the 2170 in general. Currently the 3D glasses are not included with the printer but Kodak told us they will be starting this fall.

The included software comes packed with more photo possibilities, like the ability to print stills from video files and auto-share options for various social networking sites. We wish these features were built-in to the printer but that would obviously increase the price and require a much larger, more capable LCD screen.

Kodak uses permanent, higher quality printheads, rather than disposable printheads used in many budget competitors. While this means you have to pony up more to start with, the lower cost of ink over the life of the product should more than offset the initial expense. In our perspective, saving money over the long term and decreasing the annoyance of changing cartridges is worth it.

For instance, Kodak’s basic 30 black ink cartridge retails for $9.99 and delivers 335 pages. HP’s basic 901 black ink cartridge goes for $14.99, and it’s only good for 200 pages. Quality Logic crunched the numbers on ink costs (at Kodak’s request) for its Cost of Ink Per Page Analysis report, and confirmed Kodak’s 10 series ink turned out to be a money saver compared to competitors. Say you print six black and white documents, four color, and two photos a week. Over the course of that week, Kodak 10 series ink costs 69 cents; here are a few competitor printers’ results:

This obviously adds up over time. Of course, these models (with the exception of the Pixma MX350, which is priced the same) all cost less up front, so if you find yourself using the machine for scanning and faxing and only occasionally printing, long-term ink costs probably aren’t your primary concern. [For a more in-depth look at how these printers line up on features, we’ve included a chart.]

Our own print tests for photos and text yielded quality results. Photos looked natural and vibrant and text was perfectly contrasted and easy to read. Even after pages upon pages of printing, results remained high. In terms of speed, its color photo printing is up to par, but its black-and-white document speed only admirable – don’t get us wrong, 20 pages per minute isn’t painstakingly slow, but don’t plan on being blown away by its speed. Many printers can compare or outdo it in this department.

The 2170’s LCD controls are extremely intuitive and if anything have a shallow learning curve. You have designated buttons for its four major functions and use the control dial to shift through options on the LCD display. Two start buttons, one for B&W and one for color printing, keep you from working entirely within the display or your computer – it’s a nice, tangible way to print. After first taking the 2170 out of the box, we wanted to set up the wireless and use the Pic Flick app, which was surprisingly quick and easy to do. After connecting to the same Wi-Fi network via iPhone and printer (you just use the arrow to scroll to your connection options, find the network, and type in the password), we sent a photo to the printer from the app and watched it spit out our photo.

We weren’t as impressed with Kodak’s scanning technology as we hoped to be, although it easily outdoes the average machine. Kodak’s Perfect Page software means you can scan those impossible-to-recreate documents (think yellow paper, wrinkled pages, text written in pencil) and the scanner will right those wrongs. While the 2170 stood up to our highlighter and pencil tests, our wrinkled page didn’t fair so well – the scanned version was definitely harder to decipher than the original. That said, the original had been put through the ringer, and we wouldn’t expect many devices to be able to fix it.

The 2170 is a quality four-in-one machine. If you’re in the market for just a printer, though, you’ll be easily overwhelmed with the options you aren’t using as well as paying far too much. It seems like Kodak banks on the 2170’s worth because of its cost-saving ink, but it falls a little short on other important functionalities, like document print speed. But otherwise, you can stioll get all of your home office needs taken care of with this device, and superior photo printing quality, which was easily one of the most impressive elements of the printer. The Pic Flick app and wireless functionality also make a good argument for the 2170.

Topics
The best Chromebooks for 2023
Best laptop deals: Save on Apple, Dell, HP and Lenovo
Microsoft Word vs. Google Docs
Best Gaming PC Deals: Save on RTX 3070, 3080, 3090 PCs
The 6 biggest problems with ChatGPT right now
Pro users are already unhappy with the upcoming Mac Pro
How to schedule an email in Outlook
15 years later, the MacBook Air could soon have its best year ever
How to watch Super Bowl 2023 on your computer
Turns out DirectStorage isn’t killing frame rates in Forspoken after all
Wi-Fi not working? Here’s how to fix the most common problems
Best microSD cards in 2023: top picks for your computer, camera, or drone
The best game-streaming services for 2023