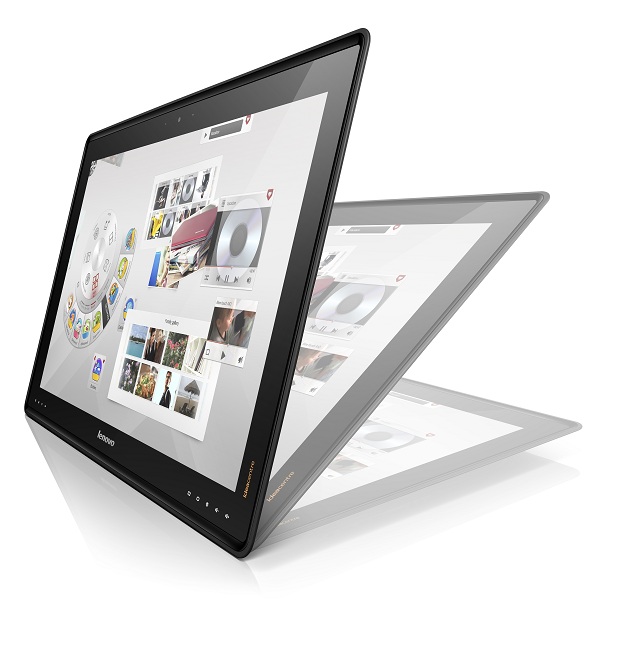 Check out our review of the Lenovo IdeaCentre Horizon all-in-one table PC.

Lenovo unveiled quite a few new products today at CES, but none are quite like the IdeaCentre Horizon. With its gorgeously massive touchscreen, the table PC aims to create a new digital experience: the sharable home computer. The 1920 x 1080 HD 27-inch screen is a backlit beauty. It accepts 10-finger multitouch gestures, allowing multiple users to gather around the screen and interact simultaneously.

When vertical, the IdeaCentre Horizon could serve as a good-sized flat-screen TV. Mounted on an adjustable rolling stand, it can easily transform from a 90-degree “wall” mount to lying completely flat, as well as any angle in between. At 1.06-inch thick and only 17 pounds, the screen is easy to maneuver, and visible from nearly any angle.

Of course, the touchscreen would hardly be as impressive without the hardware to back it up, including up to a 1TB hard drive, up to Windows 8 Pro, up to NVIDIA GeForce GT 620M graphics, and up to a 3rd generation Intel Core i7 processor. Additionally, its internal battery lasts up to two hours for toting it around the house.

Paired with included peripherals such as “e-dice” and four joysticks, the IdeaCentre Horizon becomes a gaming powerhouse, as well as the pinnacle of the “phygital” – a neologism Lenovo invented to describe the intersection of digital and physical gaming. Games designed specifically for the multi-user, multitouch screen come from the Lenovo App Shop, while pre-loaded apps include Monopoly, racing games, and music editing.

Moreover, when tilted horizontal so that it lies completely flat, the IdeaCentre Horizon defaults to a home screen with a “moon dial” for a full desktop experience. This scrollable pinwheel of applications is designed for multi-user interactions, multi-tasking, and unique touch gestures.

The IdeaCentre Horizon starts at $1,699, and is slated for release early this summer. Lenovo also demonstrated the IdeaCentre Horizon’s big brother at CES, a massive 39-inch behemoth nicknamed “Gamma,” but this couch-sized screen is only an early concept for now.

The best Intel processors for 2022
Best Dell XPS deals: Save on XPS 13, XPS 15 and XPS 17
Best laptop deals: Save on Apple, Dell, HP and Lenovo
Best Chromebook deals: Get a new laptop from $99
Best MacBook deals: Save on MacBook Air and MacBook Pro
This 15-inch Dell laptop is just $250 today, but it’s selling fast
All the products that Apple didn’t announce in 2022
Nvidia may be shooting itself in the foot with its new monster GPU
This killer Black Friday deal on an RTX 3060 gaming laptop is still available
The most innovative laptops of 2022
How to create a calendar in Google Sheets
Discord now lets creators make money, and it’s not with crypto
Acer Swift Edge vs. Microsoft Surface Laptop 5