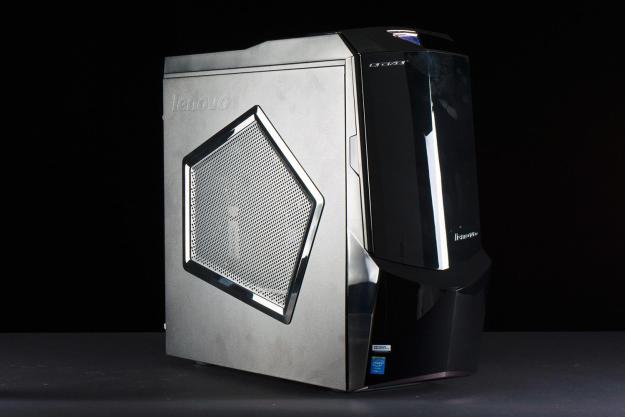 “The Erazer X510 is a half-hearted attempt to dazzle gamers with a rig that has impressive specs, but no real substance.”

Lenovo isn’t slowing its march on the PC gaming space. While not traditionally known as a brand that gamers flock to, several of the company’s recent notebooks have proven to be very capable. Even entry-level models sometimes ship with Nvidia graphics.

Lenovo’s thrust into PC gaming is not limited to laptops though. The company also has gaming desktops in its sights, and the company’s latest attempt to invade that space comes in the form of the Erazer X510 mid-tower PC.

Lenovo has resisted the urge to adorn its gaming PC with more LEDs than a Christmas tree.

We get why Lenovo is trying to get in on PC gaming systems. Gamers are the only buyers outside of the enterprise world that are willing to spend big bucks on serious hardware. Yet, companies like Lenovo have always struggled to understand what gamers want. Only Dell has been successful, and that’s only because it purchased Alienware, a boutique gaming PC builder that already had a sterling reputation among gamers.

In short, Lenovo is in for a fight, and one peek at the Erazer’s specs tell us that this might be a misfire on their part. Our review unit arrived with an Intel Core i7-4770K CPU, which is excellent given this rig’s typical price of about $1,300.

However, it also came with an Nvidia GTX 760 graphics card. That’s not bad, but it’s not amazing either, and some competitors offer more graphics horsepower for less.

So, can the X510 pass muster? Or does it get bested by the competition?

The Erazer, an odd combination of “eraser” and “razer,” evokes thoughts of sharp metal, and a mid-90s Arnold Schwarzenegger flick. This also describes the case itself, which consists of hard edges, and a stealthy shade of black paint. Lenovo has resisted the urge to adorn its gaming PC with more LEDs than a Christmas tree, and maintains a subtle aesthetic as a result.

Aesthetically, the case is a mundane mid-tower chassis covered in gaudy, glossy plastic along its front and top. This results in a strange two-tone appearance.

However, it’s clear that there was some thought put into the case’s design. For instance, opening the front door reveals a hot-swappable hard drive bay, as well as the front-based ports. The latter are hidden behind a small panel on the forward edge. Here, you’ll find two USB 3.0 ports, a card reader, and audio jacks. The case even includes a built-in handle, which is nice considering that the the Erazer X510 is small enough to take to LAN parties.

Around back, you’ll find six more USB ports, two of which are 3.0, along with 2x DVI, HDMI, DisplayPort, and 5.1 audio with S/PDIF. This is a mediocre array of ports, but this should be sufficient for most gamers.

Inside the system, you’ll find the innards of a standard consumer-oriented mid-tower desktop. Everything is exactly where you’d expect it to be, and there’s nothing about the interior that’s unique or innovative.

This is a tradeoff. A standard interior like this makes servicing and upgrading the Erazer simple for both veteran and newbie enthusiasts alike. Aside from a chassis reinforcement bar that extends across the lower half the exterior (which is easily removed by taking out two screws), everything you may have learned from previous DIY computing projects applies here.

Yet, there’s also nothing here that makes your job easier, or aids the X510’s upgrade-ability. The hard drive bays are tool-less, but the plastic used in them is cheap, and feels like they could break at any moment. There’s a fair amount of space for a long video card, but the chassis reinforcement might get in the way of cards that are particularly thick. Plus, the two cooling mounts are built for 80mm fans instead of the more popular 120mm size. This limits upgrade options, and takes most liquid CPU coolers out of the equation.

Just one of these flaws would be excusable, but together, they reinforce our belief that the X510 is just a re-purposed home PC rather than a rig built for gaming from the ground up. Buyers hoping to improve performance with upgrades down the line may be disappointed by the limitations posed by the Erazer’s chassis.

Our review unit arrived with a Intel Core i7-4770K quad-core processor, 16GB of DDR3 RAM, and an Nvidia GTX 760 video card. Lenovo also includes a one-touch overclocking button which is designed to improve performance with minimal effort. To test it, we ran all of our processor benchmarks with this feature off, and then again with it on, starting with SiSoft’s arithmetic test.

In this test, the Erazer stands up well compared to affordable boutique rigs from Digital Storm and Maingear, both of which turned in much lower scores. According to the test results, overclocking a notable boost in this benchmark.

That’s right; turning the feature on reduced performance. Even so, Lenovo’s rig beats the Digital Storm Vanquish II’s score of 15,841, and the Maingear Vybe’s score of 19,902. The overclocking feature also performed poorly in Geekbench, where we received a multi-core score of 13,124 with it off, but a lower score of 12,709 with it on. Yet, multiple test runs confirmed that SiSoft’s arithmetic test is quicker with overclocking on. The SiSoft test is not as dependent on multiple threads, so what this data tells us is that Lenovo’s one-touch overclock works well if a program doesn’t fully load all cores, but works poorly if all cores experience significant load.

HDTune, our hard drive benchmark, recorded an average read speed of 147 megabytes per second (MBps) from the Erazer’s 2TB hard drive. Access times averaged out to 14.7 milliseconds (ms). Both results are modest, but respectable for a desktop with a massive mechanical drive instead of a quicker (and smaller) solid state unit.

All of this talk about the processor and hard drive is important, but what about the graphics card? Can this system’s Nvidia GTX 760 keep up with the competition? Have a look at our 3DMark scores for yourself.

Both the Vanquish II and the Vybe, while far behind in processor benchmarks, catch up to the Erazer in graphics performance. Lenovo has made the classic mistake of going hog wild on the processor and RAM, while paying too little attention to the video card. The Lenovo Erazer X510’s Core i7-4770K CPU looks nice on a specs sheet, but it can’t run games quickly on its own.

The X510’s 3DMark scores don’t look good for the Erazer, but that doesn’t necessarily mean it’ll do poorly in real-world gaming.

To gauge how this Lenovo handles actual games, we loaded our usual test suite of Total War: Rome II, Battlefield 4, and League of Legends. All games were tested at 1080p resolution.

That’s not bad, but it barely beats the less expensive Digital Storm Vanquish II, and comes in well behind the Maingear Vybe. The latter got an impressive 74 FPS at maximum detail. Granted, the Vybe is more expensive, but the Erazer’s merely decent scores in a game that favors its configuration doesn’t bode well for Battlefield 4.

Even the less expensive Vanquish II is quicker, hitting an average of 67 FPS at Ultra, and the Vybe blows the Erazer away with its average of 81 FPS at Ultra. Battlefield 4 is absolutely enjoyable on this rig even at Ultra detail, but these results aren’t great given the Lenovo X510’s price.

This actually bests the Vanquish II, which averaged only 147 FPS at Very High, but is behind the Vybe, which hit 213 FPS at the same setting. That said, any of these systems can handle League of Legends with plenty of grunt to spare.

A keyboard that wows

Bundled peripherals are a tricky subject in the gaming world. Most companies don’t offer them because it’s difficult to offer a decent keyboard and mouse as part of the package without inflating the price, and most gamers already have a pair of peripherals they enjoy using.

The Erazer’s bundled mouse and keyboard are both excellent, and may make you ditch your current gear. The large gaming keyboard offers plenty of space, solid key feel, back-lighting, and a comfortable palm-rest. No, it’s not mechanical, but it’s still great for games.

The mouse, which uses a laser sensor, is even better. It offers a total of six buttons, subtle LED lighting, and a scroll wheel with good grip that’s great for switching between weapons in first-person shooters. Lenovo even includes weights that can be used to adjust the heft of the mouse to your liking.

We thought the Erazer’s small fans might spin quickly enough to generate sufficient cooling, but in truth, the hardware inside this system isn’t exotic enough to justify the effort. The fans spin lazily at idle, generating only 40.9 decibels of noise. That increases to only 46dB at full load, which makes this the quietest gaming PC we’ve reviewed since the Falcon Northwest Talon.

Power draw is modest too, measuring 51.7 watts at idle, and no more than 246 watts at load. Our tests of the overclocking feature reveal it can add up to 20 watts of draw in a processor-dependent workload, but adds no more than three watts in games, and zero additional draw at idle.

The X510 comes with Lenovo’s stand one year warranty against manufacturer defects. Shipping is included for the life of the warranty, which is better than what some small builders manage. However, Lenovo does not offer extras like lifetime support, or no labor cost upgrades. Competitors also at times provide a two year or three year warranty as a special offer.

The Lenovo Erazer X510 is a perfect example of why major brands rarely attract gamers, even when they offer affordable, well-equipped rigs. Rather than building a unique product from the ground up, the company re-used the bones of its affordable home PCs, amped up the hardware, and called it a day. That just doesn’t cut it.

Gamers are some of the most well informed PC shoppers you’ll come across. Most know that gobs of RAM won’t improve games, that upgrade-ability is important, and that the video card should be the star of the show. Lenovo’s X510 falls short.

Is the Erazer a decent value? Depending on the price it’s sold at – and the price seems to vary a lot – maybe. Our review unit currently goes for around $1,300, which is several hundred more than the Vanquish II, and several hundred less than the Maingear Vybe in the configurations we tested. Though it’s not a clear bargain, the X510 is adequately quick for the price, and scores particularly well in CPU benchmarks.

Yet, niche brands are a better choice. Companies like Digital Storm and Maingear offer less RAM, and slower processors for the price. That’s only because they put your money into all of the components that matter. Gamers buy gaming computers to play games, and in that critical arena, the X510 falters.

Hackers could use this nasty bug to expose government websites