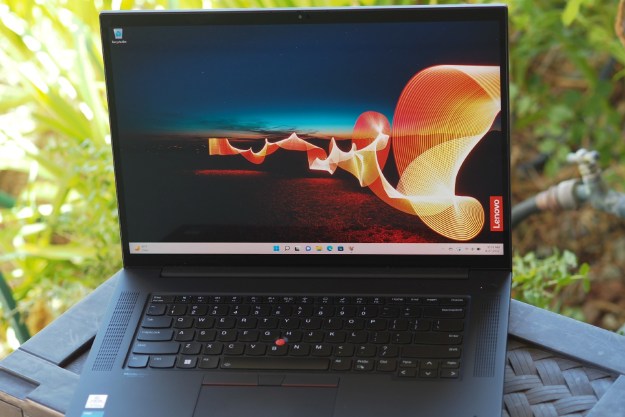 “The Lenovo ThinkPad X1 Extreme Gen 5 is seriously fast, even if the design is a bit old-school.”

The ThinkPad X1 Extreme is the real workhorse of the line. Now in its fifth generation, it comes packing Intel 12th-gen H-series CPUs with vPro and ultrafast discrete GPUs up to the Nvidia RTX 3080 Ti.

The ThinkPad X1 Extreme Gen 5 is certainly a fast laptop, even if its overall design is getting a bit long in the tooth. If you enjoy that traditional ThinkPad aesthetic and build, but also need that extra performance, the X1 Extreme Gen 5 will satisfy.

Clearly, this is an expensive laptop. But it’s not more expensive than many other powerful 16-inch laptops like the MSI Creator Z16P and the MacBook Pro 16, which can cost even more.

As mentioned in the introduction, the ThinkPad X1 Extreme is all about providing the best performance among mainstream ThinkPad laptops. The fifth-generation model upgrades to 45-watt Intel 12th-gen CPUs, DDR5 RAM, and PCIe 4.0 SSDs.

All of that should result in a meaningful upgrade from the previous generation. I reviewed a configuration with a 14-core/16-thread 45-watt Intel Core i7-12800H, which is a fast CPU that supports Intel vPro technology to plug into corporate environments. The laptop also included the discrete Nvidia GeForce RTX 3070 Ti, a fast GPU for both gaming and creative tasks.

Lenovo throttles the GPU in balanced mode and unleashes it in performance mode.

I used Lenovo’s thermal management utility to test in both balanced and performance modes. Interestingly, the utility made little difference in our CPU-intensive benchmarks, with the ThinkPad X1 Extreme Gen 5 still performing well compared to several similar laptops.

However, when I ran the Pugetbench Premiere Pro benchmark that uses a live version of Adobe Premiere, the ThinkPad was slow in balanced mode. It came in second slowest behind the MSI Creator Z16P. When I switched to performance mode, however, the ThinkPad’s Pugetbench score jumped to 928, among the leaders we’ve tested. That indicates that Lenovo throttles the GPU in balanced mode and unleashes it in performance mode.

The bottom line is that if you want to get the best performance in GPU-intensive applications like Adobe’s Creative Suite, you’ll want to crank up to performance mode. You’ll deal with more fan noise, but it’s more than worth the uptick in performance. When switched into performance mode, the ThinkPad X1 Extreme Gen 5 is a seriously fast productivity machine and a legitimate creator workstation.

It even competes with the vaunted M1 Pro MacBook Pro 16, and when configured with the Core i9-12900H and RTX 3080 Ti GPU, would likely keep up with the M1 Max MacBook as well. It’s worth noting, though, that the much less expensive HP Envy 16 with the RTX 3060 also performed well in this benchmark.

As we saw in the mainstream benchmarks above, Lenovo clearly tuned its thermal utility to dramatically increase GPU performance. This showed up in our gaming benchmarks as well, and interestingly, in balanced mode, the ThinkPad X1 Extreme Gen 5 was locked at around 30 frames per second (fps) across all our games. Note that it wouldn’t run Fortnite, crashing when I tried to enter combat. Its graphics drivers were up to date and so it must be something that Lenovo is doing with the firmware.

In performance mode, though, the ThinkPad performed much better. It still wasn’t the fastest gaming laptop in our comparison group, performing similarly to some laptops with the slower RTX 3060 GPU in all but Assassin’s Creed Valhalla. But it was fast enough to run modern titles at 1440p and high graphics. Note that the laptop can be equipped with a 165Hz WQXGA display for tear-free gaming.

With so much performance packed inside, I wasn’t surprised to see limited battery life. The ThinkPad X1 Extreme Gen 5 has a 90 watt-hour battery, which is fine for a large laptop, but there’s also a high-resolution display and powerful components.

The laptop hit seven hours in our web-browsing test, close to 11.5 hours in our local video test, and about six hours in the PCMark 10 Applications battery benchmark. Those are good enough scores given the design, but you’ll need to carry the very hefty power brick with you for all-day sessions.

The only distinction is an optional carbon-fiber weave on the lid that comes with the highest-end display. It’s constructed of aluminum in the bottom chassis and carbon fiber in the lid, with a soft-touch coating on the outside. For such a large, bold laptop, the ThinkPad X1 Extreme Gen 5 is surprisingly inviting. if a bit old school.

And it is, indeed, a large laptop. Its top and bottom bezels aren’t particularly small, making it quite a bit deeper than some other 15-inch or so laptops. The Dell XPS 15, for example, is smaller. The ThinkPad is also rather thick at 0.78 inches, compared to the XPS 15’s 0.73 inches, but it’s also lighter than the Dell at 4.1 pounds versus 4.62 pounds thanks to its lightweight materials. As far as large-screen non-workstation laptops go, the ThinkPad X1 Extreme Gen 5 isn’t a particularly tiny example. But that’s the price you pay to carry around so much power.

The keyboard is distinctly ThinkPad-like.

You have to try really hard to bend the lid, and the keyboard deck and chassis bottom are completely rigid. That gives the ThinkPad X1 Extreme a feeling of solidity that’s in line with its high price. The hinge opens with one hand and holds the lid firmly in place. The MacBook Pro 16 might be a slightly better-built laptop, but then again, it’s in a class of its own.

The keyboard is also distinctly ThinkPad-like, at least in the sculpted keycaps and keyboard layout (complete with the inverted left Fn and Ctrl keys). It’s lighter and snappier than usual, though, which I much prefer. That makes it one of the best keyboards on a Windows laptop, different than but equally as good as that on the Dell XPS 15. Only the MacBook Pro 16’s Magic Keyboard is better.

As usual, the ThinkPad X1 Extreme Gen 5’s touchpad is smaller than it could be due to a set of buttons accommodating the TrackPoint nubbin in the middle of the keyboard. I would never use the TrackPoint and so regret the lost space, but if you’re a TrackPoint fan, then you likely won’t mind. My review unit’s display was touch-enabled, which I prefer.

Connectivity was excellent, with a full complement of both legacy and future-proof ports and a full-size SD card reader. Wireless connectivity was also strong with Wi-Fi 6E and Bluetooth 5.2 to go with optional 5G WWAN support.

Finally, all the usual business-oriented features are on hand. The vPro CPU will work with enterprise-level management and security tools, and there’s a host of security-minded features like the Intel Hardware Shield and match-on-finger fingerprint reader. What’s missing is more than the usual consumer-level one-year warranty, although Lenovo offers a wide range of business-level services at an additional price.

My review unit was equipped with the high-end touch-enabled 16-inch 16:10 WQUXGA IPS display, and out of the box, it looked so bright and colorful, with deep blacks, that I thought it was an OLED panel. When I applied my colorimeter, the display excelled, offering some of the best results we’ve seen in an IPS display.

Thanks to wide and incredibly accurate colors, tons of brightness, and high contrast, the ThinkPad X1 Extreme Gen 5’s display matches its performance in meeting the needs of demanding creators. The Dell XPS 17‘s is a rare IPS display that matches the ThinkPad’s. Note that the MacBook Pro 16’s display was tested with a different colorimeter that tests contrast differently; its contrast was equal to the OLED displays, but no better.

The dual upward-firing speakers were incredibly loud and clear, with excellent mids and highs. They couldn’t match the XPS 17’s and MacBook Pro’s deeper bass, though, as they lack those laptops’ subwoofers. The audio was still good enough that you won’t automatically grab a set of headphones.

The webcam is a 1080p version that provides clear video with plenty of detail in lowlight environments. There’s a ThinkShutter privacy screen and an infrared camera supporting Windows 11 Hello passwordless login support to go with a fingerprint reader embedded in the power button.

The most powerful option for ThinkPad fans

The ThinkPad X1 Extreme Gen lives up to its role as the most powerful non-workstation ThinkPad you can buy. For ThinkPad fans who are also demanding creators, it’s the best laptop you can buy.

It’s also quite expensive, which is why it becomes a less-appealing choice for those who aren’t committed to the ThinkPad line. There are several 16-inch laptops that are powerful creativity workstations and cost a lot of money, like the MSI Creator Z16P and Apple MacBook Pro 16. But there are also considerably less expensive options, like the HP Envy 16 that’s just as fast and also enjoys an awesome display (in its case, an OLED panel). That makes the ThinkPad X1 Extreme Gen 5 slightly less easy to universally recommend.