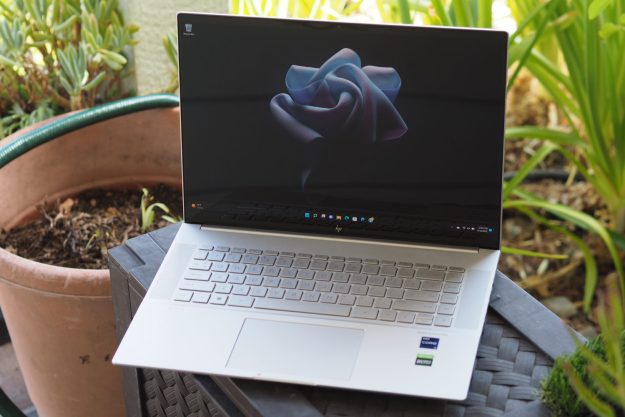 “The HP Envy 16 is beautiful, powerful, and surprisingly affordable laptop for content creators.”

HP’s Envy line lands in a unique space. These are premium laptops through and through, and often have the performance to back that up for content creators.

However, they aren’t as expensive as machines like the MSI Creator Z16P or the 16-inch MacBook Pro. A case in point is the new HP Envy 16, the replacement for the Envy 15, a laptop that’s been on our list of best 15-inch laptops and best video-editing laptops. Given its strong performance and solid build quality, the Envy 16 is an even more compelling entry than its predecessor.

Fastest when it matters

Performance is the name of the game with the Envy 16. The keyboard, display, and clean design will have been for nothing if the Envy 16 didn’t live up to its promise of excellent performance. Fortunately, it does.

On paper, the Envy 16 is a speedy mainstream laptop, especially given a thicker chassis and an upgraded thermal design with dual fans and a liquid vapor chamber. Note that the $1,180 entry-level configuration includes an Intel Arc A370M GPU rather than the RTX 3060, so choose wisely if GPU performance is important.

Interestingly, in our benchmarks, the Envy 16 was much faster at single-core tasks than at multi-core tasks. This extended to both Geekbench 5 and Cinebench R23, where the Envy 16 led the pack in single-core results while falling behind in multi-core. The HP Command Center utility, used to switch thermal profiles, had little impact. I’ve reported balanced and performance mode scores, but only minor differences exist with the Envy 16.

Creative applications tend to be heavily multi-threaded, meaning creators won’t benefit as much from the Envy 16’s fast single-core performance. Our Handbrake test that encodes a 420MB video as H.265 is a prime example, with the Envy 16 being slower than all but the MacBook Pro 16. And that includes laptops running the lesser Core i7-12700H.

At the same time, the Envy 16 performed well in the PugetBench Premiere Pro benchmark, which runs a live version of Adobe Premiere Pro and makes copious use of both the CPU and the GPU. It was the fastest Windows laptop in our comparison group in balanced mode. While it fell behind laptops like the Asus ZenBook Pro 16X and MSI Creator Z16P in performance mode, it was within spitting distance of the much more expensive Apple MacBook Pro 16 with its Apple M1 Pro CPU.

Synthetic benchmarks aside, the Envy 16 appears to be a strong performer in the kind of real-world applications that matter most to creators. It can also handle the most demanding productivity workflows with ease.

With a fast CPU and an RTX 3060, it’s natural to play some games on the Envy 16. I expected solid gaming performance given the high single-core performance, but the Env7 16 had mixed results. Its 3DMark Time Spy score was strong for an RTX 3060, but that didn’t translate across all our gaming tests.

Specifically, the Envy 16 was fast in Civilization VI and Assassin’s Creed Valhalla, but it fell behind in Cyberpunk 2077 and Fortnite. It’s probably safest to assume that you can run modern titles at 1080p and high graphics and then be happy when you find games that will run well at 1440p.

The Envy 16 focuses on performance and display size, not on the size of its chassis. In fact, HP deliberately extended the chassis to allow room for better airflow, and the migration to a 16:10 display adds some depth. Compared to its competition, though, it’s not overly large — for example, it’s slightly smaller than the MSI Creator Z16P.

It’s quite a bit larger than the Dell XPS 15, but the Dell has a slightly smaller display and tiny display bezels. At 0.78 inches thick and 5.12 pounds, the Envy 16 is thicker than the Creator Z16P and a bit lighter, and it’s thicker and heavier than the XPS 15. Overall, it’s not huge, but it’s still not a laptop you’ll want to haul around to the coffee shop.

Some extra weight comes from the all-aluminum chassis, which is quite sturdy and resists most bending, flexing, and twisting. Only a little keyboard flex differentiates the Envy 16 from the best, such as the MacBook Pro 16 and the Dell XPS 15. Aesthetically, the Envy 16 is conservatively designed, with just the right angles in the right place and no bling to distract from its minimalist good looks.

Of course, the primary appeal of a 16-inch laptop is its large display, which provides plenty of room to work. HP offers two displays for the Envy 16 at 16-inches and 16:10. I reviewed the 4K+ OLED panel, which is sharp and stunning.

By every metric but brightness, the display is perfect for the creators HP is targeting. Even though the brightness is a bit low, the colors are wide and accurate, and the contrast provides the typical inky blacks we expect from the best OLED laptops. Productivity users and media consumers will also love this display.

Quad speakers provide great-sounding audio, with clear mids and highs and more bass than usual. The only problem is volume — the Envy 16 doesn’t get very loud. It’s great sound for watching Netflix by yourself, but if you want to entertain a group, then you’ll want some Bluetooth speakers. Music sounds good, but again the volume gets in the way. If you like to crank your tunes, you’ll want a good pair of headphones. The Dell XPS 15 provides equally good audio that gets a lot louder.

The large chassis offers another advantage, specifically a spacious keyboard with large keycaps even though it’s flanked on each side by a speaker grille. That’s also a result of HP excluding a numeric keypad, which most buyers likely won’t miss. The keyboard switch mechanism wasn’t quite as precise as on the Spectre lineup, with plenty of travel and a light touch but not as snappy a bottoming action. It’s a comfortable keyboard that’s just one step behind the best.

The touchpad is disappointing in that it seems like there would have been room for a larger version. It was reliable in supporting Windows 11’s multitouch gestures and its click was confident and quiet, but HP could have squeezed in a considerably larger touchpad. The OLED display comes with multitouch support, and that was welcome.

Finally, the Envy 16 supports all the connectivity that most people need. I would have preferred to see a full-size SD card reader rather than microSD, and some people would benefit from an Ethernet port. But even so, connectivity is a strength, thanks to Wi-Fi 6E and Bluetooth 5.2 support.

It might seem wrong to call battery life an “incidental” aspect, but a machine meant to churn through demanding creative and productivity workflows is likely to be plugged in most of the time. And no fast performer will last long on a charge when the CPU and GPU are fully engaged.

Even so, the Envy 16 did reasonably well in our battery tests. Its 83 watt-hour battery, which isn’t a lot for this class of machine, managed to keep it running for almost 8.5 hours on our web-browsing test and nearly 13 hours in our video test.

It fell behind in the PCMark 10 Applications battery test at just 7.5 hours, but these are decent numbers for a fast laptop with a high-res OLED display.

You won’t find many 16-inch class laptops that last much longer, although the Dell XPS 15 was stronger and the MacBook Pro 16 was in another universe entirely. But if you’re doing less demanding work, you might get most of a day out of the Envy 16.

With such a large, high-res display, you’d expect the Envy 16 to be an excellent machine for videoconferencing. And you’d be right, thanks to the 5MP webcam with Auto Frame capabilities. The image quality was excellent during my testing.

There’s also an infrared camera for Windows 11 Hello passwordless login support and a physical webcam shutter for privacy controlled by a function key. HP omitted any user presence detection functionality that’s been showing up on more recent laptops, so there are no automatic sleep and wake capabilities.

A solid addition to the 16-inch class

We liked the performance and build quality of the Envy 15, and the Envy 16 improves on both. While it’s certainly a premium laptop, it’s less expensive than competitors like the MSI Creator Z16P and MacBook Pro 16 and faster than similarly priced laptops like the Dell XPS 15.

If you’re looking for a powerful creative workstation that won’t break the bank, then the Envy 16 is a solid option.

The best wireless keyboards for 2022
The best mini-LED laptops you can buy in 2022
Pico 4 VR headset is here to take on the Meta Quest 2
Best Microsoft Surface Pro deals for September 2022
YouTube’s dislike button is barely functional, says Mozilla
Norton Antivirus Free Trial: Get a week of protection
The RTX 4090 is begging for a game that can take advantage of it
Nvidia says falling GPU prices are ‘a story of the past’
TikTok is banning campaign fundraising on its app
Best desktop computer deals for September 2022
Best Apple iMac Deals: Get an Apple desktop for $539
Best Dell XPS Deals: Up to $600 off top-rated laptops
IPVanish Free Trial: Try it for a month, no strings attached