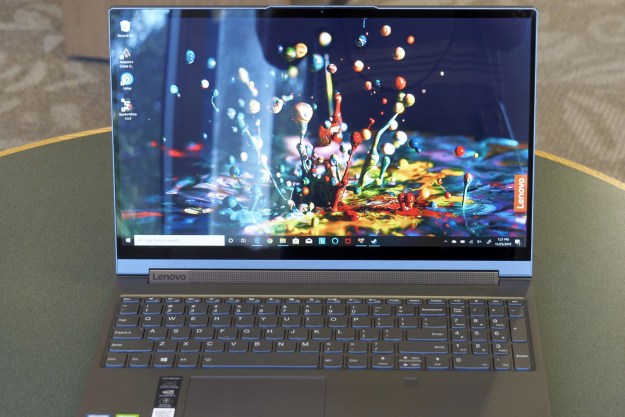 “The Yoga C940 15 is fast and well-built, but battery life and display quality hold it back.”

the best 2-in-1s are the “do-it-all” devices. In one day, you might need a laptop to type up your weekly report, fold it into a tablet to write some notes during a meeting, and then flip the display to watch the next episode of The Mandalorian. That’s the strength of laptops with 360-degree hinges.

The new Lenovo Yoga C940 15 wants to do even more. With options for up to eight-core processors, discrete graphics, and high resolution, you can now add content creation and light gaming to the list.

A media consumption machine at heart

If you want to use your laptop for editing photos or videos, you want wide and accurate colors, lots of brightness, and great contrast. The best 15-inch laptops offer excellent displays, including the XPS 15 and 16-inch MacBook Pro. Does the Yoga C940 play in that league?

Unfortunately, I don’t know for sure. The Full HD display on our review unit was average across the board — which today means a very good but not necessarily great display. Brightness was 339 nits, above our 300 nit threshold but not by much.

Color gamut was just okay at 71 percent of Adobe RGB and 96 percent of sRGB — this is where the typical premium laptop falls — and accuracy was off at 3.11 (less than 1.0 is considered excellent). Gamma was 2.7, darker than the perfect 2.2. Only contrast, at 1010:1, was above average.

Simply put, creative professionals won’t be happy with this display. However, thanks to Lenovo’s highly effective implementation of Dolby Vision HDR, the Yoga C940 excels at watching video. Flip it into media mode with the keyboard hidden behind the display and binging Netflix is an excellent experience.

The fantastic built-in soundbar means you won’t need headphones to enjoy your TV shows and movies.

Then, factor in audio quality, with an improved version of the Dolby Atmos speaker system from the Yoga C930. The design has been simplified, with the two-part hinge being morphed into a single-part version that’s more streamlined. The audio system retains the two tweeters in the hinge coupled with dual down-firing woofers underneath the chassis. The result is copious amounts of volume, intense clarity, and unusually powerful bass for a laptop. You won’t need headphones to enjoy your TV shows and movies on the Yoga C940.

If you’re a creative professional, though, Lenovo has you covered with a 4K UHD (3,840 x 2,160) that boasts 500 nits and VESA HDR support. I didn’t test this display, but I’ve found them quite excellent on laptops like the ThinkPad X1 Carbon and Yoga. That 4K version of the Yoga C940 will likely be a good option for creative professionals, but our review unit is not.

Most 2-in-1s, such as the otherwise excellent HP Spectre x360 15, top out at the same Intel 9th-gen Core i7-9750H. That’s a six-core 45-watt CPU that generally provides solid performance for editing photos and video. My Yoga C940 review unit performed admirably with this chip installed, generally keeping up with clamshell laptops with the same CPU like the Razer Blade 15 (a gaming laptop, no less).

That was true in both synthetic benchmarks like Geekbench 4 and 5 and in our real-world test that uses Handbrake to encode a 420MB video as H.265. In the latter test, the Yoga C940 took less than two and a half minutes to complete the test, compared to the Razer Blade 15 that took seven seconds longer and the Spectre x360 15 that took 16 seconds longer.

Laptops like the XPS 15 with the eight-core Core i9 inside are considerably faster, but as I mentioned earlier, the Yoga C940 can be equipped with that same processor. There’s good reason to believe that plugging in the Core i9 would result in a similar performance, based on the excellent thermals included here.

Regardless of what you think of using a 2-in-1 of this size, the Yoga C940 doesn’t make performance compromises.

You’re not giving up build quality, either

I’ve reviewed a few Yoga 2-in-1s, and one thing remains clear: Lenovo is devoted to making laptops that are tank-like in their build quality. The Yoga C940 15 is made from machined aluminum with excellent fit and finish and without any bending or flexing anywhere. That’s at least as good as the XPS 15 and Razer Blade 15, if not better.

The Yoga C940 makes the most of its conservative design. There’s little bling adorning this 2-in-1, keeping it well in line with Lenovo’s goal of making attractive laptops that won’t embarrass you in a boardroom. The HP Spectre x360 15 has a much more elegant and complex gem-cut design, and I like it. But I don’t dislike the Yoga C940, either, even though its design is so much simpler.

You’ll also find some relatively small bezels surrounding the expansive 15.6-inch display, with a reverse notch that houses the camera assembly and makes the display a little easier to grasp and lift. Those bezels make the Yoga C940 slightly smaller than the Spectre x360 15 (which has very large top and bottom bezels) and the XPS 15 (which has smaller bezels), and also a bit lighter than both at 4.18 pounds (versus 4.81 pounds for the HP and 4.5 pounds for the Dell).

In short, you’re not giving up build quality nor packing on too much size and weight to benefit from the 2-in-1 flexibility. And, Lenovo manages to include two USB-C 3.1 Gen 2 ports with Thunderbolt 3 support along with a single USB-A 3.1 Gen 2 port.

Everything right where you want it

The Yoga C940 15 uses the typical Yoga keyboard, meaning the keycaps are nicely molded and comfortable, but the mechanism is a little shallow compared to the much better ThinkPad versions. Typing is pleasant enough, but I do long for a little more travel and greatly prefer the keyboard on the HP Spectre x360 15.

The touchpad is large and supports Microsoft Precision drivers. That makes the full suite of Windows 10 multitouch gestures precise and useful. The touch display is equally responsive and a pleasure to use, and the Lenovo active pen provides for smooth inking and handwriting. The included pen slides into a slot on the Yoga C940’s chassis and automatically charges — that’s a convenient design, even if it makes the pen quite a bit smaller than those found on competitors.

Windows 10 Hello password-less login is provided by a fingerprint reader on the upper right of the keyboard deck that’s quick and accurate. I never found myself needing to swipe more than once to log in.

There’s also a TrueBlock privacy shutter that physically blocks the webcam for some added privacy. I prefer HP’s electronic toggle on its Spectre line, which completely removes an attack vector, but Lenovo’s solution is better than putting tape over the webcam.

But, does it game?

The Yoga C940 15 equips the same Nvidia GeForce GTX 1650 GPU as the XPS 15 and the Spectre x360 15, and it performs about the same as the former (Digital Trends hasn’t yet tested the latter). It’s slightly slower across our suite of gaming benchmarks, likely thanks to the slower CPU, and we imagine that you could choose the Core i9 and have a very competitive midrange gaming laptop.

In Civilization VI, for example, the Yoga C940 was within a single framerate of the XPS 15 at 81 frames per second (FPS) versus 82 FPS in 1080p and medium graphics, which was a surprise given the CPU difference. The Yoga C940 did well at ultra graphics as well. Turning to Fortnite, the Yoga C940 managed 62 FPS at 1080p and high graphics and 47 FPS at epic settings, making it a strong competitor in this popular title as well. I saw similar results in Assassin’s Creed: Odyssey.

The Yoga C940 15 is a fine midrange gaming laptop. It’s not quite as fast as the better-equipped XPS 15, but as a complimentary feature,

The Yoga C940 managed about 10 and a half hours looping a local video. That beats out the 4K XPS 15 by two hours but falls behind the Spectre x360 15 by almost two hours. And in our demanding Basemark web benchmark that stresses the CPU, the Yoga C940 fell in between the Dell and the HP, each of which lasted around three to three and a half hours.

The bottom line is that the Yoga C940, even with its more efficient Full HD display, isn’t likely to last you a full working day. Push the CPU and you probably won’t make it to half a day, and equip the 4K display and the results will be significantly worse. The Spectre x360 15 might be slightly larger, but it benefits from having more space for a bigger battery.

The Yoga C940 15 is a standout 2-in-1 primarily because it offers more power than has previously been available in the form factor. And that’s not nothing — you’ll find it offers a great combination of a 2-in-1’s flexibility and a clamshell’s power. The display may not keep up with the best you can buy, but the 4K option is serviceable, and battery life is the one weakness that stands out the most.

The HP Spectre x360 15 is another other powerful 2-in-1 alternative, although it doesn’t have a Core i9 option. It’s quite a bit less expensive, though, at $1380 on sale, and it has an OLED option if you want vibrant and accurate colors and inky blacks.

The best clamshell alternative is the Dell XPS 15, which can also be configured with a Core i9. The 4K IPS panel that Dell selected for the XPS 15 is excellent, and the 4K OLED panel is even better. You’ll pay $1,500 on sale right now for an equivalent configuration to our review Yoga C940, making the Lenovo $155 more expensive.

Finally, you could look at the Lenovo ThinkPad X1 Extreme, and even more powerful clamshell option. You’ll spend $1,616 on sale for the same configuration, but if you have money to burn you can spend up to $3,000 or more for a Core i9 and an OLED display.

The Yoga C940 15 is as robust as they come, and it feels like it will make it through the apocalypse without a scratch. The one-year warranty is disappointing, but we can’t fault Lenovo for this industry standard.

Yes. You can go with our reviewed configuration and enjoy a very nice media consumption experience. Or, you can upgrade the display and CPU and have a powerful 2-in-1 that’s not only great for binging Netflix and light gaming, but also for cruising through your high-demand creativity tasks.

Best gaming laptop deals for September 2022
Best laptop deals: Get a portable workhorse from $119 today
The best keyboards for 2022
The best wireless keyboards for 2022
How Nvidia’s DLSS 3 works (and why AMD FSR can’t catch up for now)
HP Spectre x360 13.5 vs. Dell XPS 13 Plus: flagship battle
Nvidia’s DLSS 3 could make the monstrous RTX 4090 a little less power hungry
You can now downvote comments on TikTok videos
Dell XPS 13, 15, and 17 laptops are all on sale today — save hundreds!
We can’t believe how big this HP Spectre x360 2-in-1 laptop’s discount is
Why gamers should avoid the Windows 11 2022 update
EVGA’s feud with Nvidia gives new options to GPU makers
Hurry! This Alienware gaming laptop deal cuts over $1,000 off the price