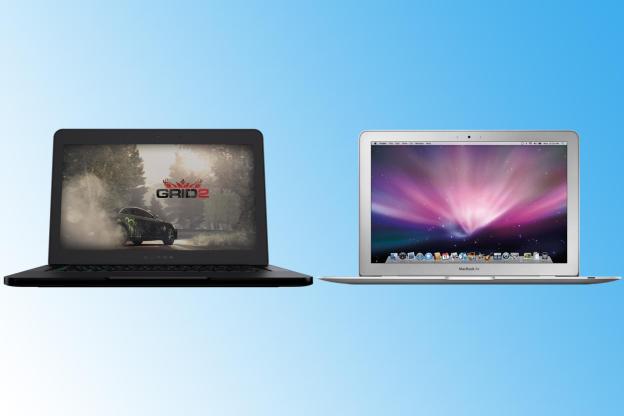 If the name Razer doesn’t sound familiar, it’s because it isn’t – yet. The company’s been gaining ground as of late thanks to its latest Blade laptop that claims to be thinner than a MacBook Air. With big names like Microsoft, Acer, HP, and Apple, already an established force in the PC market, you’d have to be a pretty ambitious to believe you could just jump in and secure your own chunk of the computing pie.

Based on the fact that it tossed its original Blade creation into the market without any apprehension, Razer obviously doesn’t care about stereotypes and general guidelines – it even touted it as the ‘world’s first true gaming laptop. The original Blade must’ve been successful enough to warrant two new versions this year, a 14-inch Blade and 17-inch Blade Pro. We reviewed the 14-inch Blade and loved it.

And if we didn’t view the Razer Blade as purely a gaming laptop, and stacked it alongside comparable notebooks, you would notice that it strikes a pretty close resemblance to the Apple MacBook Air. In fact, DT’s Matt Smith called the Blade an “emo Macbook that decided to become a roadie rather than get a real job.” Its black color is a night and day difference when stacked up against the MacBook Air, but both of these devices actually share a number of features. They both showcase flat un-textured surfaces, a uni-body metal chassis, and they both attach their display’s by way of a single, wide hinge.

But do the similarities continue beyond the design of these products and into their hardware substance? Let’s take a look.

As you can see, both base models come with a 128GB solid-state drive and both have Wi-fi, Bluetooth 4.0, USB 3.0 ports (though the Razer has one more than the Air), and an HD webcam. That’s where the similarities end though, and we get a picture of what separates these two devices from one another.

The Razer Blade has a solid 4GB of memory over the MacBook Air and features one of Intel’s newest Haswell processors. The other standout difference pertains to graphics. The MacBook Air 2013 Edition features integrated Intel HD 5000 graphics, which are decent, but do not provide the same capabilities as the Razer Blade’s Nvidia GeForce 765M GPU. Granted, we’re comparing a notebook that was tailor-made for gaming with an Apple device that was created for the general computing public. The Razer Blade has a couple more USB ports than the MacBook Air 2013, and it does feature an HDMI slot, but does not have a card reader.

The MacBook Air went through a pretty decent upgrade, with the main change focusing on battery life. Apple managed to craft a slim notebook that lasts approximately 12 hours on a single charge. Razer told us the battery life on the Blade is about six hours – half of what the Air offers.

And though there are some similarities, these two products are geared towards two different types of people. One is ported for gamers, and the other was designed for more general practices, yet, they still manage to match up fairly close to each other in both design and hardware specs. The Blade, of course, has a better video card and more RAM, as it should (to play games). The only other difference these devices share (and it’s a massive one) is price point.

Currently, Apple’s updated MacBook Air 2013 slides in at a price point of $1,100, which puts it in a pretty affordable position. The Razer Blade, however, starts off at $1,800. Although, if you’re a true gamer, you may end up tossing even more cash at Razer to upgrade the storage capacity from 128GB to 256GB.

Get this Dell laptop for $225 today