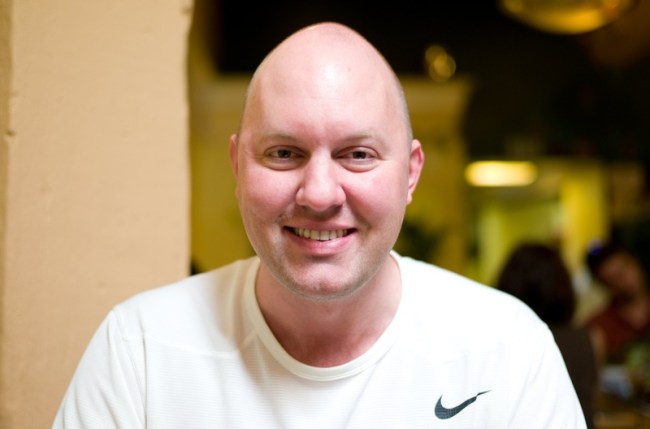 These days, many tech junkies and stock watchers will tell you that the multi-billion dollar valuations of companies like Facebook, LinkedIn and Groupon prove there’s a new technology bubble currently being filled with the hot air of speculators and investors hoping to get rich on the “next big thing” out of Silicon Valley. But that’s just not so — at least according to superstar venture capitalist Marc Andreessen.

During his featured interview at All Things Digital’s D9 Conference in Rancho Palos Verdes, California, on Wednesday, Andreessen — co-founder of VC firm Andreessen Horowitz, and founder of Netscape — shot down the notion that a tech bubble exists, saying that it can’t be a bubble because people are calling it a bubble.

“If a very large number of people think there’s a bubble, that makes us think there isn’t a bubble because a key characteristic of a bubble is that everyone thinks there is a bubble,” Andreessen said. He added that the Internet bubble of the 1990s was defined by a ubiquitous “we can’t loose” mentality that fueled unwise investments. “If everybody’s upset, it’s a good sign,” he added. “…I hope there are lots of bubble stories.”

Andreessen said that he has analyzed the price-to-equity ratios of some of the biggest technology companies, including Apple, Google, Cisco and Microsoft, and found that, since they are mostly trading in single-digit rations, it proves that investors are still wary about technology stocks due to the collapse of the previous bubble.

“What that tells me is that the public market hates technology,” he said.

When pressed on the success of LinkedIn, of which Andreessen is an angle investor, Andreessen assured that, despite the 90+ percentage jump in LinkedIn’s IPO price, the company was not overvalued. And because LinkedIn represents only a small percentage of the technology companies out there, it’s success on the open market is not indicative of a bubble.

“[LinkedIn is] only one company, it only just went public, it’s a thin float, the public market is starved for growth, you can’t even borrow shares to sell LinkedIn short yet,” Andreessen said. Plus, he said, “LinkedIn is an important company doing an important thing.”

Topics
Microsoft accelerates carbon reduction plans in new sustainability push
The tech behind cryptocurrency could save lives by fixing medical records
With a $350 billion contribution to the U.S. economy, Apple plays the patriot
NSA’s surveillance programs may be costing the tech industry up to $35 billion in lost revenue
What MacBooks needs to learn from competitors about transparency
Best Apple Deals: Save on AirPods, iPads, MacBooks and more
You’ll be surprised how cheap this 27-inch QHD monitor is today
We now know how Apple’s VR headset may handle video, and it’s pretty awesome
Best HP laptop deals: HP Envy, HP Spectre x360, and more
The first RTX 4080 laptops are much cheaper than we expected
Intel targets RTX 3060 takedown with Arc Alchemist price cut
Perfect for school, this 14-inch laptop is discounted to $150 today
One of the best HP laptops you can buy is $250 off right now