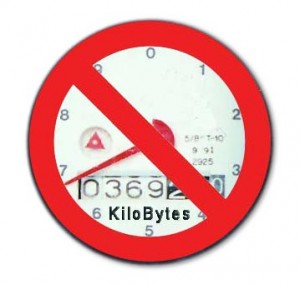 Our  neighbors to the north may now pay their Internet service providers based on how much they use the Web. Canadian telecommunications regulators made a ruling last week that would largely make it possible for smaller ISPs to continue to offer pay-per-month data plans.

Currently, many smaller Canadian ISPs lease bandwidth from larger ISPs on a per-customer basis, which allows them to offer customers unlimited bandwidth, and bill them monthly. Laws had prohibited larger ISPs like Bell from charging these wholesale customers (smaller ISPs) per gigabyte for usage, but the Canadian Radio-television Telecommunications Commission (CRTC) has moved to abolish that restriction, a shift in billing that will ultimately make its way down to customers.

One example is the small ISP TekSavvy, which under the ruling will be forced to the set the data ceiling at 25GB a month and charge customers between $1.90 and $2.35 for each additional gigabyte. TekSavvy formerly offered 200GB or unlimited options, which will be wiped away by the CRTC’s new regulations. According to an e-mail sent out to its subscribers, its premium, unlimited plan users pay $31.95 for will now only get them 25GB per month.

According to petition site Stopthemeter.ca, it would be less expensive to start using SSDs. “…It is now cheaper in Canada to put our downloads on to expensive SSDs, ship them across the country, and then throw them out instead of paying the $2 per GB our ISPs want to charge us when we go over our already ridiculously bandwidth caps.”

So, besides the customers and indie ISPs, who’s going to suffer because of the new regulations? Video streaming sites. Netflix (which was only just introduced to Canada), Apple, Amazon, and Hulu are bandwidth hogs, and only stand to increase the amount of data they chew through as their services’ quality improves.

Naturally, the ruling is already being challenged. Federal Liberals argue that it would limit competition and choice for consumers, and Canadian prime minister Stephen Harper announced via Twitter that he has ordered a review of the decision. “We’re very concerned about CRTC’s decision on usage-based billing and its impact on consumers. I’ve asked for a review of the decision.” According to CBC News, a decision will be reached by March 1. More than 200,000 citizens have already signed a petition against the new regulations.

How to minimize your data usage at home