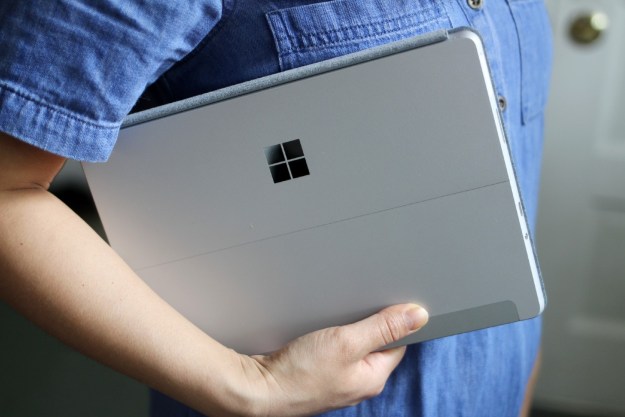 “The Surface Go 2 still doesn't live up to its endless potential.”

The Surface Go 2 is the awkward teenager in the Surface family.

The Surface Pro is the adult, confident and full of purpose. The upcoming Surface Duo and Surface Neo are the kids of the family, full of promise that remains to be proven. But the Surface Go 2? It squeezes in between. It’s smart, and has some idea of what it should be doing, but it doesn’t seem sure of itself.

Has Microsoft tweaked the formula enough to help the Go 2 find its place?

The Go 2 is the latest in a long line of Microsoft’s attempts to make a small Surface device. The Surface Go first launched in 2018, but it was preceded by the original Surface, which launched running Windows RT in 2012.

The size of the screen is the most notable change to the formula. It now measures diagonally at 10.5 inches, up from 10 inches. It’s only 5% more screen, but with smaller devices, every half-inch counts.

The screen itself is beautiful, especially for a $399 device.

Despite the increased screen size, Microsoft added just 0.05 pounds to the weight of the device, which is important. The Go 2’s portability is what differentiates itself from the Surface Pro and allows it to compete with the iPad. The ability to hold and operate the device in one hand is crucial.

To avoid growing in size, the Surface Go 2 has slightly smaller side bezels than its predecessor. I like that change, though I want more. I’ve been spoiled by the best laptops that do far more to increase the screen-to-body ratio. Of course, the bottom bezel does allows the Type Cover keyboard to sit up at its angle.

The screen itself is beautiful, especially for a $399 device. A laptop at that price is probably not even 1080p, and is probably dim and saturated. Not the Surface Go 2. It’s 1,920 x 1,280 panel is vibrant, bright, and sharp. There are laptops and tablets with more accurate colors or higher contrast, but none at this price.

That is, of course, except for the $329 10.2-inch iPad. It’s 2,160 x 1,620 display has a higher pixel density, and it’s also a bit brighter. But let’s be honest — the real advantage the iPad has over the Surface Go 2 isn’t in build quality or display. It’s in the software department.

The Surface Go 2 ships with “Windows 10 in S Mode.” That’s the tablet’s first issue with software. Not many Windows devices are sold with this ill-fated version of Windows 10, which prevents you from installing .exe files off the internet.

Think it won’t affect you? I quickly ran into the limits of S Mode when calling in for our morning editorial huddle over Zoom. The Surface Go 2 comes with a 5-megapixel, 1080p webcam that should be perfect for videoconferencing. However, I realized that S Mode prevented me from downloading the app and instead directed me to the Microsoft Store.

Fine. I click on over to the Store — only to discover that Zoom is nowhere to be found. It’s situational binds like this that make S Mode a troubled idea.

And yes, getting out of S Mode is simple. A reboot isn’t even required. But “S Mode” isn’t a phrase that even most tech-savvy people know, and they certainly don’t know why they should turn it on or off. The warning Microsoft gives about performance and battery life are enough to scare most people off from switching to normal Windows 10.

S Mode aside, the state of Windows 10’s tablet mode hasn’t improved in the past five years. It’s still not a touch-friendly software experience. Most of the gestures aren’t intuitive. It works, but it’s rough.

The Surface Go 2 is stuck in a strange transition from Windows 10 to Windows 10X.

Obviously, Microsoft has no interest in improving tablet mode, since it’s actively working on its replacement, Windows 10X. The company recently announced the touch-friendly interface will be coming to single-screen devices before the more experimental dual-screen ones.

A computer is only as good as the software it runs. The Surface Go 2, unfortunately, is stuck in the transition from Windows 10 to Windows 10X.

The Surface Go 2 has launched in the midst of shift in the iPad. Apple’s tablets now offer full cursor and mouse support, complete with a fancy Magic Keyboard attachment. It makes the iPad Pro feel more like a serious laptop replacement.

In terms of price, however, the Surface Go 2’s real competition is the $329 iPad from 2019. If that iPad could use the Magic Keyboard, the Surface Go 2 would be in trouble. It can’t, though, meaning the $329 iPad is stuck with the old Smart Keyboard, which lacks a touchpad. Alternatively, you might try a third-party keyboard case like the Logitech Combo Touch.

The Surface Go 2 has a solid keyboard, but it’s not perfect. Touch typing, for example, feels a bit off. The layout of the QWERTY row is a bit too far to the left, specifically making  the”R” key hard to reach without lifting the rest of my fingers. It’s exactly where the “T’ key should be.

I had the same problem with the original Surface Go, though  I found myself able to refamiliarize within a few hours. The solution? Floating my fingers over the keys rather than resting them like I would on a standard layout.

The touchpad isn’t huge, but it’s responsive. Other Windows 10 laptops at this price tend to feature textured, plastic touchpads that are nowhere near as smooth as the Type Cover’s.

Because of the small size, touch typing feels a bit off.

Although the Surface Go 2 doesn’t come with its Type Cover, Microsoft currently charges just $70 for the attachment. Apple charges $160 for its Smart Keyboard, and the Magic Keyboard starts at $250.

The Surface Go 2 comes in two variants. Both have dual-core processors, but the big news is the more expensive variant, which is powered by an Intel Core m3-8100Y. This is a first for the Surface Go, which only offered Intel Pentium Gold chips in the past.

It’s a big change for the better. The Surface Go 2 is nearly 50% faster than its predecessor in benchmarks. Apps load more quickly, multitasking is smoother, and hitting the performance ceiling is much more difficult. It’s not impossible, but it’s now beyond what many people will want to do with this device.

The best part? The Surface Go 2 is fan-free, staying silent and surprisingly cool during a variety of workloads.

The Core m3 model, however, costs $630. It also comes with 8GB of RAM and a 128GB SSD. That’s not a terrible price for the specs, but you can get an Intel Core i5 or a new AMD Ryzen 7 chip for the same price. Just don’t expect it to be as slim and sleek as the Go 2 is.

The Surface Go 2 is fan-free, and therefore stays completely silent and cool.

The new MacBook Air makes for a good reference. It was recently updated with a 10th-gen Core i3 processor, which still has just two cores and four threads. The Air benchmarks around 15% faster in single core and 20% faster in multi-core than the Surface Go 2. That’s not much of a gap, and the Air is much more expensive at $1,000 to start.

This is the version most people will likely purchase, and that’s a problem. It has less headroom for multitasking, especially if you intend to hook up an external monitor. When you equalize memory and storage, the Intel Core m3 option is only $80 more expensive, but offers a significant boost in performance.

There are situations where the Surface Go 2 is a fantastic companion device. It’s the perfect size to use in the kitchen for recipes and videos, or to take on a trip as both a work and media device. Yet these tasks demand great battery life, and the original Surface Go lacked endurance. It only lasted around five hours on a single charge.

The Surface Go 2 is even worse, thanks to the quicker Core m3 chip and 27 watt-hour battery. In light web browsing, it only endured around 4 hours and 13 minutes. With my standard mix of multitasking, streaming music, web apps, and Office, gained be around five hours. I even tried my normal routine in Microsoft’s new Edge browser, but that didn’t help.

My local video playback test was the one bright spot. It lasted an impressive 11 hours and 15 minutes, even beating Microsoft’s own claim of 10 hours. Unfortunately, if you’re doing anything more substantial, you’ll see that number drop significantly.

Budget laptops won’t often get you much more battery life, but the iPad is a longer-lasting device, providing 7 to 8 hours in many situations.

More expensive Surface devices also fare better; while they use more power, they make up for it with much larger batteries.

The Surface Go 2 is a device I want to love. In many ways, it’s the 2-in-1 I’ve always wanted. If it ran the right software, had a more comfortable keyboard and thinner bezels, and delivered better battery life, I might consider trading in both a tablet and a laptop to live the single device life.

Among tablets, the best alternative is the $329 iPad. It’s lighter, has a better screen, and crushes the Surface Go in software experience.

Among laptops, good alternatives include the $650 Pixelbook Go, which provides a better laptop experience, and the $650 Acer Swift 3 with Ryzen, which has loads more power.

The Surface Go 2 may start to feel clunky sooner than other laptops and 2-in-1s you can buy in 2020. The internals are already a year or two behind. Microsoft offers a standard one-year warranty on its Surface products.

No. It’s a solid device for people who want Surface functionality at a low MSRP, but most people will be better off with the Surface Pro, an iPad, or a Chromebook.