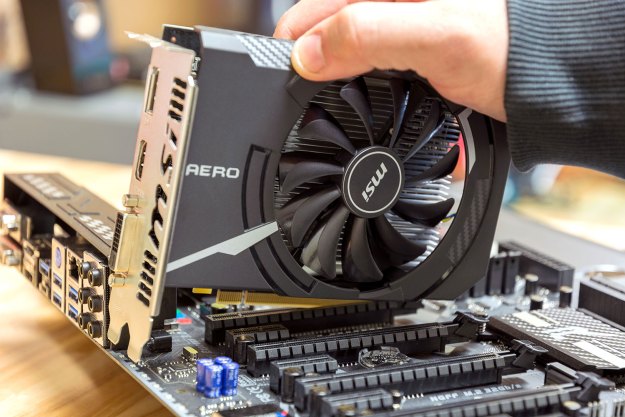 “The Radeon RX 550’s price is attractive, but it doesn't make games look beautiful -- even at just 1080p resolution.”

As professional gaming swells from a joke to a serious, international business, hardware companies have found ways to appeal to this new breed of gamer. One example is the eSports-focused video card, intended to play games like League of Legends or Overwatch at decent framerates without breaking the bank.

Of course, what games qualify as eSports titles, and how much power they need, varies greatly, and these low-budget cards tend to only address part of the professional gaming market. At just $85, the MSI Aero ITX version of the Radeon RX 550 may fall dangerously close to this peril. Is AMD’s new entry-level graphics solution right in the sweet spot for budget gaming, or too slow for its own good?

Under the (tiny) hood

Before digging into performance, let’s take a look under the Radeon RX 550’s hood. The reference design draws just 50 Watts of power, with 8 Compute Units and 512 Stream Processors, with up to 4GB of GDDR5, depending on the board partner. AMD states a 1,100MHz base clock and 1,138MHz boost clock, but again, that will vary based on card and cooling options.

Our review unit is an MSI Aero ITX version, with a simple, short cooler and no external power demands. There are no reference models this time around, and most other AIB partner models will have one fan and similar power requirements. MSI bumped the maximum boost clock up to 1,203MHz — not too shabby, considering this particular model end of the Radeon RX 550’s price spectrum. It only has 2GB of GDDR5, which we think is the right choice for a video card in this price bracket. However, a 4GB model is available for $100, too.

Like a lot of cards its size, this version of the Radeon RX 550 only has a single HDMI port, a single DisplayPort, and a lone DVI-D. Those ports give users options, but only for one screen. Multi-monitor setups can be a bit tricky without two of the same port.

With the boring stuff out of the way, let’s dig right into our performance testing. We benchmarked the Radeon RX 550 on our high-end test rig with an Intel Core i7-6950X, 16GB of RAM, and an Intel 700 Series SSD. It’s certainly overkill for the card, but we have a wealth of test data for it, and it should allow every graphics solution to reach its full potential, unencumbered by potential bottlenecks.

Even in our synthetic testing, things don’t look good for the Radeon RX 550. It’s almost 50 percent slower than the GTX 1050 we last reviewed, which was also an MSI offering. The GTX 1050 sports a slightly higher 75W TDP, but it’s able to draw enough power from the board, so the difference isn’t likely to have an effect on overall system capabilities.

Ouch. The Radeon RX 550 continues to fall well behind the GTX 1050, and that’s a serious problem. While the GTX 1050 is a bit more expensive, the cards are already in a precarious position market-wise, and they don’t come close to producing playable framerates at 1080p in modern games.

Yes, it’s true the RX 550 will run Counter-Strike or League of Legends without issue, but that’s true of any video card. Most gamers are not going to want to stick to just one game. And some modern competitive titles, like Overwatch, can be demanding.

Value is also an issue. As you can see, the RX 550 is demolished even by the GTX 1050. A more serious card like the RX 570 will prove several times quicker in many games. Yes, it’s more expensive, but you’re getting more FPS per dollar.

MSI covers all of its graphics solutions for a full three years from manufacturer defects and issues. That’s a premium warranty for a GPU at any price, with most OEMs just offering a one year warranty.

The least expensive Radeon in the RX 500 series may be affordable, but you get what you pay for. Our MSI Aero ITX review unit was unable to keep up a 60 FPS average at 1080p in any of our modern games, even with the settings turned down to medium. It’s a card meant for casual MOBA players, or the odd Rocket League match on the couch, and that’s about it.

Yes. With settings at modest levels, the GTX 1050 comes a lot closer to our ideal scores in more games, and iterations are frequently available under $100. MSI’s GTX 1050, with a similar cooler, was on sale for $85, the same as the Radeon RX 550, at time of this writing. Even when it’s not on sale, the added performance is well worth another $20.

While the movement to higher resolution panels than 1080p has been more of a crawl than we expected, no card at this price is going to set you up for gaming, even at the current standard. You’re trading a lot of performance to save some dollars and keep from upgrading your power supply, and it really shows when it comes to longevity.

No. The Radeon RX 550 tries to strike at a niche market, and doesn’t manage to do it better than cards at exactly the same price. Users shouldn’t head into a sub-$100 GPU hoping to play brand new titles at smooth frame rates, and that’s doubly true here. If that’s all you have to spend, the GTX 1050 is just a better choice.

These NVIDIA Studio laptops are uniquely crafted for content creators