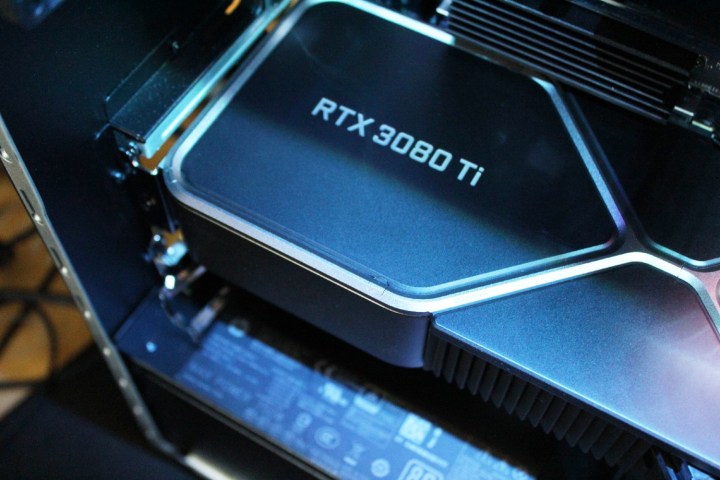 Nvidia’s brand-new graphics card, the highly anticipated RTX 3080 Ti, went on sale Thursday, June 3. The card was meant to be a Band-Aid for the current shortage of GPUs, presenting a powerful alternative to the RTX 3080 and a good replacement for the 3090. Unfortunately, the card sold out immediately after hitting the stores, even though it had a pretty hefty price tag.

A new graphics card hitting the market is always an exciting RTX 3080 Ti prospect, but Nvidia’s latest release is more than that. At a time when countless users can’t build their new PCs due to the unavailability of graphics cards, many were hoping that the RTX 3080 Ti might fix the problem to some extent. The card features a Lite Hash Rate limiter, making it less attractive to those interested in cryptocurrency mining. This gave many users a glimmer of hope. However, the GPU came and went in a flash and is now listed as out of stock at many online retailers.

The card itself sports some pretty exciting specs. The Founders Edition, which is Nvidia’s own design, comes with a base clock of 1,365MHz that can be boosted to 1,665MHz. It has 12GB of GDDR6X memory, putting it just above RTX 3080 but still far below RTX 3090’s 24GB. With 19Gbps memory speed, 912GBps bandwidth, and a 384-bit memory bus, this is a powerful card in its own right.

In our benchmarks, the card showed an increase in performance compared to the RTX 3080. Tested in some of the latest games as well as in Time Spy, RTX 3080 Ti provided an up to 10% jump in frames per second (fps) from RTX 3080. It’s worth noting that this boost comes with a $500 increase in price.

Nvidia’s new release was put on sale starting at $1,200 for the Founders Edition. Other than the Founders Edition, customers were briefly able to pick between other brands, such as Asus, MSI, Gigabyte, ZOTAC, Colorful, and more. These cards offer slightly varying specs, a different design, and sometimes better cooling than the shrouded model made by Nvidia.

RTX 3080 Ti was put on sale at most online retailers, such as Newegg, BH Photo, Amazon, Best Buy, and Nvidia’s own online store. It’s now listed as sold out, although BH Photo has still marked it as “coming soon”, so perhaps that could be a glimmer of hope for some users.

The card will undoubtedly find its way back onto the market at much higher prices. Graphics card scalpers are likely to try to resell it with a huge markup. Online retailers, including Nvidia, will likely restock the card sooner or later. Until then, it’s back to the GPU drought for all of us.