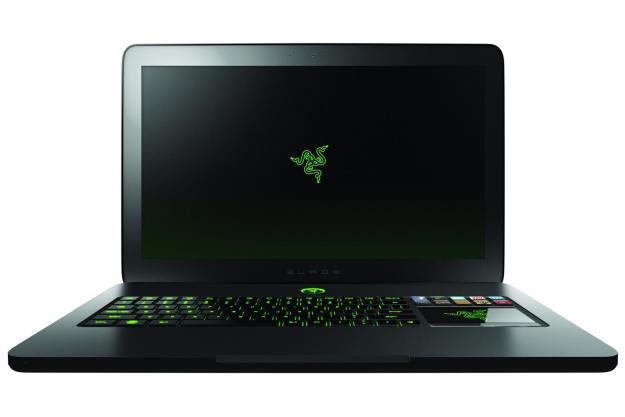 When new companies enter the PC business they usually do so on the strength of a large existing consumer electronics empire. Razer, however, never got that memo. The company moved boldly forward over the last two years with the original Blade, an extremely thin laptop with unique, customizable LED-backlit keys.

Exactly how well the original model sold remains a mystery, but it apparently was successful enough to merit not one but two follow-ups. For 2013, Razer re-designed the edge and split it into two different models: the 14-inch Blade, and the 17-inch Blade Pro.

The Blade cuts through expectations to deliver a uniquely powerful Ultrabook.

We received the Blade for review, and though it’s the most modest of the pair, its specifications are nothing to laugh at. Razer paired a 4th-gen Core i7-4702HQ processor with Nvidia’s new GeForce 765M discrete GPU, and packed in 8GB of RAM and a solid-state hard drive. Yet, in spite of this power, the system is less than 17mm thick and weighs a mere 4.1 pounds.

The Blade isn’t cheap, though. Storage capacity is the only option, and the base model, with a 128GB drive, sells for $1,800. Stepping up to the 256GB drive, which we received in our review unit, sets the price just shy of $2,000. Competitors generally offer even more for the same price, but Razer’s ace is portability. Does the world really need a thin gaming laptop?

The Blade looks like a MacBook that decided to become a roadie instead of getting a “real job.” Emulating Apple isn’t uncommon, but the similarity between the Blade and a MacBook Pro is uncanny. Both have a uni-body metal chassis with flat, un-textured surfaces; both have sharp exterior lines; and both use a single, wide hinge to attach the display. The Blade even approximates the look and feel of the indentation below the Pro’s touchpad, which provides a grip to assist in opening the laptop.

This is a gaming system, however, so there are touches that clearly distinguish it from anything designed in Cupertino. Matte black is the only color available, a green LED back-lit logo adorns the rear of the lid, and all other design elements are subtle rather than explicit. The power button, however, is impossible to find in a dimly lit room – Razer may’ve gone a little too far with its design touches.

MacBook similarities aside, the Blade is a handsome laptop that offers the quality we expect from a $2,000 machine. Everything looks and feels tightly wound. The few panel gaps that exist are nearly invisible, the chassis is rock solid, and the display hinge is perfectly designed to open with grace yet never wobble during use. Not even Alienware can match the precision of Razer’s design.

Gamers will be able to connect peripherals via two USB 3.0 ports and one USB 2.0 ports. There’s also HDMI-out and a combo headphone/microphone jack.

We think three is a respectable number of USB connections for a gaming laptop since it allows for an external hard drive, mouse, and keyboard simultaneously. We do wish individual headphone/microphone jacks were provided, as many gaming headsets (including several by Razer) aren’t compatible with a combo connection.

A better keyboard than you’d expect

Gaming laptops don’t need to have great keyboards, so most don’t. We’re happy to report that Razer shipped an excellent set of keys with the Blade. There’s more than enough space for enjoyable typing, individual key travel is good enough, and no keys are oddly located or truncated in size. There are very few laptops of any breed that provide a better typing experience.

There are very few laptops of any breed that provide a better typing experience.

The 14-inch Blade does drop the unusual customizable keys found on the larger Pro. Honestly, we don’t miss them. Though a cool concept, they never felt necessary, and their presence in this smaller laptop would both cramp the keyboard and inflate the price.

Backlighting is standard and can be adjusted to one of ten different levels – a great feature that more laptops should emulate. There’s almost no light leak, as well, so using the laptop in a pitch-dark room is both easy and enjoyable. We only wish that the LED lights could adjust for color. There’s nothing wrong with green, but we prefer to have the option since several competitors offer the ability to change colors.

As for the touchpad, although its smooth surface is not well defined from the surrounding palmrest, it’s near perfect otherwise and deserves praise. There’s plenty of room, multi-touch works well, and sensitivity is excellent. Razer even includes non-integrated left/right buttons.

Bright as the sun, but not as beautiful

The Blade’s display doesn’t look up to par at first glance, and testing proved this subjective impression to be true. We found the display can render just 63 percent of the sRGB gamut and that it offers poor performance in both contrast and black levels. The lack of quality is disappointing because it saps games of life and vibrancy.

Not everything about the display is bad, however. Maximum brightness is extremely high and the display’s matte coating resists glare. These factors combine to make the laptop usable in almost any lighting condition. In a normal room, the laptop can be set to just 50 percent or even 25 percent of maximum, which helps extend battery life.

While our eyes weren’t 100-percent pleased, our ears were enthused. The Blade’s speakers offer robust sound that’s both clear and loud. A decent pair of headphones is still an improvement, of course, but the built-in speakers work well if you don’t have any kind of external equipment on hand.

Gaming on the go

We’ve tested small laptops with discrete GPUs in the past, but most haven’t lived up to their promises. Razer, however, wisely waited for Intel’s new Haswell processor before launching its update of the Blade – a decision that paid off in our battery benchmarks.

The Blade looks like a MacBook that decided to become a roadie instead of getting a “real job.”

Peacekeeper, a Web browsing benchmark, ate through the battery in four hours and 58 minutes. That’s better (by a hair) than the Lenovo Yoga 11S, Acer Aspire R7, and Asus Zenbook 13-inch, all of which have a dual-core rather than the quad-core found in the Blade. Even the Battery Eater load test required an hour and 47 minutes to drain a full charge, which is great for a laptop with powerful discrete graphics. A conservative user could squeeze six to seven hours of endurance from the Blade.

Our wattmeter showed that, despite its endurance, this laptop really sucks down the juice. At idle, with the display at maximum, we recorded 24 watts of consumption. At full load, that figure jumped as high as 67 watts. Though that sounds like a lot, these numbers are good for a gaming system as most consume 80 watts or more at load.

At the heart of the Blade is a cutting-edge Core i7-4702HQ quad-core processor. This is not a low-wattage part, and the base clock speed of 2.2 GHz (with Turbo max of 3.2 GHz) reflects that. In our SiSoft Sandra Processor Arithmetic benchmark, the processor managed a combined score of 98.26 GOPS, and 7-Zip came to a result of 17,504 MIPS. These aren’t record-setting results, but they’re in league with thicker, larger laptops like the Lenovo Y580 and Samsung Ativ Book 8.

PCMark 7 came to an incredibly favorable result of 6,028. This is the highest score we’ve ever recorded from a laptop. In fact, it’s superior to some desktops like the Alienware X51. There’s no area where this laptop is weak; everything, including the hard drive, performs well.

Synthetic testing with 3DMark showed a system that’s capable but not incredibly powerful. The Cloud Gate test came to a score of 10,695, and Fire Strike reached 2,260. Both figures are four to five times better than a run-of-the-mill Ultrabook.

Real-world gaming proved this slim system can handle modern titles. Skyrim ran at an average of 52 FPS with settings configured to Ultra, and Deus Ex: Human Revolution ran at a similar framerate with all details turned on and at max. We also played Civilization 5 and Diablo III, both of which were extremely smooth at maximum detail.

At idle, the Blade is as mild-mannered as any Ultrabook we’ve reviewed. Though temperatures peak at 90 degrees Fahrenheit, that’s only in a small area near the rear of the chassis. The fan is almost silent.

Load a game, however, and the laptop’s demeanor changes. External temperatures can rise as high as 115 degrees, and the fan, reaching a peak of almost 46 decibels, becomes audible. Neither result sets a record, but be warned: this laptop will feel hot after a long gaming session.

The original Blade was interesting, but it fell short in performance and portability, making it more of a curiosity than a strong choice for consumers. Now, thanks to new hardware and a new design, Razer fulfilled its original vision. This gaming laptop can handle most games at high detail, yet it provides battery life that’s just a tad above an average Ultrabook. The Blade cuts through expectations to deliver a uniquely powerful Ultrabook.

Our one serious complaint is the display, which lacks contrast and vibrancy. Premium Ultrabooks and gaming laptops offer better quality on average, and this flaw hurts the subjective look of games played on the Blade. Its display is the only barrier between this laptop and an Editor’s Choice award.

Price is another obstacle, but it’s not insurmountable. Two grand is not unusual for a premium gaming system; and while competitors that sell for the same are a bit quicker, they’re usually at least an inch thick and weigh five to nine pounds.

This leaves gamers with a choice. Big laptops like the Asus G-Series and Samsung Series 7 Gamer offer a better display and somewhat quicker hardware, yet the Blade is more portable and more usable as a day-to-day PC. Neither option is obviously superior, but at least Razer’s laptop presents a strong alternative for those who don’t want to lug around a brick.