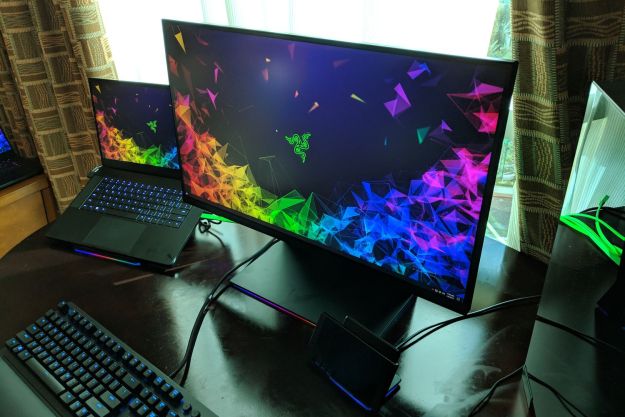 “Razer’s Raptor 27 brings the company’s signature style to your monitor.”

Razer’s ecosystem of gaming products extends far beyond laptops and mice, and the newest option is a gaming monitor called the Raptor 27, first introduced at CES 2019.

This desktop display has all the things you’d expect in a gaming monitor, but Razer has also snuck in a few innovations that make this an awesome alternative to a boring, run-of-the-mill screen.

Just a glance makes it clear the Raptor 27 is a tried-and-true Razer product. The materials used are the first giveaway. The frame, base, and stand are all made of machined aluminum, finished in a matte black to match Razer laptops. Interestingly, the top portion of cabinet uses a cross-stitched material that switches up the otherwise all-aluminum texture. Edges and corners are squared off for a sleek, modern look.

Chroma makes its presence known, though Razer hasn’t glued LED strips to every possible surface. There’s nothing flashing in your face and lighting up your desk. Instead, the subtle glow beneath the base gives just a hint of personality. The lights can, of course, be controlled and customized with Razer’s Synapse 3 software and can sync with other Chroma-powered products in your setup.

Unlike a lot of monitors, the stand holding up the screen isn’t a thin piece of plastic. The downside, though, is the Raptor 27 is meant only for your desk. It can’t be disconnected from the stand. If you’re interested in VESA mounting, you’ll have to look elsewhere. That also means swivel is out of the question. You can, however, easily reposition the monitor up and down.

Which brings us to the most interesting and intuitive thing about the Raptor 27. Cable management. It’s not usually the most exciting topic, but what Razer has managed to make it downright cool. From its upright position, the screen can be tilted back to a 90-degree angle, which exposes the downward-firing ports. If you’re someone who’s tired of feeling around in the dark for your monitor ports, this solution feels elegant. Better yet, because it’s all made of aluminum and firmly attached to the display, it all feels when adjusted.

Not only do you have easier access to your ports, your cables are all threaded through and lined down the back of the stand. Flat, neon green cables are included in your purchase. Those who like to have a bit more control over cables and connections probably won’t appreciate this, but it makes for one hell of a clean desk.

Selection is your standard array of HDMI, DisplayPort, two USB-A 3.1, and USB-C. Razer says the USB-C port can be used to power “low-power” products, but we don’t yet know if can handle something like a 15-inch laptop.

The menus, located just on the lower back side of the panel, are controlled with a five-way joystick that felt intuitive in a short time with it. Included in the menu are numerous gaming modes,including FPS, Racing, MMO, and Streaming.

The gaming features we all want

The specifications of the Raptor 27 make it clear Razer knows what gamers are looking for. It’s a 27-inch IPS display with support for every important feature including; HDR400, FreeSync 2,  a 144Hz refresh rate, and a one-millisecond response time. Razer says its working on inclusion of G-Sync, though that’s not in the cards yet.

We’ll have to wait to test the image quality of the display ourselves, but Razer did mention it covered 95 percent of DCI-P3 color gamut and maxed out at 420 nits of brightness.

Razer calls the Raptor 27 an “early production design,” so we don’t know exactly when it will release, and the specifications could change. Pricing starts at $700, with Razer stating the monitor is on track to ship “later this year.”