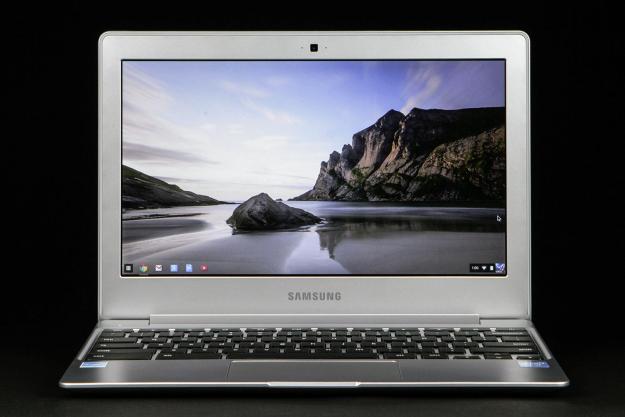 “Samsung’s new Chromebook 2 features solid construction, a nice keyboard, and improved battery life. However, we wish it had 4GB of RAM.”

Samsung already sells an 11.6-inch Chromebook 2 that comes in black or white, runs on a Samsung Exynos 5 processor, sports 4GB of RAM, and currently sells for about $300. But it seems the company is looking to entice customers who don’t have quite as much to spend, and might otherwise opt for Asus’ C200 Chromebook, or Acer’s C720.

The Chromebook 2 is a very solid entry into a now-crowded market.

At $249, Samsung’s new Chromebook 2 XE500C12 attempts to deliver the same solid build quality and comfortable keyboard experience that Samsung’s pricier Chromebook 2 does. But does it offer up anything new?

Battery life is no doubt helped by a shift to an Intel Bay Trail-M mobile class processor, but this model also drops the RAM down to just 2GB. How does that impact the balance between endurance and performance? That’s another key question we explore here.

Here’s how the new Samsung Chromebook 2 XE500C12 holds up.

Aside from its silver shade, this version of the Chromebook 2 looks and feels an awful lot like the previous model. That’s a good thing, because while the system is entirely clad in plastic, and is paired with a faux-leather pattern on top, it feels solid and durable in a way that puts most budget Windows laptops to shame. There’s no creaking, no give, and no wasted space to speak of.

At 0.7 inches, the Chromebook 2 is also reasonably thin. It’s also pretty light, weighing in at 2.65 pounds. If you toss it in a bag, you’ll barely notice that it’s there. The power adapter, which is pretty small, is about the size of a cellphone charger. However, the power prongs don’t fold into the brick, which makes it slightly less travel-friendly.

Port selection is good, consisting of a USB 2.0 port, and a headphone/mic jack on the left edge. On the right, you’ll find the power jack, a USB 3.0 port, HDMI, and a MicroSD slot.

The MicroSD slot allows you to supplement the system’s 16GB of on-board storage with more space, but we’d prefer a full-size SD slot here, which is found on other Chromebooks. At least with two USB ports, you can plug in an SD card reader, and still have a spare port for another peripheral.

The speakers are perched under the front edge of the laptop, and fire audio downward. You shouldn’t expect them to produce cubicle-shaking sound, or heaps of bass. However, at maximum volume, they pump out enough audio to fill a quiet room, and we didn’t notice any distortion either.

The Chromebook 2’s display sports a resolution of 1,366 × 768, which is par for the course for Chromebooks in this price (and size) range. It also gets reasonably bright, though not impressively so. The screen also has viewing angle issues, as is almost always the case with low-priced laptops.

It feels solid and durable in a way that puts most budget Windows laptops to shame.

From either side, viewing angles are okay, though brightness and contrast drop off quickly. Looking at the screen from above or below poses more problems. Move just a few degrees away from straight on, and images wash out. Look from an angle above, and everything starts to look white. Tilt the screen back and look from below, and black overpowers the on-screen images.

Again, to be fair, these issues plague most budget-priced laptops, and they exist in Windows-based machines that cost much more as well. So, while we wouldn’t exactly call this screen “bad” by Chromebook standards, it certainly doesn’t impress either.

We have better things to say about the keyboard and touchpad. Keyboards on Chromebooks tend to be pretty good, considering their size. They should be, because if you aren’t going to get a decent keyboard, you may as well save yourself some money by getting a tablet.

The Chromebook 2’s keyboard isn’t leaps and bounds better than those found on other Chromebooks, but it does feel solid. It features a reasonable amount of travel, given the laptop’s 0.7-inches of thickness. The dedicated half-size keys up top make it easy to adjust volume and screen brightness, and move back and forward between different Web pages as well.

The only keys that really feel cramped are the four half-sized arrow buttons, which are jammed into the space of three normal-sized keys in the lower-right corner of the keyboard. However, it’s worth noting that this layout is common with laptops of this size.

Measuring in at 4.25-inches diagonally, the Samsung Chromebook 2’s touchpad isn’t huge, but it doesn’t exactly feel cramped either. It generally performs better than those found on most budget Windows laptops, handling both cursor movement, and two-finger scrolling pretty well. Plus, the click mechanism beneath the touchpad has a good amount of resistance, but doesn’t feel stiff.

The Chromebook 2’s Celeron Bay Trail-M N2840 processor can’t keep up with the Haswell-based Celeron chip that powers Acer’s C720P. The Chromebook 2’s score of 1,685 on the Peacekeeper Web browsing benchmark is a far cry from the C720P’s mark of 2,909 on the same test. However, Samsung’s 2012-era Series 3 Chromebook did significantly worse, scoring just 1,226.

Once we loaded up seven or eight tabs while streaming music with SoundCloud, the system started to chug.

In anecdotal testing, the Chromebook 2 is generally responsive, and never felt sluggish when performing basic tasks. This includes writing emails while streaming music, jumping on Facebook, or doing some Web browsing in another tab. It also handled a few browser-based games fairly well.

However, once we loaded up seven or eight tabs while streaming music with SoundCloud, the system started to chug. There was an occasional delay between our keystrokes, and the moment they would appear on-screen. Audio becoming intermittently choppy as well. This got worse when we were also downloading files, or adding Chrome apps at the same time.

The bottom line. If you don’t do more than four things at once, and you limit the number of open tabs, the new Samsung Chromebook 2 should suit you just fine. But for surfers who open multiple windows, paying extra for a Chromebook with 4GB of RAM is definitely advised.

With a solid build, improved battery life, and good audio for an 11.6-inch laptop, the Chromebook 2 XE500C12 is a very solid entry into the now-crowded sub-$300 Chromebook market. If your budget is tight, note that Asus’ $200 Chromebook C200 has 2GB of RAM, as well as a similar (though slightly slower) Intel Bay Trail-M processor.

While the Asus Chromebook is chunkier, it also has a beefy battery, which the company says lasts 11 hours.

As much as we like the look and feel of Samsung’s new Intel-powered Chromebook 2, those looking for the best value for their money, especially if long battery life is important, should consider Asus’ C200 as well.