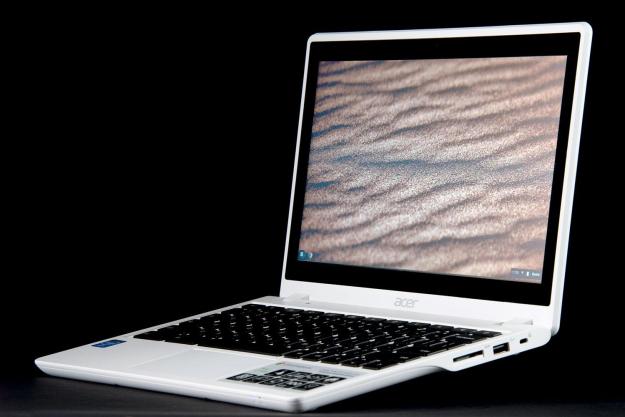 “Attractive and quick, Acer’s latest Chromebook manages to walk the line between portability and usability.”

Chromebooks have come a long way over the last three years. What began as a seemingly half-hearted experiment has matured into a legitimate computing experience, albeit one that remains limited in scope. A number of PC makers, inspired by strong sales, have jumped on board or announced intentions to do so. However, the Chromebook movement initially had two PC manufacturers behind it from the start; Samsung and Acer.

The latter originally entered the market as a lower-cost alternative to the more expensive, but much nicer, Samsung Chromebook. Over time though, Acer’s quality has improved without inflating the price. Our review unit, the C720P-2600, includes a touchscreen, a Haswell-based Intel Celeron processor, two gigabytes of RAM and a 32GB SSD, all for $299.

That’s $100 more that Acer’s own entry-level model, the C720, but barely more than HP’s Chromebook 11 and is roughly on par with the recently discontinued Samsung Series 5 Chromebook. On the whole, the C720P still looks like a good value on paper, but does it beat new competition from HP and Toshiba?

Our review unit, clad in “Moonstone White,” looks like something the Galactic Empire would hand out to Storm Troopers relegated to desk duty. A brilliant white finish dominates the exterior. Once you open the system up, the black keyboard and display bezel provide much-needed contrast. You can also choose a more mundane silver model, but the C720P Chromebook looks great in white.

The attractive exterior gives way to a ho-hum chassis . Plastic is the only material on the menu and Acer makes no attempt to class up the system with metal accents or other flourishes. The materials used here are tacked together well though. Panel gaps are small and chassis flex, though evident if you abuse the keyboard or twist the display, is minimal.

For $299, users should only expect the basics, and Acer’s C720P Chromebook actually looks and feels a bit more expensive than alternatives from Samsung and Toshiba. Only HP’s Chromebook 11, which adds clever color accents, has a more premium feel.

Connectivity includes one USB 3.0 port, one USB 2.0 port, HDMI, a combo headphone/microphone jack and a card reader. This is a decent selection for a system of this size, but we wish there were two USB 3.0 ports instead of just one.

Small, but not too small

Acer, a veteran of the netbook and Chromebook markets, has perfected small keyboards. A blindfolded user would have difficulty guessing that the C720P Chromebook is an 11.6 inch system just by touching it, as its spacious edge-to-edge keyboard seems like something that would be found on a larger laptop. While a few keys are truncated, like Backspace, most are large enough for quick, accurate touch-typing, and the function keys are larger than those found on some 15.6 inch notebooks.

Unfortunately, backlighting is not available with the C720P Chromebook. This is no great surprise, as no similarly priced competitor offers this feature.

The touchpad, which is about four inches wide and two inches tall, provides plenty of space and feels responsive during normal use. Multi-touch gestures are smooth and easy to pull off. We’d like to get more travel out of the integrated left/right mouse buttons, but the system is configured with tap-to-click on by default, and it works so well that tactile buttons are hardly needed.

Yes, you can touch

While the C720P Chromebook’s 1366×768 display looks reasonably sharp, contrast is low, and dark images rarely dim below a hazy gray. Brightness maxed out at 184 lux, which isn’t sufficient to overcome glare in a bright, sunlit room.

Acer’s C720P is a top pick among the current batch of 11.6 inch Chromebooks.

We also noticed some unusual stuttering during fast movement in videos. At times, a portion of a previous frame would remain visible while a new frame was being rendered. We confirmed this as an issue by watching the same clip on other systems, none of which exhibited this problem.

Though its not a treat to look at, the touchscreen is a unique feature, at least as Chromebooks go. The only other Chromebook equipped with touch is the Chromebook Pixel, which sells for $1,299. Surprisingly, touch functionality isn’t awkward. Chrome OS, which normally uses icons instead of text, fits touch well, and the screen feels perfectly smooth and responsive. The notebook’s small size is a boon too, because the touchscreen is always within easy reach.

Audio quality is so-so. Maximum volume is loud enough to fill a small room with sound, but also introduces distortion even into spoken dialogue. You’ll want to use a pair of external speakers or headphones if you’d like to enjoy music or a movie.

Haswell has what it takes

At the heart of the Acer C720P is an Intel Celeron 2955U dual-core CPU clocked at 1.4 GHz. Based on the latest Haswell architecture, this processor led the system to a Peacekeeper web browsing benchmark score of 2,909. This dominates the Samsung Series 3, which is powered by a Samsung Exynos processor. It scored a 1,226 when we reviewed it in 2012.

In fact, the Acer stands out as the quickest 11.6 inch Chromebook currently sold. Toshiba and HP offer the same processor, but only in 13 inch or 14 inch models. The HP Chromebook 11, though similar in size to the C720P, has an Intel Celeron CPU clocked at 1.1 GHz, and Samsung no longer offers a model with an Intel processor.

With that said, the Celeron 2955U is far from the fastest processor sold today, and the Acer comes equipped with just 2GB of RAM. The limitations of the hardware become obvious in games, which often suffer from framerate issues. The 3D games we tried, Need For Speed World and From Dust, were too choppy to be enjoyable on the Acer. Less demanding 2D games play without any issues, however.

Storage comes in the form of a 32GB SSD and is paired with 100 GB of cloud storage. The drive is quick enough, though the OS has no benchmark which can be used to objectively judge its speed. While a 32GB drive might not seem like much, most Chrome OS apps take up no more than a few hundred MB, and the operating system’s barebones file management discourages storing data locally. Most users will find that the 32GB drive offers more space than they need.

Lugging the Acer around isn’t a problem, as the notebook weighs less than three pounds and is only eight-tenths of an inch thick. The power adapter is small too, and can easily be tucked away in a backpack’s side pocket.

The Acer stands out as the quickest 11.6 inch Chromebook currently sold.

We recorded exactly five hours of endurance in the Peacekeeper web browsing benchmark, which is below what the best Windows notebooks can achieve, but reasonable given this system’s size. For example, the Lenovo ThinkPad X240 on its standard battery returned just three hours and thirty-five minutes. Keep in mind, that Peacekeeper represents constant, heavy web-browsing. Most users will manage better results in the real world.

Our watt-meter indicated that the C720P goes easy on the juice. We recorded only 8 watts of consumption at idle with the display at 100 percent and no more than 22 watts at maximum load. That basically ties the Lenovo ThinkPad X240 and bests most Windows notebooks, though a few, like the HP Spectre 13t, draw up to watt less at idle.

At idle, the Acer C720P Chromebook barely emits a peep, yet we recorded external temperatures no higher than 78 degrees Fahrenheit. That’s just ten degrees above room temperature. Loading the process with YouTube videos and like games didn’t change heat output or fan noise at all.

Gaming was the only task that made the Chromebook sweat. Temperatures increased to 86 degrees and the fan, forced to deal with the strain, emitted up to 42.3 decibels of noise. This is on par with an average Ultrabook; the Lenovo X1 Carbon generated 41.5dB, for example, while the HP EliteBook 820 reached 42.1dB.

Chrome OS is what it is

While Chrome has made a number of incremental improvements over the last year, the basic interface hasn’t changed much since the 2012 update, which introduced a proper desktop and taskbar, and that’s fine. The interface is intuitive and the taskbar, which is similar to what Microsoft introduced with Windows 7, is great.

Though many features require an active Internet connection, Chrome OS isn’t useless when you’re offline. Users can work on documents or edit emails (if they’ve previously saved their Gmail to the notebook) while away from Wi-Fi; changes are synced when a connection is re-established.

Some features are still missing, however. The lack of power management is the most notable annoyance, as users can’t even keep the screen from turning off without downloading a third-party plugin. You’ll also have to deal with the fact that the Windows apps you’re familiar with can’t be used with Chrome OS. Fortunately, the Chrome Web Store offers a robust selection of alternatives.

The Acer C720P Chromebook is a solid laptop. The processor is adequately quick, the keyboard and touchpad hold up under heavy use, and the battery offers plenty of life for a system of this size. Given these traits, it’s easy to see why some consumers are picking Chromebooks instead of Windows-based alternatives.

And this system holds its own when compared to its peers. The HP Chromebook 11 is slightly less expensive, but lacks touch and is a tad slower. Samsung’s ARM-powered Chromebook is much less expensive, but also much slower, and is starting to look its age. Toshiba’s 13-incher is the only serious threat, as it offers the same processor and a larger screen for $20 less, but we haven’t had enough hands-on time with it to issue a verdict.

Still, there’s a problem; the standard Acer C720 Chromebook sells for $199 and, touchscreen aside, is identical to the C720P Chromebook. While touch works alright with Chrome OS, there’s no feature that requires it or is even enhanced by it, so most buyers will be best served by the less expensive C720.

Recommending the less expensive model is a modest criticism, however. Both versions of Acer’s C720 Chromebook are exceptional, and they’re our top choice among the current crop of 11.6 inch Chromebooks.

Topics
All of Samsung’s videos from today’s Galaxy Unpacked event
The Galaxy Book 3 Ultra is Samsung’s most powerful laptop ever
Samsung Galaxy Book 3 Ultra vs. MacBook Pro 16-inch
Best HP laptop deals: HP Envy, HP Spectre x360, and more
New AMD laptop CPU destroys its predecessor, winning by 90%
Lenovo is practically giving away this 2-in-1 Chromebook today
This micro-LED advancement is exactly what AR and VR needs
An AI-generated TV channel is mimicking ’90s sitcoms to nightmarish effect
LastPass vs. 1Password: should you switch?
How to overclock Intel’s Arc GPUs for better performance
I asked AI to recreate the best Super Bowl commercials — to hilarious and horrifying effect
Samsung’s crazy rotating 4K gaming monitor is $700 off today
Best Lenovo Laptop Deals: Save up to $2,287 today