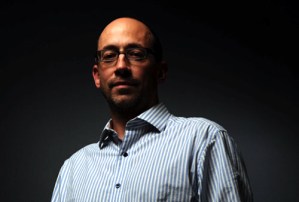 Twitter’s mission is to make it easy to tweet and empower its users. “We believe that when you provide value to your users, that value will be returned to you multifold in ways that you can’t imagine,” said Costolo. The support the company has gotten from some Haiti mobile carriers in the wake of the massive earthquake last year is evidence of this, he claims. Twitter is not just a microblogging service, he argues. It is more like water.

Costolo compared the service to water when describing where he’d like to see it go. Much like we can turn on a tap and know how to use a sink no matter what building we’re in or place we’re at, Twitter should be universally accessible and easy to use across all devices and mediums; it should be everywhere. Currently, the experience is a bit fragmented, he admits.

Twitter is not a “microblogging” service, as some have labeled it, Costolo argues. To make his point, he points back to how the automobile used to be called the “horseless carriage,” arguing that such a name did not define what the car was and would become over time. Calling Twitter a microblogging service negates the fact that it has a highly engaging social element to it, much like Facebook and other social networks, says Costolo.

He admits that many people are using the service to find feeds and not connect, but those who do engage with others get hooked. The social service’s new goal is to shorten the distance between awareness on twitter and engagement on Twitter. The faster people make real connections and actually communicate, the more likely they are to stick with the service and become fans.

Users are always finding new ways to use Twitter. Many people now tweet during major events like the Super Bowl. In 2008, Twitter pulled in about 27 tweets per second during the Super Bowl. This year it had 3,000 tweets per second. This interaction isn’t limited to sporting events either. Many popular TV shows have grown a tweeting community around them, which tweet constantly throughout live broadcasts of new episodes, prompting fans to watch events live so that they can join in on the conversation. Costolo mentioned DVR, seemingly implying that Twitter was reversing trends toward DVRing, though evidence points to the contrary.

Though few details were given, Costolo said that Twitter will soon open a crowdsourcing translation service/tool that will let users translate tweets to new languages that Twitter doesn’t currently support. Russian, Indonesian, and Turkish will be the first three languages supported by the new feature. The company will provide Portuguese translation this year as well.

Twitter CoTweets: Everything you need to know about co-authored tweets

Twitter is experimenting with a change to how profiles appear