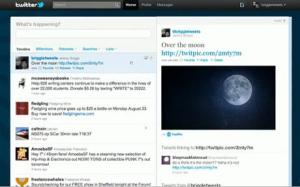 Twitter, the popular microblogging service unveiled a new multimedia-rich home page design that is expected to engage users and keep them on Twitter.com longer. The redesigned site offers an enhanced sidebar that displays images, video, and user profile information without having to leave the news stream. The changes are live today but it may take a few days before the changes are rolled out to all the users.

The newsfeed also had a makeover. The newsfeed is now one endless page. There’s no longer any need to click on “More” to see other tweets. More dramatically, each post can have inline photos. Users no longer have to click on a link to see pictures.

This move makes a lot of sense for Twitter as it tries to attract and retain new users. With a user base of 145 million, almost double what it had earlier this year, the company has plenty of room to grow. The enhanced design is much more interactive than the original, which required users to click away to follow links, see images, or even see information about other users. While an entire ecosystem of third-party apps sprang up to expand functionality, such as TweetDeck, it also allowed almost a quarter of the users to use the service without ever going to the home page.

By capturing the audience on the site, Twitter can work on its ad strategy, such as displaying more contextual and sponsored tweets into your feed while viewing video.

While most users were overwhelmingly supportive of the changes, there were some concerns the service was getting too complicated and too much like Facebook.

“Embedding the media doesn’t make Twitter more complicated. It makes it simpler because you don’t have to open up another link,” said Twitter co-founder Evan Williams.

What is Twitter Blue and is it worth it?
What is Mastodon? Here’s why everyone’s talking about this Twitter alternative
Twitter’s SMS two-factor authentication is having issues. Here’s how to switch methods
How to use Mastodon: create your account, join servers, and more
Best laptop deals: Save on Apple, Dell, HP and Lenovo
Best MacBook deals: Save on MacBook Air and MacBook Pro
Best Dell XPS deals: Save on XPS 13, XPS 15 and XPS 17
This 15-inch Dell laptop is just $250 today, but it’s selling fast
All the products that Apple didn’t announce in 2022
Nvidia may be shooting itself in the foot with its new monster GPU
This killer Black Friday deal on an RTX 3060 gaming laptop is still available
The best Intel processors for 2022
The most innovative laptops of 2022