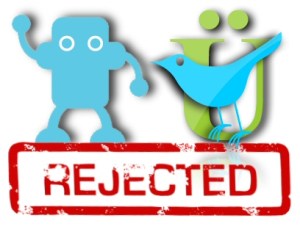 Twitter is experiencing some growing pains. Last week, CEO Dick Costolo spoke at the Mobile World Congress about how dedicated Twitter is to unifying the tweeting experience across all devices. Today, Twitter has begun to fight apps that don’t follow its policies. The social network has suspended three of its major third party apps–Twitdroyd, UberCurrent, and UberTwitter–for violating its use policies. The charge: failing to keep private messages private, exceeding 140 char length limit, violating trademark, and making money off tweets in suspicious ways.

“Today we suspended several applications, including UberTwitter, twidroyd and UberCurrent, which have violated Twitter policies and trademarks in a variety of ways,” spokespersons for Twitter, have told multiple Websites via email. “These violations include, but aren’t limited to, a privacy issue with private Direct Messages longer than 140 characters, trademark infringement, and changing the content of users’ Tweets in order to make money.

UberMedia, a company that has recently been in talks to purchase TweetDeck, owns the three apps. Speaking directly about UberMedia, spokesperson Matt Graves told PC Mag that action had to be taken.

“We’ve had conversations with UberMedia, the developer of these applications, about policy violations since April 2010, when they first launched under the name TweetUp – a term commonly used by Twitter users and a trademark violation,” said Graves.”We continue to be in contact with UberMedia and hope that they will bring the suspended applications into compliance with our policies soon.”

In an interview with TechCrunch, UberMedia CEO Bill Gross said the company plans to fix its apps: “We just talked to Twitter and discussed the various issues they raise. It took us by surprise because they didn’t raise them before. We started making the changes.” The CEO claims that UberMedia’s apps will soon be in compliance and is changing the name of its client from UberTwitter to UberSocial, effective immediately.

UberMedia is in talks to acquire TweetDeck, one of the most popular Twitter clients.

Use our App instead

Twitter also  responded to users reporting issues with the three apps on its support site, pointing them toward its own apps for iOS, Android, and BlackBerry.

In its early days, Twitter has been one of the most supportive platforms for third party applications and clients. However, in the last year, the social network has finally begun to update and expand its own range of services. Now, many of the services that helped it become large are quickly becoming rivals to its own internal efforts to broaden Twitter’s appeal.

Update: Bill Gross has clarified some of the reasons Twitter suspended UberMedia’s apps on Quora.