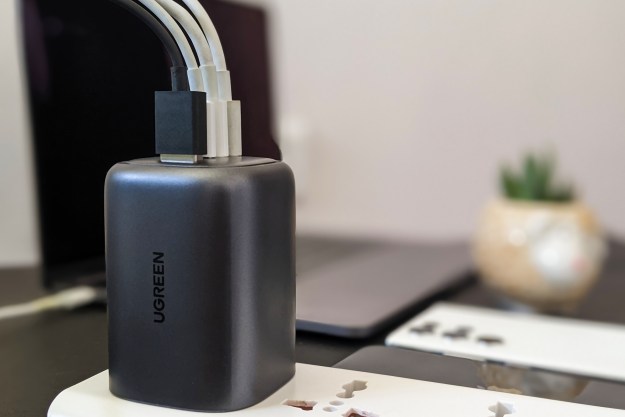 You’re packing for a trip and are forced to take along separate chargers for literally every smartphone, camera, laptop, set of earbuds, and every other smart device you will carry with you. Isn’t that galling? If the answer is yes, then you’ll be interested to hear that on a recent family holiday, I brought along just a single multisocket fast charger — the Ugreen 100W GaN charger — to charge all of our devices while on the trip.

I will explain in this review why a simple Amazon for $62 solves all the woes related to charging, especially when you are traveling.

In today’s technology-dependent world, we are constantly juggling smart devices. Keeping them all juiced up with sufficient battery is as vital as staying up to date on social media. But while we love to enhance every facet of our lives with these devices, charging them remains to be the most painful aspect of owning and relying on them. Some smartphone and laptop brands such as OnePlus and Xiaomi have tried to address this ordeal by launching superfast proprietary charging technologies. In contrast, others like Apple and Samsung utilize non-proprietary standards like USB-PD (Power Delivery) and PPS (Programmable Power Supply) to dispense faster charging on their devices.

Besides the challenge of how quickly we can charge our devices, we face the limitations of how many can we charge at once. The Ugreen 100W GaN charger addresses both of these constraints by allowing four devices to be fast-charged simultaneously. But before delving into the specifics of this capable device, let us explore what a GaN charger is and how it impacts charging.

What is a GaN charger?

Silicon is a semiconductor that is widely used in circuitry for electronic components. Silicon has been used as a semiconductor for over 60 years, and scientists believe they may soon be approaching the theoretical limit of silicon-based chips.

GaN, or gallium nitride, is a more efficient semiconductor used as an alternative to silicon. The energy gap between the valence and the conducting bands on GaN is nearly triple compared to silicon, and this gives it much electric and thermal stability at high voltage and temperatures.

Therefore, for applications with higher voltages and long duration, while silicon tends to offset a lot of heat — leading to wasted energy, GaN is an ideal replacement. GaN is also a better conductor of electricity than silicon at high voltage, which means electric current passes faster through it. These properties make GaN more desirable for chargers.

GaN-based semiconductors require much smaller space to deliver the same power as silicon. This is why a standard silicon chip can be replaced with a GaN chip that is much smaller in size. As a result, GaN chargers are relatively smaller than standard chargers while being more efficient and delivering more power.

Typical GaN chargers can deliver a power output upwards of 100W, while some companies such as Oppo and Xiaomi have even achieved speeds higher than 200W. At MWC 2022, Oppo demonstrated its 240W GaN charger that can charge a 4,500mAh battery to 100% in under 10 minutes.

But despite all its benefits, GaN has one major tradeoff: The manufacturing cost tied to the complex process required to rectify its crystal defects. Therefore, the applications of GaN are limited to accessories such as chargers and have not been applied to the production of smartphones and PCs.

Now that we have a fair understanding of a GaN charger’s advantages, let us focus on the 100W GaN charger from Ugreen. The Ugreen charger has a solid construction. Although the outer shell is made of plastic, it feels exceptionally sturdy.

The Ugreen 100W GaN charger I received has a flat 3-pin plug commonly used in the UK. But the company also sells the same 100W charger with plugs used in the U.S. and Europe. Compared to the models designed for the U.S. and Europe, the U.K. version has rounder edges, but is thicker and marginally heavier. The U.S. variant weighs roughly 235 grams, while the U.K. variant weighs 245 grams. The weight feels comparable to the Apple 61W charger for my MacBook Pro 2020, and considering it replaces four charging bricks, it should only be an advantage when you are lugging it around in a backpack.

Given its use of GaN, the Ugreen charger is reasonably compact and fits easily in the palm. Its heft does make it prone to slipping out of the power outlet, especially if you are using all four ports. This is far less problematic for the U.K. variant since the earthing pin does provide more stability in the socket.

The external shell comes in a dark gray color and feels similar to a brushed aluminum surface in terms of feel. This gives the charger a premium appearance, and it could even succeed in fooling you that it is made of metal and not plastic. Overall, the charger feels robust, and while I would not recommend doing so consciously, it should be able to withstand some moderate falls.

The top two out of the three USB Type-C ports on the charger support charging at 100W — when used individually — while the third one is limited to charging at only 22.5W. The bottom-most port, i.e., the USB Type-A port, is also limited to 22.5W. Although Ugreen endorses a 100W output from the charger, you must remember this only applies if you use the charger to charge just one device at a time.

Charging speeds on each port

Thus, even when you engage all four ports, you can fast-charge at least two devices using this charger. In addition, the 45W output is sufficient to drive a laptop that supports charging via USB — although not to charge it very quickly.

Charging protocols supported by each port

The Ugreen charger supports USB-PD 3.0 and Qualcomm’s Quick Charge 4+ through all three USB Type-C ports. Alongside USB-PD, the charger also supports PPS — a newer standard that allows the charger to manipulate output current and voltage in micro-step, thereby resulting in more efficient use of energy and reduced waste in the form of heat. Support for PPS also means that the Ugreen charger can pump charge into flagship Samsung phones, including the Galaxy S22 Ultra, using any of the three USB Type-C ports.

The wide gamut of supported charging standards means besides your laptops, smartphones, and tablets, you can also charge your smartwatches, headphones, earbuds, wireless keyboards and mice, or handheld such as the Nintendo Switch.

While Ugreen’s case appears compelling on the specs table, real-life performance is what matters. To test the actual caliber of the charger, I tried five different devices with it and noted the charge taken by each device in 30 minutes to establish a level playing field. These devices were left untouched during the charging period to prevent varying workloads from affecting the results.

Here are my observations on the charging performance of the Ugreen:

This swift and versatile is the perfect charger for your MacBook, Dell XPS, or Ultra.

My findings for the charging tests are summed up in the table below:

Are there any downsides?

I have a few minor gripes with the Ugreen GaN charger. First, as I mentioned above, its weight makes it prone to falling out of the power socket, especially when using the U.S. plug variant.

Secondly, when you plug in a new device, the already plugged-in devices will stop charging for a second. This is probably because the charging speeds readjust when multiple ports are engaged. I reckon this might sound like nitpicking and may not bother the majority of the users, but if it weren’t for this, I would probably give this charger a perfect score of five stars.

Lastly, you cannot fast charge phones from brands like OnePlus or Oppo that offer superfast but proprietary charging.

The Ugreen 100W GaN charger is available on Amazon for $62 (including a $6 coupon). You can also buy the U.K. plug for 60 British pounds on Amazon UK (including a 20-pound coupon). Lastly, if you are looking for EU-type plug, you can find it on Amazon Germany for 75 euros (including a 5-euro coupon).

People in Asia can also buy it on AliExpress.

The Ugreen 100W GaN charger is a compact and charming device that can easily replace four of your charging bricks. Besides being a fantastic office or bedside gadget, the Ugreen GaN charger is the definitive solution for travel and will ease your burden of carrying different chargers for different devices. Besides being the perfect charging solution to help you keep your work desk organized, the Ugreen 100W GaN charger is also ideal if you own a phone or laptop that supports non-proprietary fast charging standards such as USB-PD PPS. This is why it is also an excellent charger for your new and shiny Samsung Ultra that does not come with a charger within the box.

If you are looking for slightly more power output while also being able to charge four devices at once, you can consider the Spigen 120W GaN charger on Amazon for $100. However, you will only get two USB Type-C ports alongside two USB Type-A ports and will also have to shell nearly $35 more for the extra power.

If you want a more affordable solution, you can check out the Spigen 100W dual USB-C charger on Amazon for $48. But here, you will only get two ports and both of them will be USB Type-C ports.

There are a few other brands selling superfast GaN chargers rated at 100W or higher on Amazon, and those are relatively more affordable than the Ugreen charger. But we cannot recommend them without testing them ourselves.

How long with it last?

Ugreen tells me that the 100W GaN charger can be plugged in 10,000 times and even contends that this is higher than the industry standard. That many charging cycles means you can easily use it for a decade, and by then, there will be a better technology that will replace it.

The Ugreen GaN charger offers a great value and is an utter no-brainer at this price. If you need a versatile charger to charge up all of your devices all at once without grappling with multiple different chargers, Ugreen’s solution is just about perfect.

Topics
Video-editing app LumaFusion to get a Galaxy Tab S8 launch
WWDC 2022 announcements: iOS 16, iPadOS 16, WatchOS 9, MacOS Ventura, MacBook Air M2, and more
Best Amazon Laptop Deals: Save on Apple, Acer, HP and more
The best alternatives to the MacBook Pro 16-inch
Galaxy Book 2 to come with free curved Odyssey gaming monitor
The best PC power supply for 2023
ChatGPT has a new way to detect its own plagiarism
Samsung Galaxy Book 3 Ultra vs. MacBook Pro 16-inch
The Galaxy Book 3 Ultra is Samsung’s most powerful laptop ever
Nvidia may have another monster GPU in the works, and the price could be outrageous
AMD’s Ryzen 9 7950X3D pricing keeps the pressure on Intel
What is ChatGPT Plus? Everything we know about the premium tier
ChatGPT Plus to bring priority access during peak times — at a hefty price