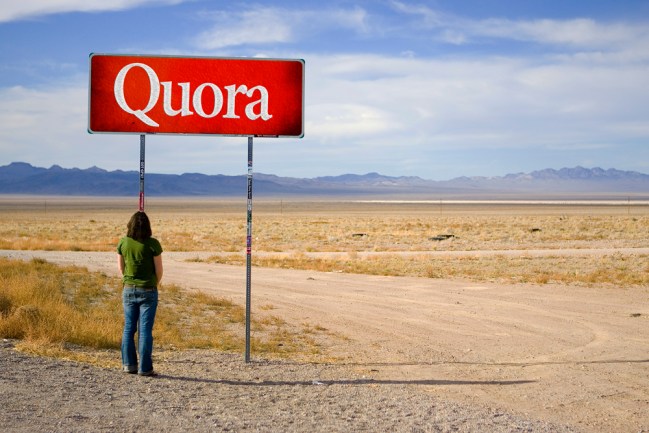 Quora is something of a mystery. For some reason, it’s become an Internet phenom, regarded by industry professionals as many times more legitimate than your run of the mill Q&A sites, but still unpretentious enough to seek out more than purely academic content and personnel. In reality, the site is just a series of questions with a community consensus on answers. So why is it suddenly the apple of Silicon Valley’s eye? We take a look at the enigmatic site, and where it’s going.

A private beta version of Quora was launched in 2009 by founders Adam D’Angelo and Charlie Cheever, both former Facebook execs. Quora is based around the idea that people don’t only want to share information about themselves (a la Facebook), but also want to share knowledge.

Last year, Quora received as much as $11 million from venture firm Benchmark capital and analysts estimate it’s current valuation is approximately $300 million. Now, it’s becoming what Ask Jeeves never had a chance of being: A legitimate, question-answer system with its ear specifically tuned to all things tech and geek related. In an interview with GigaOm, Cheever said he wants Quora to serve as a Wikipedia for all the topics that the open encyclopedia finds unimportant.

Who’s using Quora, and how

Obviously, everyone is able to create an account and use Quora – but some of those users happen to be particularly notable in the digital media industry. AOL founder Steve Case is an active user, and Mark Zuckerberg even has a profile (though he’s only asked five questions and answered none). Bloggers and writers from publications like The Wall Street Journal and Business Insider are consistently contribute to the site – even though how some of them are using it is controversial.

Business Insider writer and longtime industry expert Robert Scoble has been less than shy about his feelings for Quora. He loves it. He’s one of the most active users on the site. Scoble was recently criticized for abusing the site and turning it into his personal soap box (don’t worry, he repented).

Interestingly enough, he was called out by TechCrunch’s Michael Arrington (who, we realize, has a flair for argument), whose own site unabashedly loves Quora and makes no secret of using it as a resource. They aren’t the only ones: Many industry writers and bloggers use Quora for content generation, which, from a certain angle, seems equivalent to a day spent hovering around the tech world water cooler. It raises the question: If the people answering the questions on Quora (which include the likes of Google engineers, Facebook product managers, and App Store developers) are reputable sources, are their answers akin to interviews? There’s been incredibly interesting commentary on everything from Google’s muddled social project to technology’s unicorn, the White iPhone. When a user asked what Dustin Moskovitz thought of The Social Network, Moskovitz himself provided the answer.

But part of Quora’s appeal is that it’s an open forum, and sometimes things can be misconstrued – and motivation isn’t always clear. Companies are more than able to add anonymous intrigue to questions concerning their upcoming products, and scorned employees welcome to provide one-sided narratives.

Really, at its core, Quora is a society of tech and digital enthusiasts who want to talk about the industry and indulge their own curiosities. And its members, founders, and employees are so tremendously protective of it that you either play by Quora’s rules, or you walk yourself over to the wasteland known as Yahoo Answers.

Quora has solidified itself as an attention-worthy startup, and thus the “next Facebook” musings have begun. There’s definitely a social aspect to Quora, but it’s not like the one you find on Facebook or Twitter: It’s more community oriented, more team-building-exercise-esque. There’ve been enough rumblings about how Quora could become social networking’s next golden child – and these are our reasons why it won’t:

Quora’s growing fast — really fast. Quora engineer Albert Sheu recently revealed that the reason the site has been lagging since late December is because of a huge surge of new users. Sheu explained Quora saw “5 to 10 times more activity on the site than usual” on December 28. The registration rate in early January also doubled compared to mere weeks earlier, and it’s not slowing down – last month, the site experienced 150 percent user growth. This is good and bad news for Quora. For obvious reasons, it’s good: The site is being recognized for its merit. Bad, because with the population growth of such a tight-knit community comes growing pains. Quora devotees don’t want to wade through answers from your average Joe who has no background or reason to be believed as a reliable source, and the influx could lead to some of that. It also means that account holders following certain topics could become inundated with copious amounts of alerts notifying them someone has said something about a question they asked or are following — which could be an insightful note, or a link to “an awesome blog you should totally check out!!”

But as long as Quora has no aspirations to become anything remotely like the next Facebook, it will continue to seek and destroy the weeds, and keep the site functional for its loyal users. Its founders and moderators are committed to the site, and hopefully stay comfortable filling the Q&A niche. There’s been a serious lack of dependable Q&A sites, especially those that at least try to verify user identity and enforce honesty, and Quora’s success could be spurring competitors. Equity firm AFCV (a subsidiary of Summit Partners) just bought Answers.com for $127 million, and the company is known for pouring time and money into its tech startup investments.

As far as determined updates go, Quora will be launching a mobile app in the near future, but D’Angelo says there is no revenue model as of yet. “At some point we’re going to put more time into figuring out what it will be. I think there’s a good chance that some component of it might end up being advertising, but we’re going to just try different things and see what works,” he told Bostinnovation.

Any acquisition rumors (a few floating around this year involving Google and AOL were never more than overblown praise from the companies) surrounding Quora should be put to rest for the time being. The site’s still growing and changing, hopefully only for the better. Sure, it can be isolating for newcomers, and maybe its UI isn’t terribly intuitive, but everyone consistently using the site worships it like cult members. The real question is: Can it survive as a secretive society, and avoid user saturation at this point?

Quora is poised between branching out or retreating. But with its growth rate and trending name, we’ll find out very soon if it will stick with its idol-like status or seek out wider appeal.

WhatsApp now lets you control who can see your profile

What is the best time to post on TikTok?