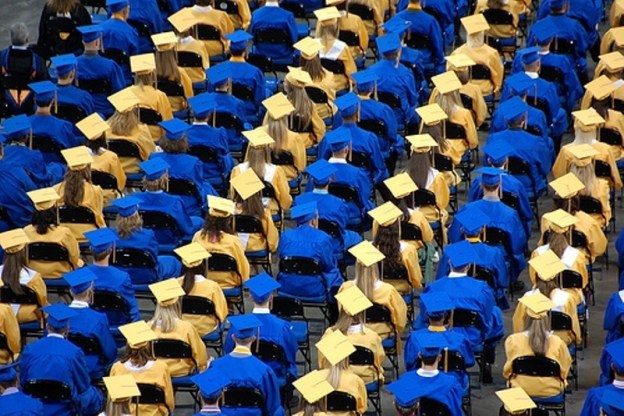 According to Michael Ellsberg, we’ve been lied to. The Education of Millionaires: It’s Not What You Think and It’s Not Too Late author believes that the graduate-high-school-go-to college-graduate-college-get-successful-career arrangement has become so antiquated it’s dangerous.

“Most of our current thoughts about education were formed during our parents’ generation, who went to college in the 50s and 60s. And our economy, America, was invincible: We were a growing economic force with a very stable economy, expanding ranks of middle managers. There was a great need for middle managers and the college system expanded to fit that demand. If you have a B.A., it really set you apart and you could get a cushy management job with benefits and job security.”

But those days are gone—as Ellsberg puts it, “that’s a relic of the past.” Having an undergraduate liberal arts degree is about as unique as having a Facebook profile, and the job market knows it. Not to mention that it is a drastically different economic climate than ever before. “[We live in] a much more chaotic economy where no one knows what’s going to happen next week let alone next year; there are waves of disruptive innovation. And everyone has gone through the same educational system so there are millions of people who have the same credentials,” Ellsberg explains.

“The B.A. is the new high school diploma. To get ahead people are now trying to get a masters or a doctorate. At some point we have to realize the economy has changed and having these degrees to set you apart doesn’t work.”

Near studies also reveal that the U.S. may be facing the problem of having too many college graduates, a situation that has hurt South Korea. The consequence is obviously a mass of unemployed college degree holders, and according to the Economist, South Korea’s tactic has been to discourage students from enrolling in a university.

This discrepancy between graduates and available jobs has become increasingly obvious Stateside as well. The academically-educated, yet unemployed masses turn to minimum wage jobs—or to Occupy Wall Street rallies. “I think that Occupy Wall Street is about every liberal agenda there is, some of which I don’t agree with. I also think that a big part of it is college educated people who are mad that they’ve been sold a lie.”

Those who advocate for a shift in our higher education system also point out these problems come as a reaction to the lack of distinction between the formal and the informal job markets. The formal job market is comprised of jobs filled through traditional channels: By filling out applications, Craigslist responses and the like. The informal job market relies on word of mouth, networking–basically jobs that don’t rely on traditional applications. And studies are showing that informal job placement is booming, and many believe this means we need to begin turning to new avenues to further our careers.

So how do we break the cycle? Ellsberg—and other education innovators—argue that it’s time to start proving ourselves by something other than a degree. Ellsberg says it’s a “portfolio of results” that will set candidates apart from the B.A. carrying herd. “Saying you went to school is not as important as someone Googling your name and seeing you have projects and were involved in different things.”

And there are myriad examples of the non-traditional post-high school course. In an age where every other tech CEO and startup founder dropped out of college and now rakes in millions, it’s hard to argue that a degree is an absolute necessity for success. There is no shortage of examples, and Ellsberg points to WordPress founder Matt Mullenweg.

Originally a University of Houston student, Mullenweg learned PHP on his own time, using online tutorials and programming discussion boards to self-teach. This led to the creation of WordPress, which powers some 27-percent of the Internet.

“You’re being taught by people who in some cases, don’t have real world experience with what’s going on with technology. So many people I’ve talked to say the things they learned and the software they used as freshman were obsolete when they graduated,” Ellsberg says.This has become undeniably true in the tech world. Silicon Valley waits for no one—whether you’re going to Harvard or not. The fast-paced startup scene is built on the influx of new ideas and innovations, and if you don’t get there first someone else will. There should be a healthy fear that if you’re seeking an entrepreneur-based career and you spend four years getting your undergraduate degree, you’re wasting four years of your time and four years’ worth of your money while the digital arena evolves without you.

Projects like PayPal founder Peter Thiels’ 20 Under 20 and Dale Stephens’ UnCollege are preaching the same gospel: That there are alternative routes to securing a comfortable future.

“The opportunity cost of going to class became too high,” Stephens says. Stephens, who didn’t attend middle school or high school, was quickly frustrated by the college system and decided to drop out of Hendrix College to go his own route when it came to furthering his education.

Of course, when you’re in a tech-based or creative industry, this sort of restructuring is more natural. “In those professions you can judge the merit of someone’s work very quickly without a college degree as a proxy,” he explains. “In a world where you can push code every hour and new iterations happen daily, the opportunity cost [of college] is higher.”

But the notion isn’t without controversy. Ellsberg has been accused of being anti-college and spreading a dangerous message of uneducation—and one of his opponents is none other than the current president of Brown University, his alma mater. “The number one thing they hurl at me is that college graduates earn more than dropouts, which is true. However what those statistics don’t show is that most ambitious, intelligent people go to college. It doesn’t take into account the fact that people who graduate college are motivated, ambitious, and hard-working enough to finish college—they’d get jobs no matter what,” he says.

Ellsberg stresses that this new way of approaching education obviously doesn’t apply to certain sectors. Doctors and lawyers and accountants still need a formal education to become doctors and lawyers and accountants. But for the rest of us who see college as four years to figure it out, he and many others are beginning to believe that the cost—both financially and opportunistically—has become too high.

“Graduating with $23,000 in debt, which is what the average student has at graduation now, is going to severely limit your choices,” he says. “It will hamper whether you decide to start a business. You are pretty much tied to getting a job with the most hours per week so you can pay off your loans. And if you get out of college without a lot of debt, you’re still spending four years of your life learning about things that are not very relevant if you want to go into the tech business.”

When talking about such deep-rooted, societal change, it’s crucial not to idealize the situation—i.e., not everyone is going to be the next Mark Zuckerberg. If anything, pop culture has subtly begun to glorify the brilliant, techie, dropout meme by elevating Sean Parker to new fame and in movies like The Social Network. There’s some hero worship going on with these Internet idols, and it can be misleading. So let the numbers convince you otherwise.

“There’s somewhere around 1,000 billionaires in the world. So if you go out thinking you’re going to make an iPhone app and become a billionaire, you’re delusional,” as Ellsberg puts it. “Be inspired by Steve Jobs, Mark Zuckerberg, Sean Parker—but pinning your hopes on becoming the next Mark Zuckerberg is delusional. The chances are so low.”

That isn’t mean to be discouraging: “There’s a lot of room between flipping burgers and becoming a billionaire rock star entrepreneur,” he says.

Stephens echoes this outlook. “I think there’s certainly a paradigm belief that your options for dropping out of college are either you become Mark Zuckerberg or you move back in with your parents smoke pot and play video games for the rest of your life,” he says, something he and various others are proving untrue.

Of course, there’s always the third option, as Stephens points out. “If you want to go back to school, school is always going to be there.”