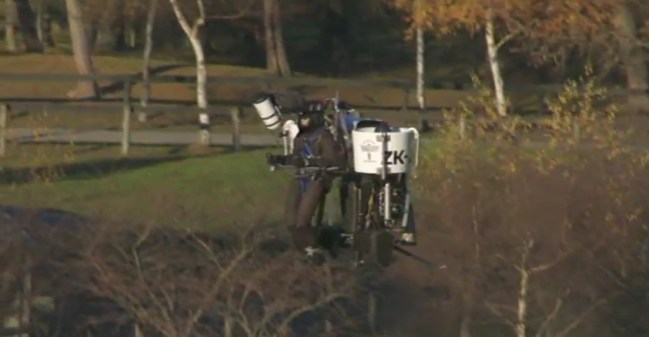 James Bond got his first jetpack in 1965. It’s been half a century, but it looks like the rest of us might finally get our chance to fly. On May 21, the Martin Aircraft Company successfully piloted its latest prototype jetpack to an altitude of 5,000 feet (1,500 meters) for nearly 10 minutes above Canterbury, New Zealand, achieving a climb rate of 800 feet per minute (4 meters per second). The feat is all the more impressive considering their previous test jetpacks never flew higher than 50 feet.

Martin is hoping to commercialize his new jetpack, which comes with a feature jetpacks have needed for years: a parachute. Strapping yourself to a rocket and blasting into the sky has always looked fun, but its dangers are fairly obvious. If the engine cuts out, you would fall like a rock. Martin hopes to change this when he sells his flying machine for a cool $100,000.

This flight comes only weeks after another daredevil who calls himself the ‘Jetman’ successfully flew his own winged jetpack through the Grand Canyon. However, while he flew for some time, that particular jetpack needs to be released from a plane or helicopter to operate. Martin may have a leg up (literally), as his jetpack is capable of lifting off and landing on its own.

The Back to the Future movies imagined that we’d already have flying cars by now. We still don’t, but if you have $100K saved up, you may not need one.

As lavish as ever, Dubai’s Fire Service might soon use jetpacks to fight fires