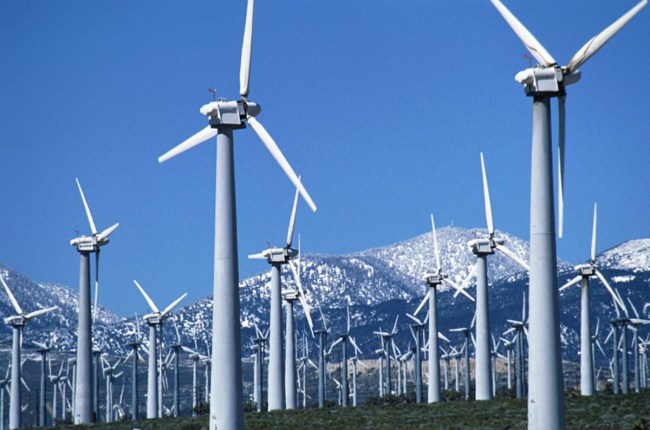 Hopefully this news isn’t a big shock to anyone, but fossil fuels–which currently make up 80-percent of all the world’s energy supply—are running out, and at the current rate of consumption, the world will hit a cataclysmic energy crisis within most of our lifetimes. When that happens, the world will quickly fall apart, wars will be fought over the smallest surpluses, our technology will be pushed back centuries, dogs and cats will live together, etc., etc. In short, it would be bad. Very very bad.

But that doesn’t mean we should all begin stocking up on our ammo and sharpening our knives just yet. The grim future predicted by many, where even starting a gas guzzling V8 car would be ruinous to all but the richest people in the world, can be avoided, or at the very least slowed significantly.

A new study published in the Energy Policy Journal and recounted by Physorg.com, claims that with a concerted global effort, all energy could come from affordable and 100-percent renewable energy sources by the year 2030. We would also be able to continue to provide renewable and low pollution energy indefinitely.

So why aren’t the governments of the world lining up to be the first to stamp an “Energy Saver” sticker on their charters? The sad answer is, of course, money.

The study in question was written by Mark Delucchi from the Institute for Transportation Studies at the University of California, and Mark Jacobson from the Department of Civil Environmental Engineering at Stanford University. The duo created a mathematical formula that calculated the decline in costs associated with renewable energy, and proceeded to find an equation that would show how long it would take for those technologies to become cost effective to the point that they would be able to practically and affordably replace all forms of energy production in the world.

The study itself focused on wind, solar, wave and geothermal sources only, then determined how long it would take to replace the current sources of energy, including the 80-percent of the world’s energy that is reliant on fossil fuel, the 6-percent that uses nuclear energy, and the much smaller percentage that relies on biomass, which is currently the world’s most widely used renewable energy source—biomass was excluded from the study due to the pollution it causes.

To accomplish the bait and switch with our current sources of energy development, it would require nearly 4 million 5-megawatt wind turbines, 1.7 billion 3-kilowatt roof-mounted solar photovoltiaic systems, and nearly 90,000 300-megawatt solar power plants. On paper it is an obvious conclusion to the one fear that every nation in the world–rich or poor, strong or powerful—shares.

But here is the rub: first, the wind turbines required have only recently been introduced, making them extremely expensive prototypes that are also time consuming to build without several manufacturing plants specifically being redesigned to create them. The majority of turbines in use today are 2 to 3 times less powerful than those required by the study’s results, and only a handful of 5-megawatt turbines exist in the world. The first of these turbines is less than four years old.

The solar panels would also be an issue. The solar plants the study recommends would need to use a mix of what are called photovoltaic panels, that combine with concentrated solar plants, to boil water in order to drive generators. There are only a handful of these types of solar plants around today, and they are still expensive, almost prohibitively so. The plan would also require solar panels to be used as part of housing construction, with the panels placed on top of each newly constructed house, which creates a new series of logistic hurdles for builders not to mention the cost increase that would be associated with building and/retro fitting houses. With the housing market still suffering from the recession, it is not a good time to massively increase the costs.

But assuming all of those issues can be overcome, the majority of the components are readily available, with the exception of the mineral neodymium. Even that could be overcome with a five time increase in the size of the mining operations, as well as increased recycling. According to the scientists responsible for the study, the major hurdle would be the necessary increase in particular pieces needed to develop the devices that convert the power. If the necessary manufacturing plants can be built, and the resources are made available specifically for these devices, by 2030 the world could be using 100-percent renewable and inexhaustible energy.

But while the ability to construct the necessary generators and solar panels might be within our grasp, there are a few things to consider that the study fails to tackle. For this idea to succeed, it would need the combined efforts of the majority of the world to work together in order to mine and manufacture the materials needed, split the production around the world to those best prepared for it, and generate enough power throughout the surrounding areas to help overcome the differences in nation sizes—even if a small state like Luxembourg was willing to contribute, the physical size of the country would mean that it would be reliant on the wind turbines in fields across Europe, as well as the rivers throughout the continent. While a country in the EU might not have a major problem with that, it presents several problems elsewhere around the world where conflicts arise.

But putting that aside, and assuming that it somehow became logistically possible to create the amount of energy needed throughout an entire region, there are still the other factors. Namely the financial and political ones.

The survey based the energy figures on the idea that it would be affordable energy. We may have the technology to be able to create renewable and reusable energy to replace all energy consumption today, but if the cost would be ruinous. In order to begin construction, it would take an act of Congress, and similar governmental approvals around the world to help provide subsidies. That is of course assuming that the country was wealthy enough to provide the subsidies, even if it wanted to. But at the risk of sounding unduly cynical, the forces that control the oil lobbies in Congress, as well as the major oil companies themselves, would probably not look favorably on a proposal that would effectively run them out of business in 20 years. Never underestimate the power of self-interest, even when put up against that good of all humanity.

For this plan to work, it would take a drastic event in the world, or the oil companies themselves to be at the vanguard of this movement. It is a sad truth, but with the power and influence the big oil companies of the world wield, creating a new world order that effectively cuts them out could lead to a disastrous fight that nobody wins.

So even though this project may die a horrible death at the hands of governments around the world, it does give us hope that the apocalyptic predictions of humanity falling into a new Dark Age when all the TVs stop working might be avoided.  Already America is doing our part, and our consumption of gasoline is decreasing, and should never increase again. So high-five, America!  Sure, we are still the biggest user of oil by far, and sure we have been for decades, but that is besides the point…

The technology is there to jump start the next age of civilization.  Pollution would be almost a non-issue, the resources needed would never run out, and the energy needed to continue our societies would be abundant.  All we need now is the will to undertake the world changing event. Maybe one day.

The future of manufacturing: A look ahead to the next era of making things