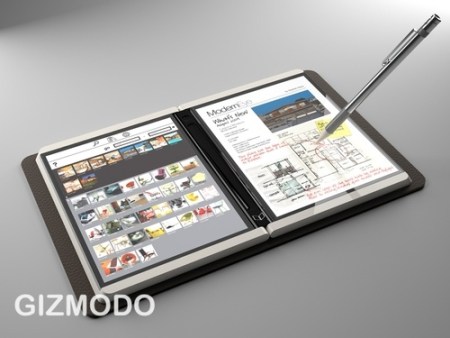 According to The New York Times, Microsoft Chief Executive Steve Ballmer will introduce a tablet-like device—dare we say ‘slate’—during his keynote speech at the Consumer Electronics Show in Las Vegas tomorrow.  The rumored hardware will supposedly be made by HP and is expected to be available for sale by mid 2010. Spokespeople from Microsoft and H.P. declined to comment on the product or the content of Mr. Ballmer’s speech.

There have been rumors and even mock photos of a Microsoft/HP tablet prototype device circulating for the past few months. Last September Gizmodo reported on a Microsoft mockup tablet (yep, that one in the picture), but like most non-Apple tablet stories of that time everyone shrugged it off and continued searching for iSlate news.

The New York Times reported that unnamed sources said that Mr. Ballmer will “show the as yet unnamed H.P. device” and the product will be a multi-media whiz with e-reader and multi-touch functions. We hope this big-name tablet rumor is true—if it’s not then we give up, and we’ll take a break from reporting on fictional tablets.

Awesome Tech You Can’t Buy Yet: Ultrafast toothbrushes and a laptop/phone hybrid

The United States has a colossal e-waste problem. This is why