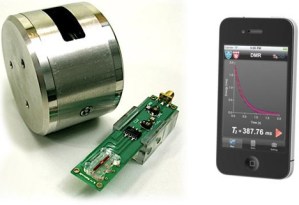 One-hour cancer detection in a handheld device and tiny robots doing all of the work. Is that science fiction or what? It is fiction made real today, with the news that a joint research team from Harvard University and the Massachusetts Institute of Technology has developed a handheld scanner that can accurately detect the presence of cancer cells in a patient more accurately than biopsies and other traditional methods can and more quickly.

Also, it’s cheaper. The telephone-sized device only costs around $200 to build.

The microNMR (nuclear magnetic resonance) system requires only a small amount of tissue, drawn with a simple needle, to produce results, the team reports in Science Magazine. The scan takes roughly an hour to complete and the micro-NMR has a 96 percent success rate, which is a considerable improvement over currently available methods. The cost-effective device itself can connect with a range of laptops and mobile monitoring-equipped devices, eliminating the need for overly expensive peripheral equipment.

Study co-author Cesar Castro told Mercury News in an interview, “We have harnessed the power of nanotechnology to get real-time assessments.” The technique uses antibodies and magnetic particles to locate and mark cancer-stricken cells. “Not only can it be used for diagnosis, but it will also allow us to see how the tumor is responding to therapy,” Castro added.

While there is still work to be done before the device is approved and adopted for regular use, the results have been promising. The first full-scale clinical study detected 44 cases of cancer among a group of 70 patients, including some for whom traditional detection methods had previously found nothing.

The best health and fitness gadgets

Neuroscience’s superstar explains how A.I. is weak, why we dream, and more