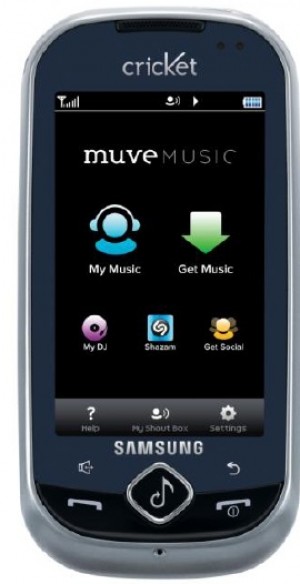 Ten years ago, if anyone predicted that a cell phone would be capable of downloading, playing, and purchasing a full library worth of music, they would have been laughed at. Those people who were laughed at would then probably have invested in streaming music technology, and patiently waited until they inevitably became millionaires, then returned to crush their enemies. In short, the idea of steaming, storing, and selling music to mobile devices is not just the wave of the future, it is the wave of the now, and Cricket mobile phone carrier has decided to join the fray.

Cricket is known primarily for phones that can be purchased by anyone, and paid for monthly without a contract. They are economical phones, which tend to be overlooked by people hungry for the next new “big thing”. That might soon change.

Today at CES, Cricket debuted the Muve Music service, a new feature that will be offered on the new Samsung Suede phone. Users of the service will pay just $55 a month for the standard Cricket phone service with all the regular bells and whistles including unlimited voice calling, text messaging and data plans, but now it will also include a massive library of music, as well as ringtones.

Originally announced on December 20, the new phones were displayed today at CES. Each phone will include access to massive library that includes music from Universal Music Group, Sony Music Entertainment, Warner Music Group and EMI Music. Users will be able to download then stream unlimited music directly to their phone as part of the plan.

The service will begin this January, and the Samsung Suede phone will cost $199.