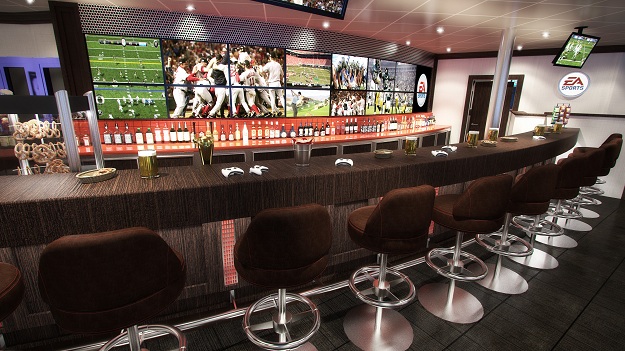 With more people playing videogames today than ever before, Carnival Cruise Line is making sure gamers on vacation, don’t have to take a vacation from gaming. As part of its $500 million Funship 2.0 initiative to upgrade its entire fleet, Carnival has partnered with EA Sports to integrate and introduce EA Sports Bars in each of its ships.

“We’ve always had sports and gaming on board our ships, but we never really felt that we were optimizing it,” said John Heald, senior cruise director and brand ambassador for Carnival Cruise Lines. “So we went to the world leader in gaming, EA Sports, and we branded the two companies together. Carnival and EA now have a partnership and it’s been a tremendous success with the EA Sports Bar.”

The centerpiece of the EA Sports Bar, which will have an authentic sports-themed interior, is a massive video wall comprised of 16 individual 46-inch flat-screen televisions. The bar has been designed to immerse guests in sports — both watching live events and playing EA Sports games. The screens are programmable and can be configured in a variety of ways to simultaneously display live sports broadcasts, as well as video game competition. There are also two separate wall-mounted screens specifically for video games that allow for more private play.

Chris Erb, vice president of brand marketing at EA Sports, said this latest partnership is part of a bigger initiative of finding new ways to connect with consumers.

“This is something that we’ve been doing both digitally and in the real world through our marketing as we focus on how we can put controllers in people’s hands and provide good experiences,” said Erb. “The EA Sports brand becomes like a lifestyle. You can play our games 365 days a year, 24/7.”

The average age of an EA Sports gamer is 27 years old, which fits right in the wheelhouse of Carnival’s passengers.

“You’re a captured consumer on a ship and we thought the best sports experience that you can have is just a place where you can go and escape, hang out, drink beer, play videogames, watch sports, and even bring your laptop and plug in your Wi-Fi,” said Erb. “EA Sports Bars are about having a really good experience, courtesy of EA Sports, on these ships.”

In addition to providing games via satellite, each EA Sports Bar features a live sports ticker that runs non-stop, and there are also authentic stadium noise effects to add to the atmosphere. There will also be regular programming in the bar including sports trivia, videogame tournaments with EA Sports-branded prizes, and other activities hosted by an emcee.

“We have three basic tournaments at the EA Sports Bar,” explained Heald. “We have one for the children, one for the adults, and then we have the most popular one, which is dad and son or dad and daughter versus another dad and son or dad and daughter. This offers a lot of variations of tournaments that get families involved. And it’s all controlled on an iPad. What surprised me was that on the Liberty the most popular games have been FIFA, not Madden. I didn’t know Americans knew how to play that, but they’re all playing the soccer videogames and it was fantastic.”

The Carnival Liberty is the first ship to get the complete overhaul, which includes the EA Sports Bar, as well as a new restaurant from Food Network star Guy Fieri and a comedy club designed by George Lopez. Through 2015, 16 of Carnival’s ships will be overhauled to incorporate these new features.

The brand new Carnival Magic, which will receive an EA Sports Bar in 2014, does have an EA Sports Stadium built into its upper deck. This outdoor area includes a large screen TV that will be used to show sports programming and offer videogame tournaments throughout the cruise.

“The EA Sports partnership goes beyond playing videogames,” said Heald. “We worked with Andrew Anthony, the voice of EA Sports’ ‘It’s in the game’ to record some very special announcements throughout the cruise experience. He’ll promote not only the EA Sports Bar, but also other restaurants and activities on board the ship. We launched this on the Liberty and passengers have loved it.”

Erb said the EA Sports Bars will also be used to give passengers advanced looks at new games, in addition to access to top franchises like Madden, FIFA, PGA, Fight Night and NCAA Football.

“I don’t think our main consumer that’s on these ships are going to be our core audience too much, so we’ll be able to use this partnership to introduce new games,” said Erb. “When SSX ships in the beginning of next year, not all consumers are going to get a chance to see that right away. I think these ships will make a good way of connecting with them. We’ll continue to update games so the ships always have fresh titles.”

Throughout the course of each year, EA Sports will highlight specific games as the real-world sports take center stage. When the PGA TOUR heats up, the Tiger Woods game will take center stage. With the start of college football, NCAA Football will kick off, etc.

“As soon as new games drop, all of the boats will be updated so we can start using it both as a marketing forum to let people see what’s new and different that’s out there from us, as well as to give passengers really cool experiences,” said Erb.

Now gamers can keep up on sports and sports games in between cruise activities like tanning at the beach, snorkeling in the Caribbean, and playing basketball on deck.