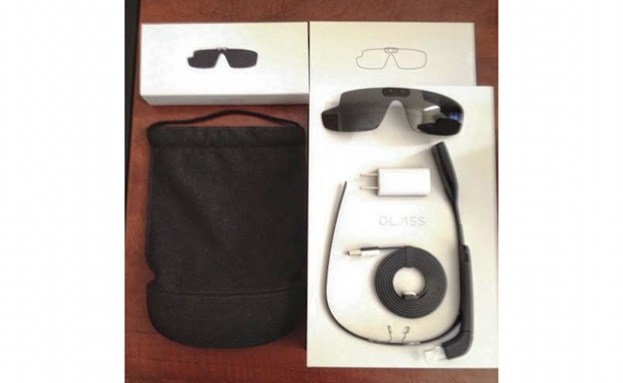 True to its word, Google has started sending out the Explorer edition of Glass to the developers who registered an interest in the high-tech eyewear at Google’s I/O event last year.

Photos and videos from the recipients are beginning to appear on the Web, with the simple packaging suggesting Google has taken some cues from another Silicon Valley company more famous for its phones and tablets than any futuristic head-based gear.

Inside the box you’ll find a microUSB cable and charger, a carrying pouch, attachable shades, a clear visor, and, of course, Glass.

One of the first videos (below) to hit the Web shows San Jose resident Matt Abdou tearing around a go-cart track, filming the experience using Glass. The 720p footage is certainly crisp and clear, though some stabilization software would’ve ensured a smoother ride for viewers.

Matt has to adjust the glasses several time during his high-speed ride, presumably because they were slipping off his head. While I wouldn’t have wished to see any harm come to his newly acquired gadget – a gadget for which he had to hand over $1500 – a through-the-Glass video of the futuristic specs tumbling across the track would certainly have given us an opportunity to make a judgment on the robustness of the device. The video probably would’ve looked pretty cool, too.

On Tuesday, Google released a spec sheet for Glass, revealing that its new gadget incorporates a 5-megapixel camera and 16GB of memory (12GB usable), and comes with Wi-Fi and Bluetooth connectivity.

Over the coming months, Google will be hoping to get some useful feedback from the several thousand developers set to receive Glass, with the Mountain View company thought to be working towards a commercial release of its tech at the end of this year or in early 2014.

Topics
Video-editing app LumaFusion to get a Galaxy Tab S8 launch
This Jackary solar generator is a steal at $210 for Prime Day
Best Prime Day Drone Deals 2022: What to expect this week
Implantable payment chips: The future, or cyberpunk pipe dream?
Finishing touch: How scientists are giving robots humanlike tactile senses
K-pop NFTs are here, but I’m not convinced they’re worth it
Solving VR’s ‘infinite walking’ problem with moon boots
Fighting football injuries with 3D-printed, hyper-personalized pads
Inside the U.K. lab that connects brains to quantum computers
ClipDart is an on-demand barber app aimed at people of color
How 5G is changing journalism
Why the moon needs a space traffic control system
10 female inventors who changed the world forever