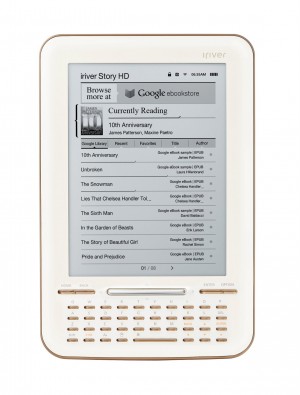 As if there weren’t enough e-readers to choose from, iriver has cast yet another in the mix with the iriver Story HD — but this one has something unique going for it. As Google confirmed on Monday, it will be the first dedicated e-reader with Google eBooks integrated right out of the box. The  The Wi-Fi only, Kindle look-alike will be available starting July 17 at Target for $139.99. Like the Kindle, the Story HD has a QWERTY keyboard and E-Ink display, but comes in a white and gold color scheme.

Google began its digital library platform in December to make titles available to desktops and handsets, and now they can be accessed via their traditional home, the e-reader. At opening, the Google eBookstore provided 3 million titles, and now says it offers 3 million for free and hundreds of thousands for sale. Of course, since the Google eBookstore is an open platform, users with a Sony e-reader or a Nook can access its content, but only by downloading books through a PC then transferring them. The iriver Story HD will be the first dedicated e-reader to allow users to browse and make purchases and downloads through an interface on the device.

The Story HD may have the Google brand and digital bookstore behind it, but its main competition in this market, the Kindle and the Nook, have become synonymous with e-reader. The two best-selling e-readers both have 3G capability as well as much more established names. If the Story HD were more affordable than these two products, we’d say that could work in its favor, but it costs the same as the Kindle 3 and Nook Simple Touch. What does set the Story HD apart from its competitors is its high-resolution screen: 1024 x 768 pixels. Most e-readers in its class are a measly 800 x 600.

Google may have partnered with iriver for the first devices to support Google eBooks natively, but a note at the bottom of Google’s announcement (and an invitation for interested manufacturers to reach out) hints that more are to come.