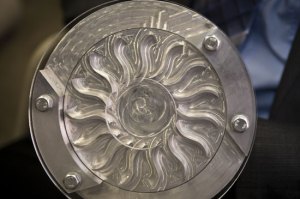 Researchers at Michigan State University have developed a prototype of an entirely new type of engine that is partially powered by shock waves, which some in the auto industry believe could greatly reduce the fuel consumption of hybrid vehicles, reports New Scientist.

So far, the auto industry has struggled to fine energy efficient and cost effective ways to re-tool the fuel-hungry internal combustion engine, which has been widely used since the late 19th century. This new engine works in an entirely different fashion.

The prototype engine, called a Wave Disk Generator, requires very few parts to run. Unlike internal combustion engines found in cars today, the Wave Disk Generator doesn’t need a transmission, radiator, pistons, valves or any number of other parts found on a traditional engine. This makes the new type of engine far lighter and smaller than a traditional engine, which further allows for less fuel consumption.

A Wave Disk Generator is basically just a metal disk with channels cut into it. When the disk spins, air and fuel mix together in the chambers. The mixture is compressed into the center, unable to escape due to the position of intake and exhaust ports. It is then ignited, and the exhaust is pushed through the outlet port. The backward thrust of the exhaust pushes against the ridges of the disk, which causes it to spin. This, in turn, creates electricity.

Experts say a car fitted with the Wave Disk Generator engine would be roughly 20 percent lighter than the same car with a standard engine, and is also 3.5 times more efficient. The engine can run on a wide variety of fuels, from gasoline to hydrogen, and is said to potentially reduce auto emission by up to 90 percent compared to a standard combustion engine.  A 25-kilowatt version of the engine is expected to be ready later this year.

Watch a video about the Wave Disk Generator: