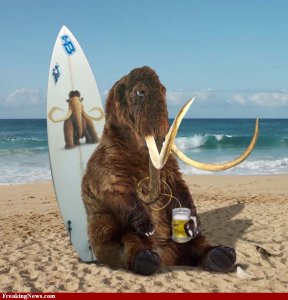 Finding a fully intact frozen woolly mammoth isn’t enough, it seems. Now, a professor at Kyoto University in Japan is planning to bring the species back from extinction through cloning, reports the AFP. Dr. Akira Iritani plans to insert the nuclei of mammoth cells into a modern elephant’s egg cell, creating a woolly mammoth embryo that will be brought to term by an elephant mother. The elephant was chosen because it is the nearest modern relative to the mammoth. Woolly mammoths died out during the last ice age, more than 5,000 years ago. Iritani thinks he can resurrect one in five years.

The key is soft tissue. Unlike older extinct species like the dinosaur family, scientists have been able to dig up entire frozen mammoth carcasses in Siberia, most of which still have soft tissue with cells containing DNA. The key breakthrough is a new technique that allows the scientists to extract DNA from frozen cells. Previously, frozen cells were thought to be too damaged (by the freezing process) to use for things like cloning.

“If a cloned embryo can be created, we need to discuss, before transplanting it into the womb, how to breed (the mammoth) and whether to display it to the public,” Iritani said. “After the mammoth is born, we will examine its ecology and genes to study why the species became extinct and other factors.”

There is debate among the science community how exactly mammoths went extinct. Some believe that humans hunted the creatures to extinction while others believe that climate change did the furry elephants in. Let’s just hope that all of these scientists give Jurassic Park a watch before they start completing the mammoth genetic codes with frog DNA.

Would you pay to see a living woolly mammoth?

UPDATE 4/15/2011: LiveScience has a video that explains Iritani’s plans.

Three things the Microsoft Surface Duo 2 needs to succeed
Why are so few people actually using 5G in the U.S.? Here’s what the experts say
5G-enabled billboard in Times Square briefly brings interactive game to masses
Sustainable with Google 2021: Nest Renew, traffic light efficiency, and more
The 20 most outrageous and fantastic James Bond gadgets of all time
AirPods 3 could finally debut at Apple’s Unleashed event on October 18
Scientists think the next big solar storm could create an ‘internet apocalypse’
Need a last-minute Halloween costume? Check out these 3D-printable getups
Siduri Wines blends wine and tech in the ultimate sweepstakes experience
The funny formula: Why machine-generated humor is the holy grail of A.I.
How far away are we from mainstream 5G home internet?
Two years and a pandemic later, fast-charging graphene batteries are hitting shelves
The best portable power stations