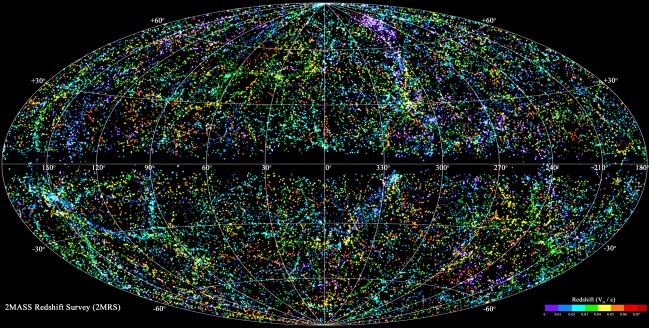 If you’d like to see what 10 years of hard work looks like, we’ve got it right here. For a decade, a group of astronomers has worked to complete what you see here, a screenshot of the 2MASS Redshift Survey (2MRS), which attempts to map out our entire known galaxy in 3D space. Extending to a distance of 380 million light-years, this new study uses infrared technology and ‘redshifts’ to determine the distance of more than 43,000 galaxies, covering 95 percent of our sky. The only thing we can’t yet see are the galaxies hidden behind our own Milky Way galaxy, which blocks our view. The black band in the middle of the above image represents everything currently blocked by the Milky Way.

To get this 3D image of the universe, a team led by John Huchra spent the last decade taking a detailed 2D view of the universe, called the “Two-Micron All-Sky Survey” (2MASS), and mapping all of the galaxies out in 3D space by scanning the entire sky in three near-infrared wavelength bands. According to the Harvard-Smithsonian release, “near-infrared light penetrates intervening dust better than visible light, allowing astronomers to see more of the sky.”

Sadly, Huchra did not live to see his work completed. The final observations were finished shortly after Huchra’s death in October 2010.

Still, for the Star Trek geeks out there, keep this in mind. In all of Star Trek, humanity never finishes exploring even a quarter of our own galaxy (the alpha quadrant). One can only imagine how much there is to see and how many strange and new things exist in 43,000 of them.