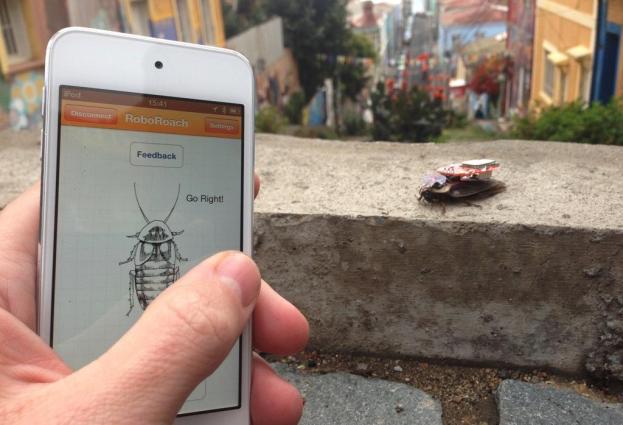 If the thought of a cockroach scuttling around on the floor is enough to make the hair on the back of your neck stand on end, then you’d better steer clear of this week’s TEDGlobal conference taking place in Edinburgh, Scotland.

Then again, what neuroscientist Greg Gage has up his sleeve (not a cockroach, by the way) may intrigue you to such a degree that you might actually be able to stand the sight of that pesky little critter trotting about.

The thing is, Gage will be controlling the insect with a smartphone. If only it were that simple with all cockroaches, then we could just steer them straight into the yard and up the street, never to be seen again.

The theme of the Edinburgh conference, which kicked off in the Scottish capital on Monday, is ‘think again’, with Gage set to take to the stage with his so-called RoboRoach on Wednesday.

Gage told the BBC that during his presentation he plans to attach a small electronic backpack to his pet roach “under anesthetic” (that’s the roach, not Gage), a backpack that apparently “communicates directly with the neurons in the cockroach’s antenna.”

The neurons communicate information to the roach’s brain using electricity, enabling Gage to control the movements of the ‘cockroach cyborg’ with a smartphone or some such device.

But before you begin to wonder if Gage is one whisker short of a full beard, best to hear him out.

“This is not just a gimmick,” he told the BBC. “The technique is the same as that used to treat Parkinson’s disease and in cochlear implants. The point of the project is to create a tool to learn about how our brain works.” On the TED website Gage says he wants to “show how brains receive and deliver electric impulses.”

When asked about the ethics of using a cockroach in this way, Gage said he was “pretty certain” that the insect felt no pain during the procedure, adding, “They still have free will because they adapt very quickly and ignore the stimulation.”

Gage is part of a startup of scientists and engineers working to change the way neuroscience is taught in schools and colleges. The team, called Backyard Brains, has begun a Kickstarter campaign to help fund the development of a RoboRoach kit, complete with backpacks, batteries, electrodes and, if you don’t fancy looking under your refrigerator for one yourself, cockroaches (optional). If you’d like to get your hands on the $100 kit at the earliest available opportunity (go on, you know you want one), you can pre-order it here.

Gage said that one in five people will have a neurological disorder in their lives for which there is often no cure. “Getting kids interested in neuroscience is important,” he said.