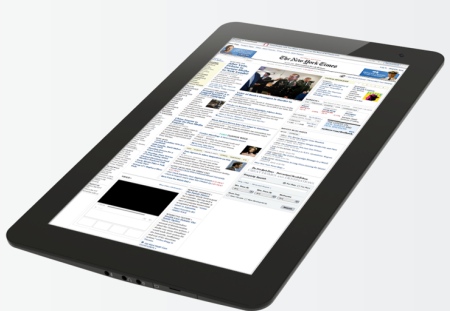 Remember that little dispute over the CrunchPad aka the JooJoo Tablet? Well, it looks like Fusion Garage came out on top in that one—sort of. Fusion Garage announced that the JooJoo tablet is now in full production, with shipments of the new reaching customers by the end of February.  Preorders for the 12.1-inch touchscreened JooJoo tablet are starting at $499—same price point as Apple’s iPad.

“This is [a] landscape changing manufacturing agreement in the CE hardware market in much the same way Dell changed the PC business model with its direct to consumer sales approach back in the 1990s,” said Fusion Garage founder and chief executive, Chandrasekar (Chandra) Rathakrishnan, in a statement. “CSL’s confidence in JooJoo and strategic investment enables us to concentrate on the expansion of our organization, software development and, ultimately, building a world class CE company.”

We doubt preorders for the JooJoo will be as bountiful as they will be for the iPad.

Finishing touch: How scientists are giving robots humanlike tactile senses
The best Bluetooth trackers for 2022
Analog A.I.? It sounds crazy, but it might be the future
How 5G is changing journalism
Three things the Microsoft Surface Duo 2 needs to succeed
Why are so few people actually using 5G in the U.S.? Here’s what the experts say
5G-enabled billboard in Times Square briefly brings interactive game to masses
Sustainable with Google 2021: Nest Renew, traffic light efficiency, and more
The 20 most outrageous and fantastic James Bond gadgets of all time
AirPods 3 could finally debut at Apple’s Unleashed event on October 18
Scientists think the next big solar storm could create an ‘internet apocalypse’
Need a last-minute Halloween costume? Check out these 3D-printable getups
Siduri Wines blends wine and tech in the ultimate sweepstakes experience