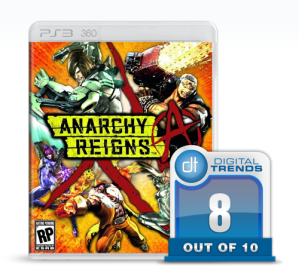 Anarchy Reigns is the latest title from developer Platinum Games, a company perhaps most famous for creating the excellent Bayonetta. As with that game, Anarchy Reigns is designed around cinematic, stylized fisticuffs, but unlike Bayonetta, Platinum’s latest is focused heavily on its multiplayer component. In fact, Anarchy Reigns is something of a hybrid of traditional fighting games. Streets of Rage-style beat ’em up titles meets online shooters like Unreal Tournament. The closest analogue one could use to describe Anarchy Reigns would be Capcom’s underappreciated Power Stone series, though thanks to Platinum’s over-the-top design sensibilities, Anarchy Reigns is a far more bombastic experience.

Anarchy Reigns is Platinum Games’ most ambitious game to date. The developer is attempting to meld a handful of genres into a single release, while infusing the whole thing with quirky fighters, a surprisingly engaging story, and a wealth of multiplayer gameplay options. Platinum wasn’t entirely successful in its efforts, but the end result is still a very interesting gaming experience that could potentially appeal to many players.

Anarchy Reigns takes place in the fictional, dilapidated city of Altambra. Actually, “city” might be too strong a term. Altambra is less “modern metropolis” than it’s a series of oversized battlefields composed of the ruins of the city. You won’t ever see civilians roaming the streets of Altambra, but you will see giant, scaly, green mutants, psychopaths toting guns that that fire freezing mist, and flying mercenaries armed with both jetpacks and laser rifles. Most importantly though, you’ll also meet the game’s cast of Cybrid Arts users.

Cybrid Arts is a fictional martial arts style utilized by the 16 core fighters (17, if you count the Bayonetta DLC) featured in Anarchy Reigns. You might think a single fighting style might homogenize the cast, but fortunately it seems that the only requirement for becoming a Cybrid Arts user is having your body massively augmented with machinery. As a result, it’s not entirely uncommon to find yourself, as a burly brawler with a dual-bladed chainsaw strapped onto his right arm, fighting against a transforming robotic jet, a fat scrap dealer with bizarrely porcine mannerisms and an addiction to mutagenics, and a psychotic little girl who color-coordinates her outfit with her electrified nunchaku. Variety is found in abundance in the Anarchy Reigns cast, and to Platinum’s credit this group of fighters is one of the best designed and most memorable in recent history.

While it’s important to remember that while Anarchy Reigns was obviously designed with a keen eye toward multiplayer combat, the game does have a single player component. Specifically, Anarchy Reigns features a split campaign in which players experience two separate, yet intertwining plotlines as the game’s leading male duo, Jack and Leo. The former is an uncouth brawler who sets out to save the life of a young girl, whereas the latter is a more agile fighter who is seeking the whereabouts of his mentor. Obviously the storyline isn’t Shakespeare, but for a fighting game it’s surprisingly ample (both sides can be completed in just over six hours), and offers plenty of reasons to punch people square in the face.

As you journey through the game’s campaign mode you’ll be rapidly introduced to the basic mechanics that underpin Anarchy Reigns. Both Jack and Leo’s campaigns feature a number of CGI vignettes that serve to expand the game’s storyline beyond simple punches and kicks, and to add a bit of extra flair to the game. While the gameplay itself is quite stylish, Platinum has a long history of creating thrilling and intense cutscenes, and while Anarchy Reigns doesn’t quite live up to the high standards set by the phenomenal Bayonetta, its cinematics are still a huge cut above what many in the industry are capable of putting together.

It’s the mission structure, however, where Anarchy Reigns‘ campaign starts to show its seams. Anarchy Reigns’ campaign revolves heavily around earning increasingly higher scores. As with Bayonetta, any of the game’s missions can be replayed over and over by players hoping to earn coveted Platinum medals for each of the game’s skirmishes. Instead of a simple high score mechanic though, these point values also allow players to unlock new missions in the game’s story mode. This could be a clever gimmick, forcing players to fight waves of weak opponents before launching into larger battles, but since the game never expressly spells out how to unlock new campaign missions most players will spend their first few minutes totally baffled as to what needs to be done. You’ll see new missions appear once you’ve punched enough random thugs to death, and once you understand this mechanic it’s quite easy and intuitive to work with, but initially it leaves a lot to be desired.

As Anarchy Reigns is focused heavily on multiplayer combat, the key purpose of the game’s singleplayer mode lies in unlocking the game’s inventive cast members. Those missions come in two flavors: Either free missions or story missions. The former are huge brawls involving multiple, weak opponents, weaponry, throwable objects like cars and explosive barrels, jets strafing the arena, and the occasional Supermutant. Completing a story mission will advance the game’s plot, but it also unlocks whichever opponent (or opponents) you just squared off against. Unlocking the entire 16-character roster will force players to work their way through both the Black and White side campaigns, meaning that even those who purchase Anarchy Reigns for the game’s multiplayer component will be forced to eventually experience the game’s singleplayer aspect.

While the game definitely has fighting game heritage, in other ways it’s something wholly unique. Platinum put a ton of work into the characters and world seen in Anarchy Reigns, and it would be a shame for players to skip over all of that just to get at the game’s competitive focus.

Gameplay in Anarchy Reigns is an amalgam of fighting game combos, beat ’em up-style crowd control, and huge stages straight out of open-world online shooters. The combat engine is simple yet robust, and while new players can immediately fire off four or five hit combos by simply mashing the game’s two attack buttons at random, experienced veterans could spend months unlocking any one fighter’s particular quirks and strategies. Fans of Bayonetta will be happy to hear that combat in Anarchy Reigns is quite similar to what was seen in that title, though necessarily simplified to better differentiate each fighter from his or her cohorts.

By itself the combat system would be unable to sustain a full game — it’s just not that deep — but that’s where all of Anarchy Reigns’ unique quirks come into play.

To give you and idea, during a simple one-on-one Cage Match while closing in for a definitive win following a brutal kick to the spine, a gigantic semi truck hauling what must have been jet fuel, jackknifed in front of the combatants blasting both, and setting them on fire. The game then offered a few options. You could chase your opponent, who in this instance rode a gust of wind onto a rooftop (like ya do). You could follow and continue the fight, or you could approach it like Alexander approached the Gordian Knot. A quick look around the neighborhood may reveal, say, a sniper rifle. It might not technically be fair according to Marquess of Queensbury rules to shoot your opponent repeatedly in the face, but it works. Of course, if that isn’t your idea of fair, the squadron of jets that carpet bombed the street to end the match probably won’t be either.

That entire exchange may take about a minute and a half on one of Anarchy Reigns’ less complex game modes. It’s a testament to the creativity of Platinum Games that entire ten-minute-long matches can play out at this insane, breakneck pace. As you’d expect, this level of chaos demands that players have a solid grasp of the game’s fundamentals. There is a learning curve there, but once you’re familiar with how one of the characters operates it’s simple to pick up and play any of the others — and this is where Anarchy Reigns really excels as a gaming experience.

Again, the combat system in Anarchy Reigns is pretty simple. Beginners and average players can very easily have a great time just mashing buttons, however, it also has enough depth that more experienced players will be able to do some very impressive things once they’ve learned the ins and outs of their chosen fighter. Mix in counters, reverses, and general fighting game fair, and combat begins to show some complexity. It is a good balance that manages to keep beginners and experts happy. That’s quite impressive, but it also brings us to the most grievous example of why Anarchy Reigns lies just short of excellence: The game offers no split-screen multiplayer options.

Thankfully, playing over the ‘net is a surprisingly excellent experience. There’s very little lag, plenty of gameplay variations, and even in the most intense moments there wasn’t any real slowdown. You choose your preferred options, then after a short period of connecting, the game dumps you directly into your battle. The online multiplayer just works.

However, given how Anarchy Reigns’ gameplay is designed to appeal equally to both beginners and veterans, it’s baffling that the game doesn’t allow multiple players to play together on a single console. The reason is obvious — given the intense graphical effects and breakneck pace of the combat, rendering multiple instances of gameplay on a single screen would force each of them to be drastically reduced in fidelity, likely to the point that the game would be unplayable — but it’s just so sad that Anarchy Reigns can never be seen as a “party game.” It would be at least as popular as Mario Party, and might even come to be seen as a more “Mature” alternative to Super Smash Bros. You can’t really fault Platinum Games for leaving out split-screen multiplayer given the graphics processing power it would require, but feel free to be be momentarily depressed at what might have been.

It’s likely obvious by now that I really enjoy playing Anarchy Reigns. It’s become my go-to “relaxation” game for when I just want to punch a whole bunch of people in the jaw until they each explode. It may not be perfect, and it has a huge number of bizarre quirks (why does the game tell me I’m going to lose unsaved data when exiting every menu screen?), but once you get a handle on it, Anarchy Reigns is just an exceedingly fun experience featuring a group of characters that are easy to love and gameplay that’s more complex than you’d expect at first glance. Every time I’m cut to shreds by a malfunctioning excavator or collapse in the midst of a poison gas cloud I get a little smile on my face because the idea that the game’s levels are even more dangerous than my opponents is very entertaining.

You could slam Anarchy Reigns for its crazy plot, ridiculous aesthetics and unrealistic combat, but that would be missing the point of this game: It’s supposed to be stupid, crazy fun. In that regard, Platinum Games has been amazingly successful. If nothing else, Anarchy Reigns is a smart mashup of disparate gaming styles that could have gone wrong in so many ways, yet is saved by novelty and the brilliant design chops of Platinum Games. Hate the game’s style if you’d like, but given that Anarchy Reigns hits retail today at the bargain price of $30, it’s hard to argue its overall entertainment value.

(This game was reviewed on the Xbox 360 via a copy provided by the publisher.)