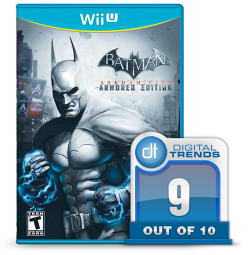 The critical conversation surrounding Rocksteady Studios’ Batman: Arkham City happened in fall 2011 when the game was originally released for PlayStation 3, Xbox 360, and Windows platforms, but we turn our attention to it again now for a look at the independently developed enhanced Wii U port, Batman: Arkham City Armored Edition. Before you read any further, know that the same outstanding Rocksteady game is still here, complete with Catwoman’s story content, the Harley’s Quinn’s Revenge DLC, and a variety of addition challenge packs and skins DLC. If you’d like to know how the bulk of the game stacks up, the observations made in our original Batman: Arkham City review still apply.

This is great news for new Wii U console owners, as Arkham City was already must-play material. If you never got to enjoy Rocksteady’s game on any of the other platforms, you can look forward to having a fundamentally similar experience on your Wii U. The tablet-like GamePad introduces some additional quirks and new B.A.T. Mode armored suits bring a new wrinkle to combat, but the Caped Crusader’s memorable journey through the crime-ridden streets of Gotham City’s neighborhood-turned-prison is fully intact.

In Armored Edition, the Wii U GamePad becomes a sort of mobile Batcomputer. You’ve got an expected array of touch-based controls offering quick access to different map views (including sonar), objective/location info, upgrades, and collectibles to be found in the immediate area. You won’t be looking at any of this when you’re in the middle of a combat encounter, but having that wealth of information just a downward glance and maybe a quickly thumb swipe away is certainly useful. Perhaps not game-changing, but a worthwhile use of the second screen.

Pressing up on the D-pad brings up a second touchscreen featuring your array of unlocked gadgets. You can tap on any of these options to quickly equip them, though the combat applications for this quick access are limited since the action doesn’t pause when you’re in the sub-menu. Alternatively, any of the gadgets can be dragged to the desired point on a pictured D-pad icon to create quick-swap options.

The GamePad screen also offers a second view of the world around you at certain points. Investigating crime scene from a first-person perspective Detective Mode uses tilt-based aiming in tandem with your analog sticks, creating the nifty sensation of actually scanning your own, personal Batcomputer around as you search for clues. You’ll also use  the same tilt-based aiming to steer Batman’s remote-controlled Batarangs. The touchscreen also allows you to detonate explosive gel by tapping a little icon, though the button-based command is still the preferable option here.

For those who would prefer to have TV on in the background or take their Arkham gaming into another room, Armored Edition also allows for the full game to be played straight from the GamePad. You’ll lose a few of the newer features, such as the touch controls and the nifty way that game audio is split between your TV and your tablet controller — something we’re seeing a lot of in Wii U launch titles — but you’ll gain the benefit of being able to explore Rocksteady’s open world on a smaller screen. Not the ideal way to experience the story, but great for snatching up those lingering Riddler trophies.

The marquee gameplay tweak in Armored Edition — in fact, the one that it is named for — is amusingly not at all the star of the show. The combat enhancements introduced by B.A.T. Mode certainly add a new layer, but it’s not anything that couldn’t have been implemented on another platform. Basically, there’s a new meter added to the HUD that fills as you fight, showing how much kinetic energy you’ve stored away in your enhanced suit. To use it — adding some additional punch to your attacks — simply tap the icon on your GamePad screen or click the left and right analog sticks simultaneously.

All eyes are of course also on the presentation of what is widely agreed to be a beautiful game. This is Nintendo’s first HD console, after all. Does the Wii U version of Arkham City stack up? Ehhhhhh… not exactly. Even at 1080p, there’s a softness to the image onscreen that you don’t get from any of the previously released versions of the game. It certainly still looks beautiful, it’s just lacking some of the crispness that you see on other platforms. There technical performance is also a little bit choppy. The game skips and stutters a bit more frequently than you would expect, and frequently enough to be noticeable.

All that said, it’s also worth remembering that this is a game that was built for other platforms and then handed off to a new developer to be ported. While that certainly doesn’t excuse the game’s shortcomings, it also means that you shouldn’t judge the console too harshly here. Armored Edition is the first of many multi-platform games that will also be coming to the Wii U before development for the new Nintendo console is actually on track with games that are currently in production. In other words, those who want to look at Armored Edition‘s faults as an indicator of what to expect from the Wii U in the future… don’t bother.

Batman: Arkham City Armored Edition might not be new, but it’s a multiple Game of the Year award-winning effort that launches alongside Nintendo’s new console. If you’ve never played it before and you’ve got a shiny, fresh-out-of-the-box Wii U, then it should absolutely be on your list of must-play games. There’s less value here for those who previously played Arkham City on other platforms, especially if you also indulged in the meatier bits of DLC. The same great game is here, but it’s impossible to escape the fact that, in all of the ways that matter, it is still the same great game.